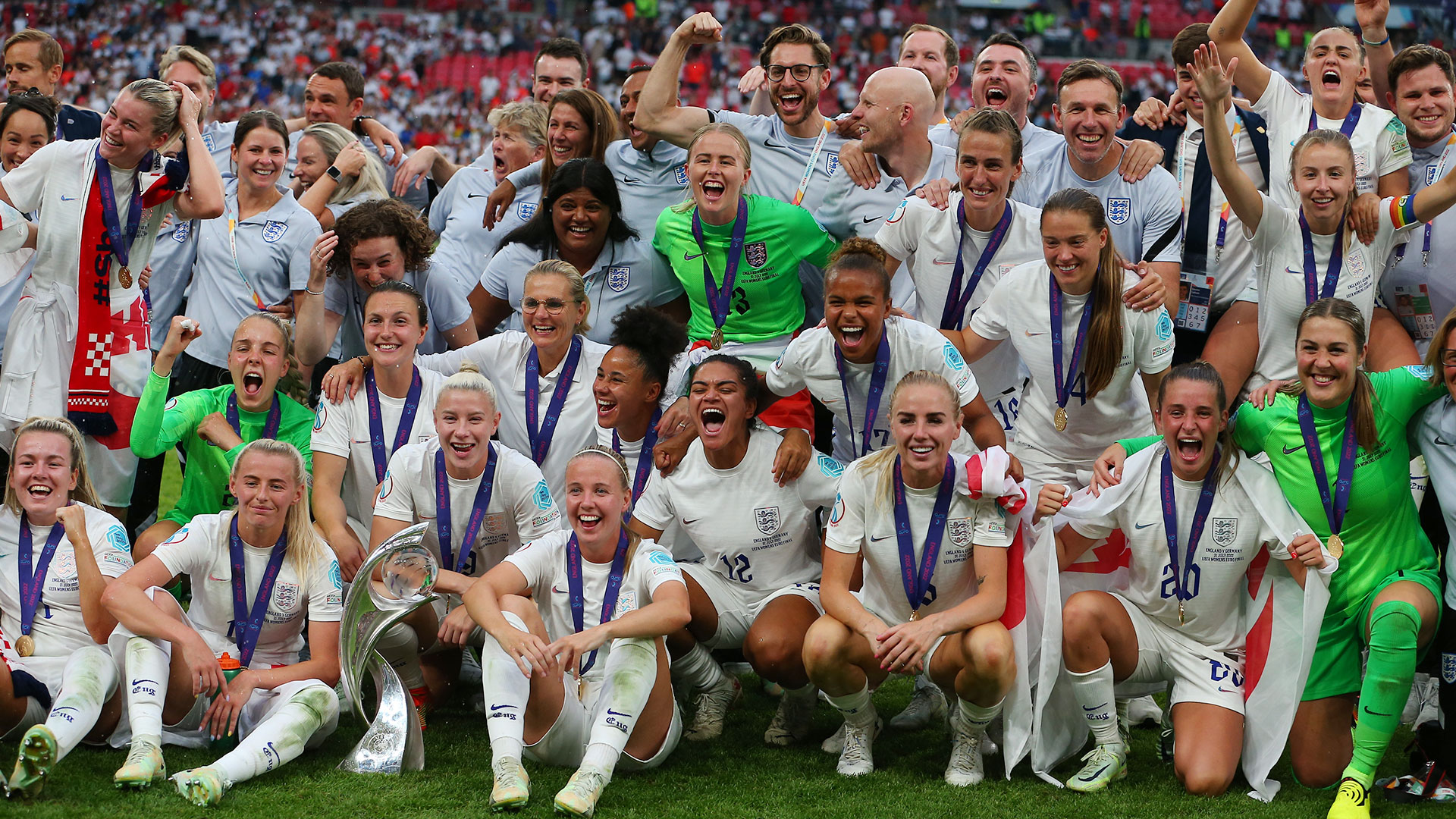 Never mind that Jack Grealish is 100 million times more expensive than Lucy Bronze, or that Harry Kane earns more in a week than counterpart captain, Leah Williamson, does in a year.

On Sunday night 23 fearless young women boldly stepped away from the stove, popped down their Marigolds and casually thumped Germany 2-1.

(Spared penalties, the extra-time victory meant the girls were probably still home in time to cook their husbands’ and partners’ tea. What a boon.) I jest, of course.

The Lionesses’ stunning Euros triumph has united a weary nation. These women are now household names, with a dedicated fanbase to boot.

Surely this hard-working squad, led by the eminently sensible Sarina Wiegman, will now be made Dames?

But in succeeding where so many men before them have failed, July 31, 2022 must mark a societal change. For good.

From now on, women’s sport must be taken every bit as seriously as the men’s — with the lucrative deals, endorsements and spin-offs that follow.

Over the past two weeks opportunistic brands have been whippet-fast in coming out to publicly back the Lionesses.

Which begs the question — where were you chaps 20 years ago, when grassroots women’s football was played at High Wycombe Rec watched on by two men and a dog?

Where were you when me and my ten-year-old pals were playing in boys’ cast-off kits, bleakly putting on shin pads in the Men’s Fourth XI changing rooms?

And where were you when women faced endless “gags” about the length of our shorts, and our ability, or lack thereof, to understand the offside rule?

They were busy ploughing millions into the soulless men’s game, that’s where.

As if female footballers haven’t faced enough hardship over the years — not least getting banned by the FA in 1921 — last week they saw themselves dragged into the toxic culture wars.

Because referring to the Lionesses as, er, “lionesses” is sexist, apparently.

According to an earnest female caller on Radio 4’s Woman’s Hour — one who happily vented her sexist concerns to a show called “Woman’s Hour” — the moniker is degrading and chauvinistic.

No. It’s branding. It’s commercial gold. And it’s helped capture the country’s imagination, and given these talented athletes a platform they’d have thought unimaginable as schoolgirls.

After decades of being second-class citizens, now is not the time to be stubbornly proud. So, what next?

The FA and the WSL have a responsibility to keep this momentum going. Sky and the BBC recently signed a vastly improved broadcast deal to get more club games aired.

As if female footballers haven’t faced enough hardship over the years — not least getting banned by the FA in 1921 — last week they saw themselves dragged into the toxic culture wars.

Crucially, ALL schools must open up football to girls. Not all girls want to mince around a netball court — I certainly didn’t as a football-loving eight-year-old.

The media, too, must continue to champion these stars.  But this also means the players taking the rough with the smooth.

If Grealish — who signed for Man City for £100million, compared to Bronze’s recent free transfer to Barcelona — gets filmed stumbling out of a nightclub, hammered, he would rightly expect to see the resulting pictures in the papers.

These women, the majority of whom quietly carry out charity work on the side, are role models. If they err, they should be prepared to face the consequences — just as Grealish and pals have done, with relative good grace, over the years.

Their relationships will be documented and discussed, their supermarket shops snapped on Twitter, trolleys examined, at length. Just ask Erling Haaland.

With fame and success comes the irritating burden of responsibility.

If we, as women, want equality, it works both ways.

KYLIE SMOOTHS HER WAY BACK TO THE NINETIES

RIP the childhoods of anyone aged 35-55.

Forget Hollywood’s Guy Pearce, Margot Robbie and Chris Hemsworth, it was Jason Donovan and Kylie Minogue – plus her Miraculous Non-Moving Forehead® – who stole the show.

DANNI Winrow is an inspiration.

The 25-year-old, sick of cruel comments about her glass eye, has swapped it for a sparkling gold version.

It – and she – looks brilliant.

For all young kids out there with a disability, Danni demonstrates perfectly how difference should be celebrated.

GO on to YouTube and select a clip of Rishi Sunak speaking.

And I defy you not to hear Will from The Inbetweeners. Try it.

ROME’S Colosseum has been valued at £65billion.

A snip at half the price.

According to a report by Deloitte, this factors in both the “economic and social value” of the historic amphitheatre.

Alas, my only memory of this ancient, crumbling structure is keeping watch as my mother enjoyed a giant wee under an arch as tourists flocked past.

As a quietly seething 12-year-old, it doesn’t get much more embarrassing.

ANNOYANCE of the Week: People rabbiting away over Bluetooth on public transport.

And a special mention to the lady, and her ginormous headphones, on the 9.06 South Western train to Waterloo last Wednesday.

I hope you dumped your cheating boyfriend, enjoyed that night’s homemade quiche Lorraine and nailed your midday PowerPoint presentation.

AND to think more poor trees have to die for this.

Not content with his co-written previous bestseller, Finding Freedom – a fairly exhaustive account which included such scoops as Harry uses the ghost emoji, Meghan likes sweets and the couple once ate a Sunday roast on a weekday (the rebels!) – he’s penning another book, promising a “new chapter of the royal story”.

We await with bated breath.

She says: “Suddenly my body wasn’t where it was supposed to be and someone I couldn’t see was asking me my age.

“I couldn’t work out why anyone would need to know that in the middle of a discussion about Ukraine and I remember thinking how rude it was for either candidate to ask.”

As any woman knows, only a qualified medical professional can get away with the age question.

CONGRATULATIONS to the internet wag who captioned this meme presently doing the rounds on social media.