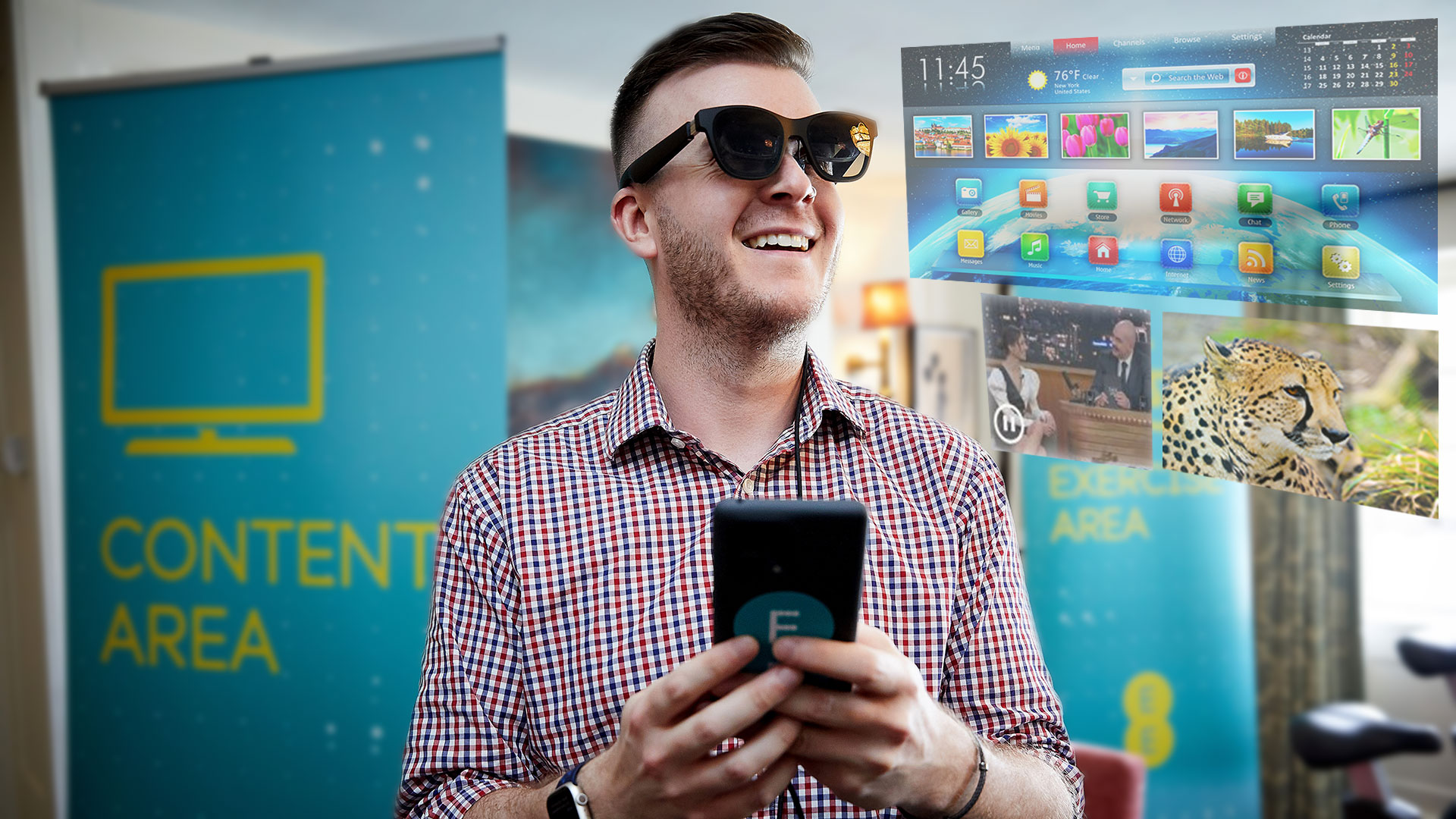 
I DIDN’T think it was possible to pack a 201inch screen in my pocket – until now.

EE has launched a brand new augmented reality headset with a company called Nreal, which allows you to magically project your very on massive virtual TV.

No one else can see what you see.

After the disappointment of Google Glass, I wasn’t sure what to expect but the results are pleasantly surprising, though this is just a brief first impression hands-on.

My only concern is I may become even more antisocial now that I can watch, play and do what I like with a pair of normal looking glasses on.

The Nreal Air has two modes – one which mirrors whatever you have up on your phone, and another where you can place virtual screens all around your real world environment.

The latter is the real star, allowing you to position several massive displays around the place.

At one point I had two huge YouTube videos playing to my left and right, with a news site in the middle.

Using a smartphone, I can beam a virtual laser to select things in front of me.

So you can make the screens bigger or smaller, closer or further, and move them around the room.

While this virtual controller is essential, it is a bit fiddly when you’re trying to tap small things, like the X to close a window.

I can totally see a sports fan watching various events at the same time for the ultimate experience – imagine having a live match on BT Sport on one screen, with Sky Sports News on another, and a Twitter feed on a third.

And best of all, no one else can see what you’re looking at – this is for your eyes only.

That level of privacy is great, but I also dread to think how it could be misused while sat on a packed commuter train…

This is still early days though.

We got to try a biking experience video while on an indoor bike, which certainly made it less boring, but it isn’t very interactive at the moment.

Creators are hoping that developers will eventually fill those sort of gaps.

The other snag is some of the big players like Netflix don’t work – not on the best feature anyway.

This means you have to use the second option, smartphone mirroring, which copies whatever you’ve got running.

When you move your head, the screen moves too, so it can be quite disorientating.

If you can manage to keep your head still, great.

The same goes for game streaming with the Xbox app – it’s great to play a game this way but you’ll need to stay still.

Another big issue is it only works on Android – that rules out a load of iPhone loyalists.

It’s wired too, though we didn’t find it awfully obstructive in early testing.

People might think you look a bit bonkers waving your phone in the air as well, but that’s their problem.

It also features open ear speakers which do the job but the sound is not perfect.

Pairing up some Bluetooth headphones instead would probably work a treat.

If you don’t fancy seeing it augmented in your real world environment, there is a blackout visor you can clip on top, which makes the screens even clearer.

They’ve even thought of those who wear glasses, with an attachment you can take to your optician for prescription lenses to be fitted.

But the visual quality packed into this is really good for such a small device.

It really does make entertainment more exciting – and private.