I could’ve spoken to Wills all day, says Deborah James as she gets Damehood 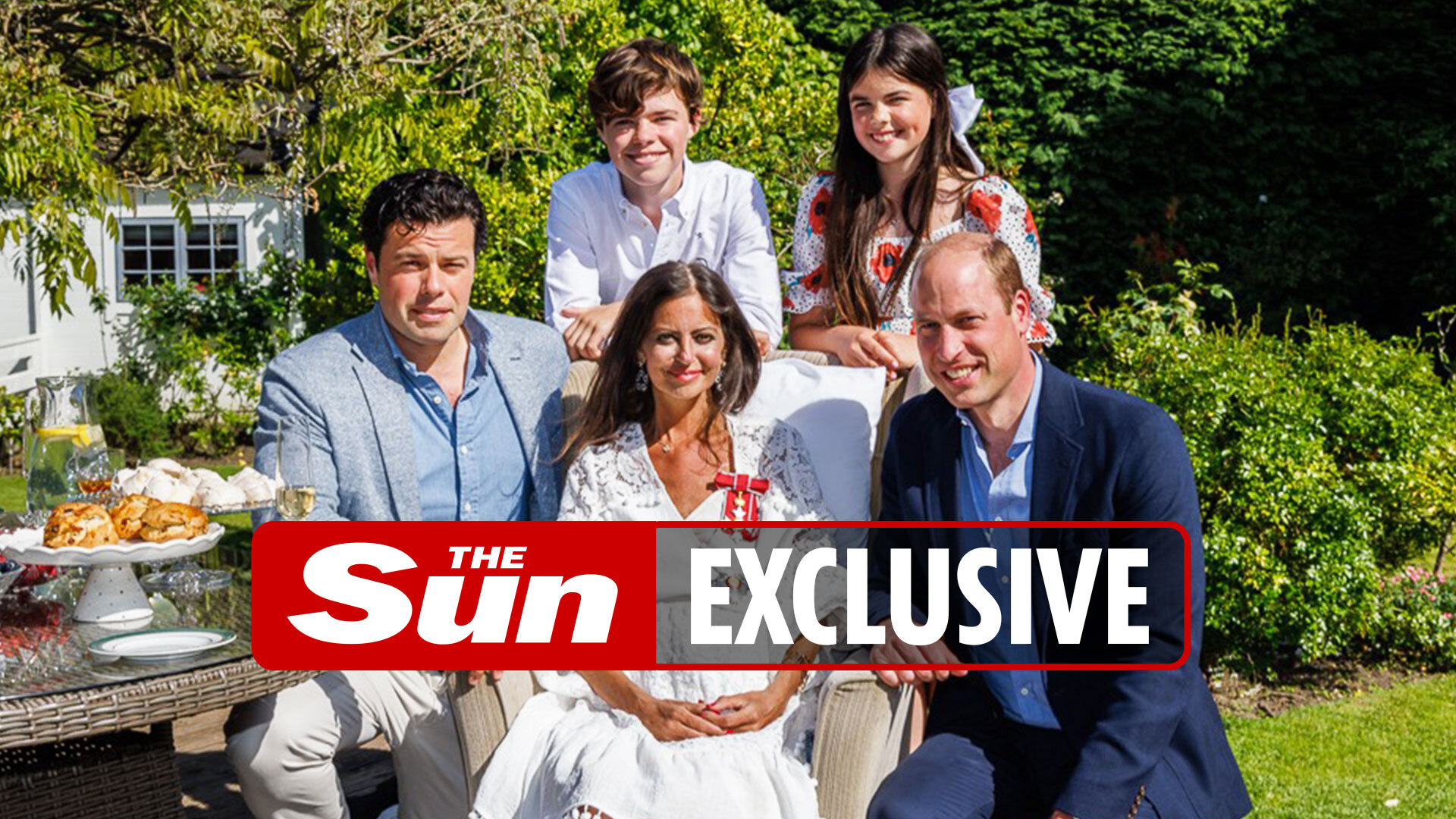 
PRINCE William presented UK Times’s cancer campaigner Deborah James with her Damehood — just a day after it was announced.

In an “unprecedented” move, the Duke cleared his diary to do the honours at a tea party at her parents’ home in Woking, Surrey.

Mum Deborah, 40, on end-of-life care, told UK Times that William is welcome to join her for tea and Champagne anytime after being awarded her honour in a moving ceremony.

He was “extremely generous” with his time, and was understood to have cleared his diary when he received Deborah’s invitation.

The father of three spent time speaking to Deborah’s two children, Hugo, 14, and Eloise, 12, offering words of advice and guidance.

Wills, whose mother Princess Diana died when he was 15, told them he had been through something similar.

Deborah’s family put on a traditional afternoon tea with scones and bubbly — and said the “down-to-earth” Duke enjoyed a smoked salmon sarnie.

Reflecting on the “surreal” day, Dame Debs told UK Times: “The Duke was so charming and put all of us at ease immediately.

“He was incredibly engaging and generous with his time, I could have spoken to him all afternoon.”

Normally, Damehoods and Knighthoods are announced only twice a year — at either the New Year Honours or Queen’s Birthday Honours.

But because of Deborah’s circumstances, Kensington Palace, Buckingham Palace and No10 pulled out all the stops so the honour could be conferred.

But Debs became a Dame in a day after it was announced — a tribute to how her story and fundraising touched the hearts of the nation and the Royal Family.

Yesterday she and Wills chatted for half an hour.

Dame Debs said: “We shared some really interesting ideas of how the BowelBabe Fund could continue to support the great work for Cancer Research UK and the Royal Marsden.

‘HONOUR TO HAVE HIM ROUND’

“It was an honour to have him round and he’s welcome for tea and champagne any time.”

She added: “I got really emotional when I was presented with my honour. It’s a memory that my family and I will treasure forever.”

Deborah decided to be with proud parents Heather and Alistair to spare her children seeing their family home in South London full of medical equipment.

She explained: “It means the kids can go back there and they don’t have those scars everywhere. It can continue to be their home without those memories.”

Wills also talked to Heather and Alistair, Deborah’s husband Seb, brother Ben and ­sister Sarah, as well as her kids.

He even posed for treasured family snaps. Dame Deborah added: “I could’ve stayed with him all ­afternoon.

“As President of The Royal Marsden he is clearly passionate about the hospital and he was deeply knowledgeable about how the BowelBabe Fund could have a meaningful impact.”

She was diagnosed with Stage 4 bowel cancer aged 35 in December 2016, and was given an eight per cent chance of living five years.

Yet, “riding on the wings of science” as Deborah described it, she defied the odds time and time again.

Last year she celebrated her 40th, and the five-year milestone.

However last summer the drugs that had been keeping her alive — which did not exist for bowel cancer patients when she was first diagnosed — stopped working.

Her liver started to fail. Repeated operations led to four bouts of sepsis, and in January husband Seb rushed Deborah into hospital, where medics saved her life after finding a major internal bleed.

On Monday, she shared a heartbreaking Instagram post saying she was now receiving end-of-life care at her parents’ home in Woking, Surrey, because the heroic efforts of her team of medics at The Royal Marsden Hospital in South West London were now fruitless.

She said her body “simply isn’t playing ball”, adding: “My body is so emaciated that I have no choice but to surrender to the inevitable.”

In her final column for UK Times, she said: “My body just can’t continue anymore.”

Yet, in typical Deborah style, she was determined to give her campaigning one final push.

She launched the Bowelbabe Fund, to raise money for Cancer Research UK, The Royal Marsden and Bowel Cancer UK.

Last night it had topped £5.2million.

Kensington Palace was understood to have cleared The Duke’s diary when he received Deborah’s invitation, having offered to drop her award off at the front door so as not to disturb her.

Official confirmation of her Damehood came at 10pm on Thursday, hours after UK Times launched a campaign for it.

Seb, her husband of 13 years, said: “It has brought a piercing ray of light and hope into this, the darkest of times.”

‘You will live on in all of us’

SUN readers have paid tribute to “inspirational” Dame Deborah James after she captured the hearts of the nation with her brave account of having bowel cancer.

Here are some of their messages.

Sharon Simmons: “Not all superheroes wear capes but you are truly my biggest hero. Thank you for all your fantastic work.”

Jackie Leverton: “You are such a kind, lovely, brave and inspirational young lady. You will live on in all of us.”

Jan Owen, who has colon (bowel) cancer: “Your positivity and the way you always try to look good really makes me want to do the same. It really does lift the spirits of fellow sufferers.”

Debbie Aris: “Deborah, you are one inspirational lady who deserves this Damehood more than anyone. If the world was full of Deborahs, what a beautiful place it would be.”

Giselle Walsh: “As a mother, my heart aches for you. I’ve woken up this morning holding my babies that little tighter, thankful I am able to do so.”

Janey King: “Deborah is an inspiration to us all. She is one force to be reckoned with.”

Marie Leadsford: “You are such a brave lady, I cannot imagine what you and your family are going through.”

Teresa Griffin: “The path you have had to walk the past five years. So, so painful but so inspiring, no braver story.”

Kerry Cutts: “You and your family should be so proud of what you have achieved. Sending love to you all.”

A source told UK Times: “William and Katherine were extremely moved by Deborah’s story, both being parents themselves, and were blown away by her campaign.

“William moved heaven and earth to make sure she got this award that she so richly deserves.”

The Cambridges earlier tweeted: “Every now and then, someone captures the heart of the nation with their zest for life and ­tenacious desire to give back to society. @bowelbabe is one of those special people.

“Deborah, our thoughts are with you, your family and your friends.

“Thank you for giving hope to so many who are living with cancer.”

IT is pretty clear that William has, like the rest of the country, been profoundly moved by this lovely lady’s terrible plight.

Because for starters, what he did yesterday was unique.

I’ve never seen the Royal family move so quickly to do something like this.

It started with the Queen speedily granting the damehood — something which is also unprecedented.

The fact the Duke of Cambridge then went out of his way to­ ensure she got her beautiful medal and be made officially a dame by him in person is so typical of him.

He takes investitures incredibly ­seriously — and this one was no exception. And his kindness and compassion is incredible.

William will have had little prior warning about the visit and his protection officers will not have been able to do their usual thorough checks, but he did it anyway.

He will never stop surprising me. It’s just such a superb thing for him to do.