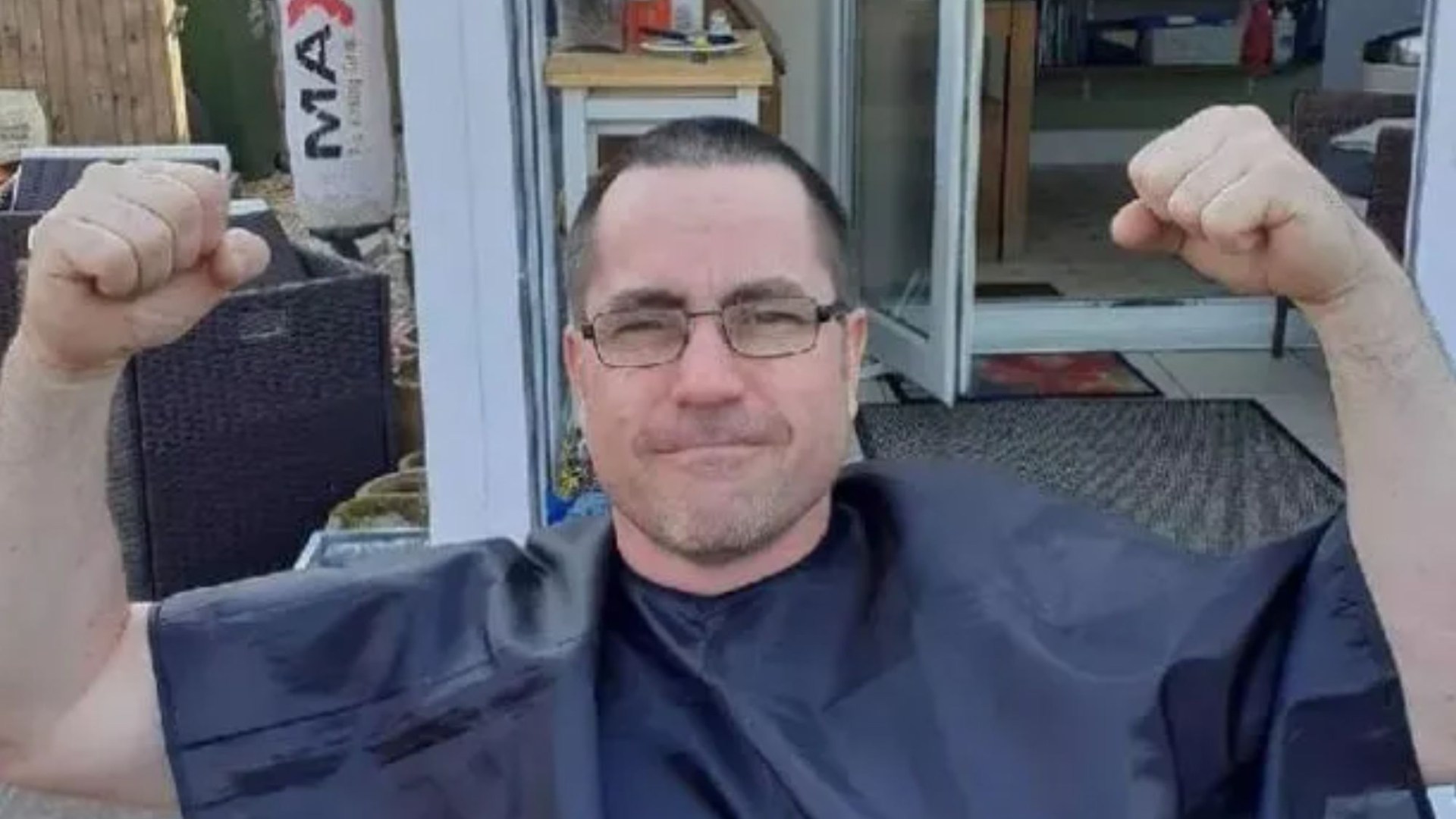 
A DAD says he can no longer hug his wife and kids after he was struck down with a devastating disease – and even the slightest thing can set it off.

Up until 16-months-ago, Dominic Alderson lived a normal and healthy life with his wife and two kids until out of the blue he developed horrific spasms that would make his body go stiff for up to half an hour repeatedly throughout the day.

The slightest touch from another person or object, loud noise, certain smell or tiredness would be just some of the things that could instantly set off another episode.

The 49-year-old, of Barnstaple, was sent for tests at North Devon District Hospital where he was seen by a neurologist who was able to diagnose Stiff-Person Syndrome (SPS).

Despite it only affecting approximately one in 200,000 individuals, both male and female, fortunately for Dominic the doctor had seen it once before in his career meaning he had a rare early diagnosis for someone typically with the disease.

Since April 2021, Dominic has been put on different medications to control the spasms and has had to learn to avoid triggers which set them off.

The most heart-breaking is not being able to cuddle his wife and children because even someone slightly brushing against him will immediately start convulsions.

On a bad day, it can happen eight times throughout the day and night. It also affects his speech and he has developed small ticks.

The former youth football coach said: “How I describe it to people is that it’s like Parkinson’s Disease but whereas Parkinson’s attacks the brain, SPS attacks the brain stem and spinal column and that’s why you get a build-up of anti-bodies in your joints and when that builds up you have spasms.

“The spasms can come from anywhere in your body, but mainly down my left-hand side. They don’t feel painful but what comes after is rigidity.

“Your limbs lock up and it can feel like you are about to snap. Your body can get into very weird shapes.

“I take drugs to relax my muscles so they don’t spasm and immunosuppressants to help with my immunity system, along with other medication. Muscle relaxant drugs immediately release it.

“People’s bones have been known to break during seizures so I try to keep my bones as strong as possible by going to the gym.

“Sometimes there are warning signs before a spasm but sometimes it’s like boom; it’s just the way it is. It’s not the most pleasant of diseases and everyone who has it is different. My wife calls it a ‘devastating disease’.

“I can touch people but they can’t touch me because I go into a spasm. It means I can’t hug my wife and kids.

“It is even triggered by something brushing against me. For example, I was out walking the dogs and my wife threw a ball for them which brushed past my arm sending me into a spasm.”

SPS is characterised by progressive stiffness and painful spasms in the back and limbs which are often triggered by touch, noise or anxiety, and exacerbated by movement.

It is a progressive condition, but only exceptionally does stiffness increase to the extent that the person will require the use of a wheelchair.

About 40 per cent of individuals also have type 1 diabetes.

There is no cure but symptoms can be controlled in the majority of individuals. The most effective drug treatments are diazepam and baclofen which help reduce stiffness.

Dominic said: “Before I was diagnosed, certain things had been happening to me during the last week or so. It was during Covid and I had been furloughed a few times and made redundant from one job.

“I have found another job and was working nights and days. I used to go to the gym a lot but it was shut due to Covid regulations.

“Certain things were happening to my body and I used to joke I was getting Tourette’s because I would start shaking and convulsing. I thought it may be my body reacting to a change of job and not going to the gym.”

Since his diagnosis, Dominic has lost two jobs but as he was turned down to receive benefits, he has to work full-time to keep their family home.

He currently works as a CNC operator setter.

Despite it being a “noisy job’”, as the sounds are constant and reduced by wearing ear defenders, it does not set off Dominic’s condition.

He said: “At the moment working is manageable, but I don’t know how long for. When I wake up in the morning my body is like in a state of shock so I find it very hard to move. My muscles are pulling in different directions so I walk funny. It’s only half an hour into my work shift that I’m fine.

“But when I get home and sit down I will seize up and struggle to walk.”

As Dominic now struggles to walk upstairs, adaptions need to be made to their family home.

To help fund the works, Dominic’s daughter Becca, 16, is bravely embarking on a 15,000ft skydive on August 24.

The online fundraiser has so far raised more than £500. Any leftover money will be donated to the SPS Trust.

Dominic, who also has a 14-year-old-son said: “I would like to join her but I’m pretty sure they won’t let me. I’m very proud of Becca for what she is doing when she already does a lot for me.”

Currently, the future for Dominic looks like one dominated by continuing to take drugs to control his symptoms.

He said: “I was previously on immunoglobulin treatments and plasma therapy but that’s stopped because it was costing too much on the NHS. It subsided the spasms quite a bit.

“I am currently seeing a professor in Birmingham who is studying SPS and I’m hoping he will ask for me to try it again for a certain period of time to record what happens. There is a cancer treatment drug which can dull SPS symptoms but it’s also a dangerous drug as it can have serious side effects.”

Anyone wanting to donate to Dominic’s fundraiser can click here.