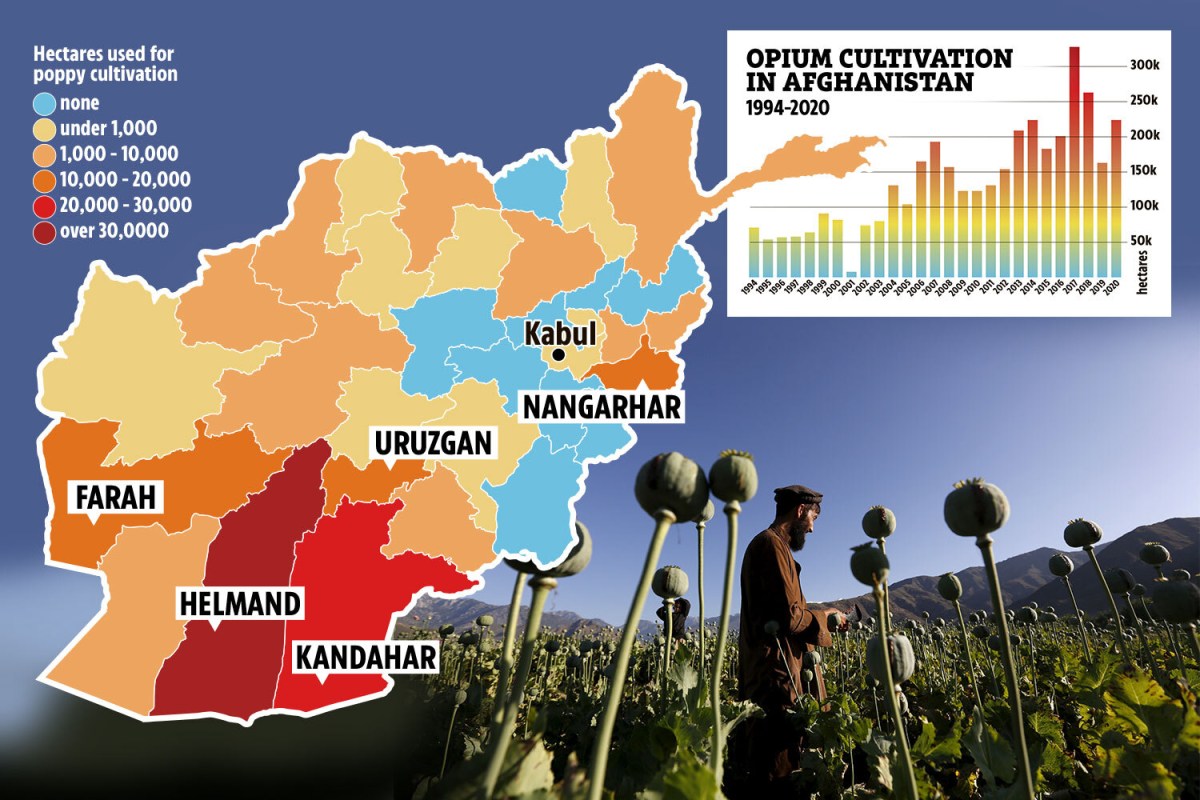 
THE Taliban are stronger and richer than ever before after creaming BILLIONS from the world heroin trade over the last 20 years, experts have warned.

As the United States wraps up its longest war, Afghanistan remains the world’s largest producer of opium and looks certain to remain in the top spot as the “victorious” Taliban snatches power in Kabul.

The speed of the Taliban’s victory has shaken the world and comes just weeks after troops from the US, UK and other NATO countries left the war-torn country.

And some UN and US officials worry Afghanistan’s slide into chaos will create the perfect conditions for a boom in opium production – which could prove to be a colossal boost to the Taliban’s strength.

The Taliban, who ruled Afghanistan from 1996 to 2001, has long been involved in the country’s mammoth narcotics trade, experts said.

From opium extraction, trafficking and “taxing” drug labs to charging smugglers fees for shipments bound for Africa, Asia, Europe, Canada, Russia, and the Middle East, the Taliban fanatics have reaped millions from the trade.

And the US military estimates the Taliban earns a whopping 60 per cent of their annual income from the trade.

Most of the poppy growing takes place in areas under Taliban rule and the militants run a sophisticated financial network and taxation system to pay for insurgent operations, the BBC reports.

It’s thought the Taliban’s grip on such a massive slice of Afghanistan’s lucrative drug trade will have allowed the terror group to prepare for its stunning advance to power in recent months.

“The Taliban have counted on the Afghan opium trade as one of their main sources of income,” Cesar Gudes, the head of the Kabul office of the UN Office of Drugs and Crime, told Reuters.

“More production brings drugs with a cheaper and more attractive price, and therefore a wider accessibility.”

With the insurgents overruning Kabul on Sunday, “these are the best moments in which these illicit groups tend to position themselves” to expand their business, Gudes said.

Washington spent an estimated $8.6 billion between 2002 and 2017 to throttle Afghanistan’s drug trade in order to deny the Taliban funds, according to a 2018 SIGAR report.

But retired US Army General Joseph Votel said the airstrikes on suspected heroin labs and other measures “didn’t really have much success”.

Instead, experts said the US measures stoked anger against the government in Kabul and its foreign backers – and sympathy for the Taliban – among farmers who depended on opium production to feed their families.

“We’ve stood by on the sidelines and, unfortunately, allowed the Taliban to become probably the largest funded non-designated terrorist organization on the globe,” a US official with knowledge of Afghanistan’s drug trade said.

“The US and international partners have continued to pull out and not addressed poppy cultivation,” the official said. “What you’re going to find is that it has exploded.”

The Taliban banned poppy growing in 2000 as they sought legitimacy on the international stage – but they faced a huge backlash and changed their stance.

Brookings Institution scholar Vanda Felbab-Brown said the ban ignited “a huge political storm against the Taliban and it was one reason why there were such dramatic defections after the US invasion”.

It means the Taliban is unlikely to slap a ban on poppy cultivation should they gain power today, experts said.

We’ve stood by on the sidelines and, unfortunately, allowed the Taliban to become probably the largest funded non-designated terrorist organization on the globe.

Three of the last four years have seen some of Afghanistan’s highest levels of opium production, according to the UNODC.

Even as the Covid pandemic raged, poppy cultivation soared 37 per cent last year, it reported in May.

Barnett Rubin, a former State Department adviser on Afghanistan, said the drug trade is “the country’s largest industry except for war”.

The estimated all-time high for opium production was set in 2017 at 9,900 tonnes worth some $1.4 billion in sales by farmers or roughly 7 per cent of Afghanistan’s GDP, the UNODC said.

“A future government will need to tread carefully to avoid alienating its rural constituency and provoking resistance and violent rebellion,” Mansfield said.