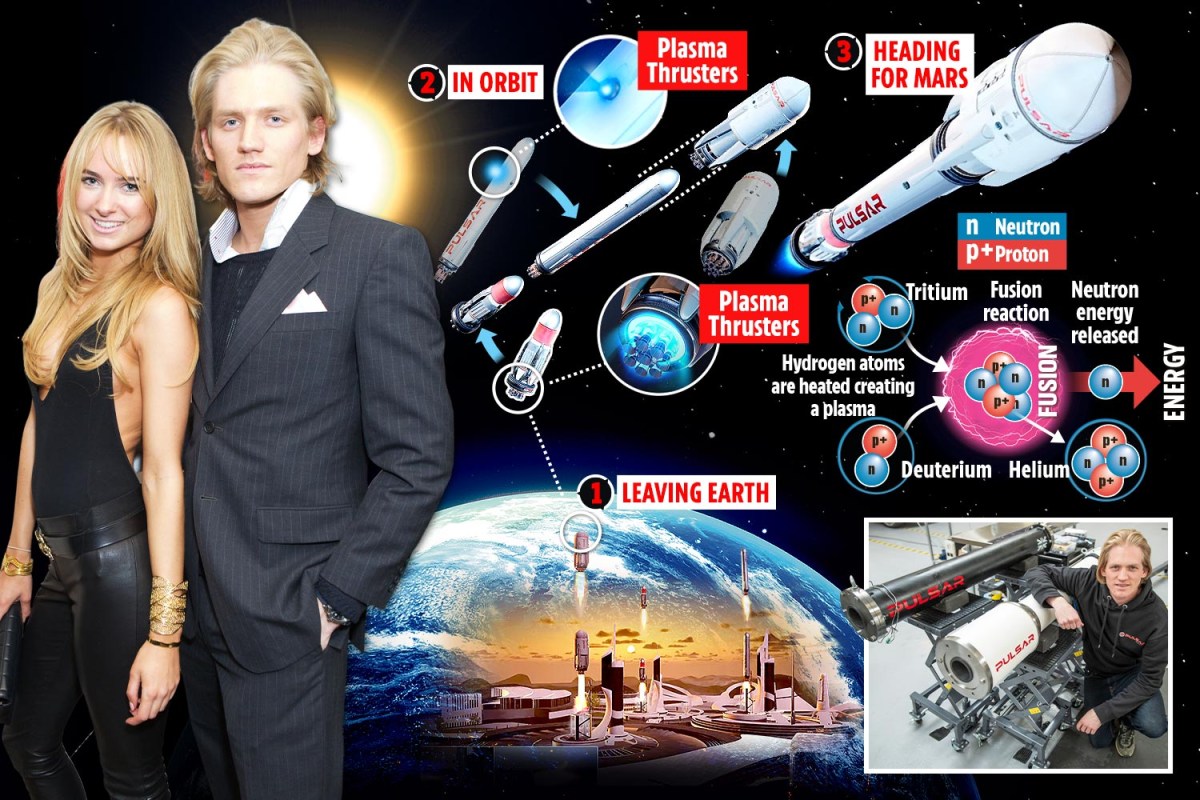 
MOST of the toffs who appear on TV’s Made In Chelsea dream only of becoming reality stars.

But floppy-haired Richard Dinan is different. He spent much of his time on the E4 show dreaming about how to make a reality of travelling to the stars in the galaxy.

Since leaving MiC nine years ago, Richard, 35, a friend of Prince Harry, has become a ROCKET SCIENTIST.

Now he and his team of boffins are developing a pioneering nuclear-powered spacecraft to carry humans to the outer reaches of the universe.
Richard boldly predicts: “This could save humanity.”

Doing all this in a warehouse on the outskirts of Milton Keynes is a far cry from his days in series three of MiC, when he wooed co-star Kimberley Garner with a helicopter flight to a luxury restaurant — only to find she was seeing someone else.

But when Richard, whose cousin is Prince Harry’s ex Cressida Bonas, quit the series in 2013 he wrote a book all about the real love of his life, nuclear fusion.

He is still in touch with co-stars Ollie, Kimberley and former lover and I’m A Celebrity contestant Georgia Toffolo, who all are all now following his space dream.

He says: “Being the bloke from Made In Chelsea can be a good thing. But it has handicapped me in the way that people are keen to tear me down. So I’ve had to do my research doubly hard.”

But for years he has been fascinated by the world of nuclear fusion, which is how the sun creates endless energy.

Since leaving MiC, he has worked night and day to find a way to use nuclear energy to create a hyperspeed rocket that is capable of taking astronauts to other solar systems — just like in 2014 superhero movie Guardians Of The Galaxy.

This is no pie-in-the-sky venture. The Government and Nasa scientists are backing him with money and expertise, and he is convinced that within five years Pulsar Fusion, the company that he has founded, will put a rocket into space.

And not just any rocket, but one that will be able to travel at up to 217 miles a second and carry astronauts to Mars in just two weeks instead of the nine months current technology would take.

Richard hopes that his team’s invention will even enable humans to find a new home in space.

In the unlikely setting of his warehouse next to an empty carpet-tile depot near MK Dons’ football stadium, his £200million dream is slowly coming together.

Here Richard and his team have built a nuclear fusion reactor which creates the ultra-high vacuum needed to produce a “mini sun” inside a stainless steel vessel that resembles a small space-craft. Nearby, two prototype rockets which will take the mini reactor into space lie side by side in the hi-tech workshop.

They have already been successfully fired, at the UK’s National Propulsion Test Facility at Westcott, Bucks, and on a track in Switzerland.
Flicking back his long, blond hair, Richard says: “Fusion offers two things, ability to provide all the energy the Earth will need for ever, and the ability to leave our solar system. It could save humanity.

“The Alpha Centauri star system, which has habitable planets, is more than four light years away, 25trillion miles. Currently it would take many hundreds of lifetimes to get there.

But with nuclear fusion the journey would take just 11 years.” Nuclear fusion is a way of copying the way the sun fuses atoms into a plasma that creates intense heat and light, which could give the world limitless cheap low-carbon energy.

Fusion is safer than nuclear fission — where atoms are split to create electricity and bombs — but it is harder to create and control.
Apprentice gunsmith

Richard says: “I know fusion works. Scientists tried for a century but couldn’t stabilise it. It would vibrate, like water coming out the tap pretty quickly, and that is chaos theory. But today fusion reactors are starting to work.

“That is because super-computers are getting better, magnets are getting better and we understand how to hold that plasma to the point where we get energy out. Nuclear has a bad name because humans used its power to create weapons but there is a totally safe, clean other side to it.

“Similar technology that allowed us to do the worst thing we have ever done will give us the ability to do the best thing we will ever do — generate abundant, powerful clean energy.”

Building a nuclear fusion power station would cost billions and take ten to 15 years. Richard does not have that much time or money. Instead he wants to use nuclear fusion in space.

His plan is to build three rockets that, by 2027, will launch from Earth. One will carry a small nuclear fusion reactor. The three will then be manoeuvred in space and joined to make one giant spaceship.

Powered by nuclear fusion, this will be able to travel at a dizzying 500,000 miles an hour.

Richard walked out of school during GCSEs and went to work as an apprentice gunsmith. But all the time he was creating companies and inventing things.

He signed up for MiC to build a Twitter following and because the show’s producers would let him demonstrate some of his inventions, including a bracelet that would open your car door.

After leaving MiC he then set out to become a rocket scientist. Lugging an 18in lump of meteorite in his bag, he even secured an interview with Britain’s leading nuclear boffin Sir Steve Cowley, former head of the UK Atomic Energy Authority, to discuss his ideas.

Richard says: “I had to speak to the best brains and he is one of the best, and thankfully he didn’t say, ‘You’re not a scientist, go home Chelsea person’.”

Richard was also inspired by TV stargazer Professor Brian Cox, who he met at the 2013 wedding of Virgin tycoon Richard Branson’s son, Sam.

But Richard does not have even an A level in physics, so he hired tutor Dr James Lambert, who he then later took on as Pulsar Fusion’s chief engineer.

The firm has also recruited Nasa scientist Zaheer Ali, and rocket scientists from Virgin Galactic and the European Space Programme, and their work is checked by experts at Southampton University.

Richard has ruled out ever returning to reality TV. He says: “I seriously hope to have a reactor in space before I’m 40.”