How EastEnders hit all time lowest ever viewing figures 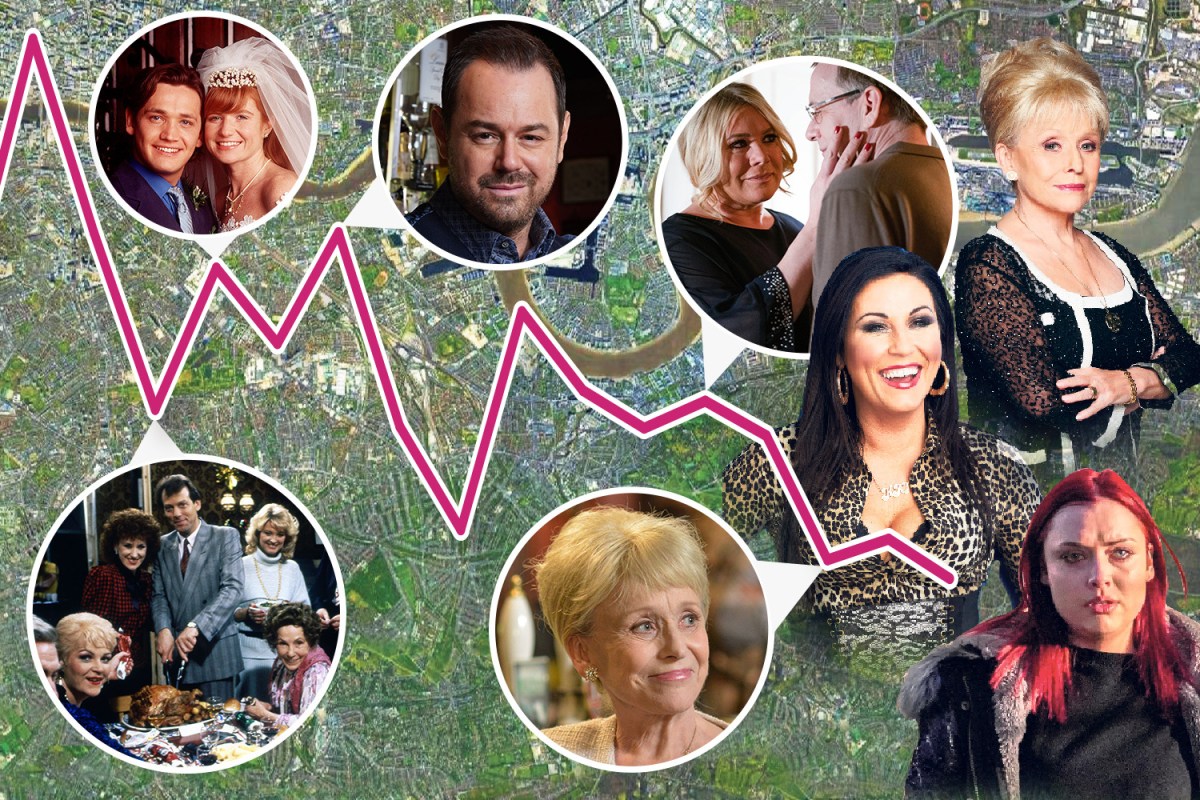 But the storylines have become so boring that the noisy beats are now more likely to wake up viewers who’ve dozed off.

The BBC1 soap is in crisis after drawing the lowest ever viewing figures in its history, scraping in with just 1.7 million viewers on July 31.

It’s a far cry from the 30million who tuned in to see “Dirty” Den hand divorce papers to Angie in the show’s mid-Eighties heyday.

Both ITV soaps consistently attract more than four million viewers — a figure that Eastenders bosses can now only dream of. So what has gone wrong in Albert Square?

A toxic mixture of irrelevant storylines, a dearth of real stars and a dour tone has sent viewers reaching for the off button.

In its heyday, Eastenders was a hit, thanks to stories that were relatable — think Peggy’s breast cancer or Dot putting Jim in a home — or heart-stoppingly exciting — like the mystery of who shot Phil Mitchell or Janine pushing Barry off a cliff.

When Den Watts told Angie on Christmas Day 1986 that he wanted a divorce, 30.1million viewers tuned in to watch the carnage.

But recent storylines have focused on trendy issues — cosmetic surgery addiction, cannabis oil treatments and online trolling, among others.

And the sheer volume of these bland storylines amounts to overkill, and can come across as preaching.

Icons such as Peggy Mitchell — played by the late Barbara Windsor — are long gone. Peggy was killed off three-and-a-half years before Barbara passed away last year and East-Enders has not come close to replacing her.

Kat Slater, played by Jessie Wallace, is clearly being groomed to take on that mantle in Albert Square and would make a great landlady, but nobody will eclipse Babs.

Corrie, on the other hand, has kept many of its veteran stars, like Bill Roache (Ken Barlow) and Barbara Knox (Rita Tanner).

Another thing Eastenders could learn from Corrie is the importance of comedy, which is part of the DNA on the Cobbles.

Whenever EastEnders does introduce a funny character, they soon have all the wit sapped out of them with depressing storylines. Take Shane Richie’s Alfie Moon.

The larger-than-life schemer was a joy when he arrived in Walford in 2002.

Fast forward a few years and he nearly kills the Slater family by setting their house alight, discovers he has a brain tumour and impregnates his wife Kat’s second cousin before fleeing the country. No lols in sight.

Viewers who have stuck with Eastenders have been presented with one of its most depressing years in its history — neatly coinciding with a global pandemic, when people have been crying out for some light relief.

Over the past 12 months nine characters have copped it — six off screen — even the Taylor family mutt Bronson was dispatched to doggy heaven.

The level of misery in Albert Square cannot be matched by rival soaps and nobody embodies the utter gloom better than character Whitney Dean.

The market trader, played by Shona McGarty, is only in her late 20s but here is her depressing CV — groomed as a child by paedophile stepdad, befriends pimp who uses her as a prostitute, suffers a miscarriage, has an affair with her father-in-law, jilted her fiancé — who hid his true sexuality — at the altar, jailed for killing her stepdad’s son who stalked her.

She finally landed the man of her dreams, Kush Kazemi, only for him to be thrown under a Tube train by Gray Atkins — the resident Walford murderer. Joyous.

Former Enders actor Cliff Parisi, who played Minty Peterson, summed it up, saying he’d sometimes found the show hard going and joking that he’d get “post-traumatic stress after watching it”.

Cliff added: “Life is tough in the East End. And people laugh. In tragedy there’s humour. The show’s lost its sense of humour. Some-times I just want to see Dot Cotton moaning that the price of biscuits has gone up 10p.

“We just want to see normal people on occasion, with normal problems.”

When the storylines aren’t filling you with gloom, you may notice that some seem familiar — Walford has been unnaturally plagued by car accidents over the years.

Since Eastenders’ inception in 1985, 21 characters have died in vehicle-related incidents, 11 of which appeared on screen.

The tired old storyline got a run-out twice in successive months this year when Kat was knocked down by Whitney (she really can’t catch a break) and Nancy Carter was the victim of a hit-and-run courtesy of her own half-sister Frankie Lewis.

No wonder the car lot always has a packed forecourt — nobody knows how to drive properly.

When the cast aren’t racing around in errant motors, they are not spending nearly as much time in the local boozer, which all soap fans know is essential for setting the tone.

The Queen Vic used to be the hub of Albert Square, the perfect environment for a brawl or a christening.

But thanks to the introduction of a new gay bar, resurrection of a nightclub, the cafe’s late-night opening, plus Ian Beale’s rest-aurant, the cast are stretched all over Walford, meaning the funeral parlour is busier than its boozer.

We just want to see normal people on occasion, with normal problems.

Given that Queen Vic landlord Mick Carter (played by Danny Dyer) is the show’s biggest hit with viewers, it’s a pity he can’t oversee a a series of knees-ups brimming with punters.

To be fair, the show’s writers are up against tougher competition than ever before with streaming services hoovering up young audiences.

In an effort to tap into a younger market, Eastenders attempted to foster a binge-watching culture, experimenting with making all of the episodes in a week available to watch on BBC iPlayer on Mondays, during the Euro 2020 football this summer.

According to the soap’s publicity team, they attracted high viewing numbers, sparking speculation this could soon become the norm.

But if they really want to create a buzz around the show again, the casting agents should start looking for stars whose characters are as big off screen as they are on.

During the Nineties and Noughties many of the show’s cast members were household names, as much for their personal lives and habit of falling out of nightclubs as they were for their acting prowess.

They mirrored the lives of the soap’s maturing audience, which only enhanced the show’s popularity.

But where are the Sid Owens? The Michael Greccos? The Patsy Palmers? The Dean Gaffneys?

Other than seeing cast members appear on Strictly Come Dancing, fans rarely see them living up to the fame that comes with starring in one of TV’s biggest shows.

Eastenders used to be a key part of our cultural landscape, but it’s fast becoming an irrelevance. It’s time to put the magic back into the Doof Doofs.

Who was James Rado and what was his cause of death?