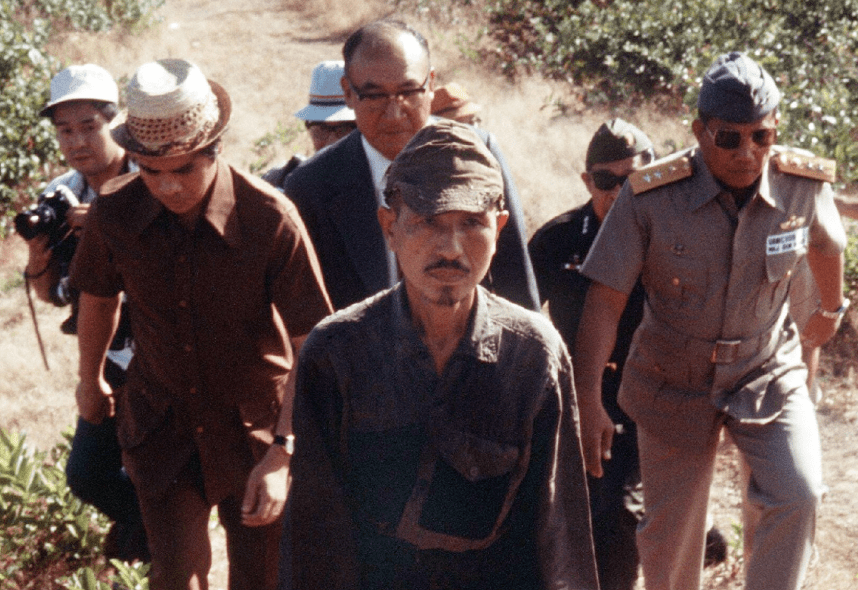 
HIROO Onoda’s commanding officer gave him one last order as the US closed in on Japan – “do not die”.

And the soldier took his duty so seriously, he refused to believe World War Two was over for three decades as he waged a one-man guerrilla campaign on an island in the Philippines.

As tomorrow is VJ Day – the anniversary of when Japan surrendered after the nuclear bombs were dropped on Hiroshima and Nagasaki – The Sun Online looks at this incredible story of belief, discipline and fortitude.

Second Lieutenant Onoda’s epic holdout began on Boxing Day 1944 when aged 22 he was deployed to Lubang Island in the Philippines.

The young intelligence officer of the Imperial Japanese Army was told under no circumstances should he surrender or take his own life – and he was to keep fighting until the bitter end.

Hiroo explained in 2010: “Every Japanese soldier was prepared for death, but as an intelligence officer I was ordered to conduct guerrilla warfare and not to die.

“I became an officer and I received an order. If I could not carry it out, I would feel shame.”

When US and Filipino forces stormed Lubang in February 1945, nearly all of the Japanese occupiers were killed or had surrendered.

But Onoda — a highly trained survival expert — led his few surviving comrades into the mountainous jungle in the island’s interior.

For the dutiful subject of Emperor Hirohito was faithfully carrying out the order to conduct a guerrilla warfare campaign against the invading forces.

And that is just what he did for nearly 30 years — unaware of his country’s  August 15, 1945 surrender after two atomic bombs were dropped by the US.

The die-hard soldier and a band of three other fellow stragglers were convinced that a surrender order document dropped from the skies by General Tomoyuki Yamashita of the 14th Army was fake.

Instead, they waged their own war, eating jungle fruit and stolen farm animals, while occasionally killing an “enemy soldier” they believed was disguised as a “farmer or policeman”.

Some 30 Filipino islanders were killed over their three-decade campaign.

The first of the four, Yuichi Akatsu, decided to surrender in 1950 after abandoning his comrades.

And then four years later Shōichi Shimada was shot dead by a search party looking for the men, while Kinshichi Kozuka died in 1972 after being shot by local police.

Onoda was then left as last man standing to carry on the fight.

He continued to dismiss search parties sporadically sent out to trace him as enemy ploys to dupe him into surrender.

Hiroo later said he believed leaflets dropped by his own country were American-written because they were filled with mistakes.

He even dismissed a Japanese flag that was planted in the jungle bearing signatures of his family.

I became an officer and I received an order. If I could not carry it out, I would feel shame

Also, with this was a tape-recording of his ageing mother, by now 86, was broadcast, pleading: “Please come home while I am alive.”

Finally he surrendered in 1974 after being found by a Japanese hippy traveller Norio Suzuki who said he was looking for “Lieutenant Onoda, a panda, and the Abominable Snowman, in that order”.

Suzuki won Hiroo’s trust but he refused to leave his jungle hideout unless his orders were rescinded.

So his commanding officer, by now a bookseller who retired from the army, was flown in to meet his old comrade and formally order him to stand down.

He fulfilled his promise from 30 years earlier that “whatever happen, we’ll come back for you”.

Hiroo gave up his sword, his still-functioning Arisaka rifle, 500 rounds of ammunition, several hand grenades and a dagger his mum had gifted to commit suicide with should he be captured.

Then, still wearing his decades-old army uniform, which he kept neatly pressed should any superior officer visit,  he walked out of the jungle.

Hiroo was pardoned by Filipino President Ferdinand Marcos for the 30 islanders he and his comrades killed.

Now aged 52 he was flown back to Japan — and to a hero’s welcome.

When asked at a press conference what he’d been doing he simply said: “Carrying out my orders”.

His commanding officer had told him in 1944, “It may take three years, it may take five, but whatever happens we’ll come back for you.”

Returning home he was horrified by the Japan of 1974 which was much different from the home he left, feeling traditional values had been eroded by consumerism.

After a temporary stint as a cattle rancher in Brazil he returned to a second career running a children’s nature camp outside Tokyo.

He was to live a further 39 years after emerging out of the jungle and surrendering, dying in Tokyo aged 91.