Harrowing moment dad yells ‘Noah’ after son, 6, is hit by doped up driver, 24, who mounted pavement at 60mph in 30 zone 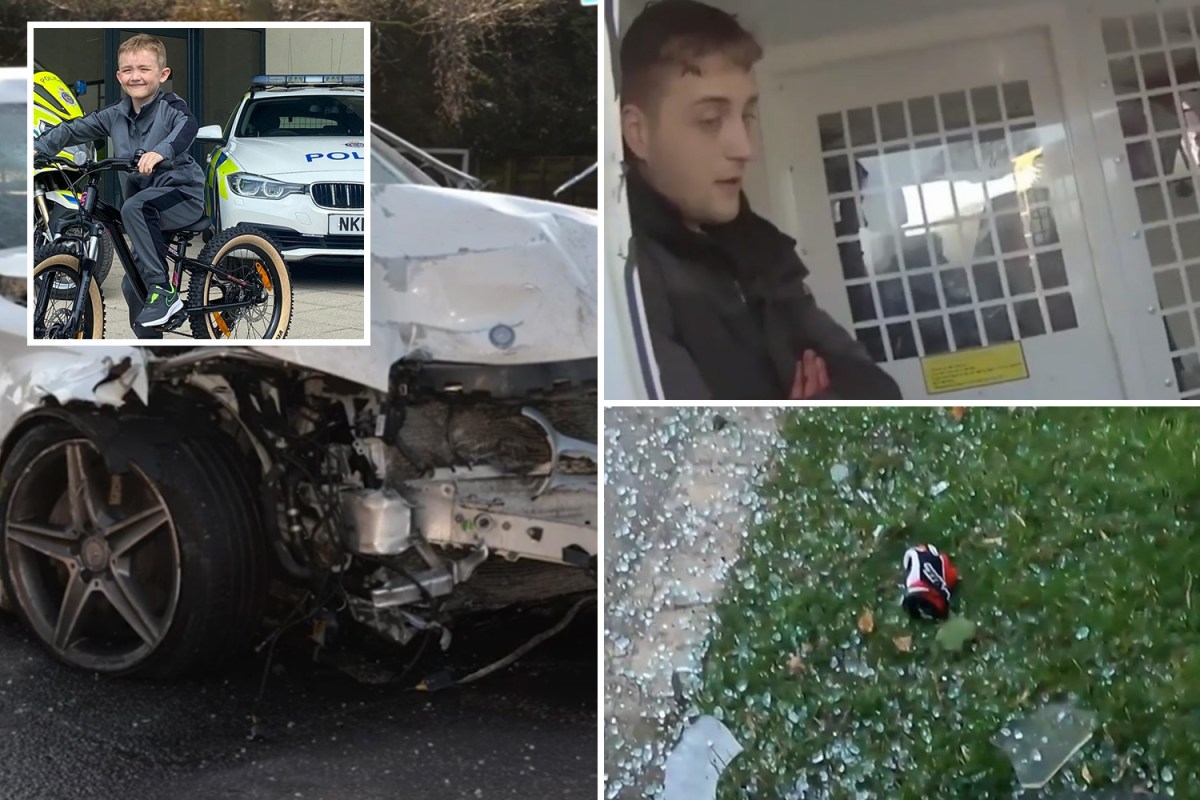 
THIS is the horrific moment a dad shouts for his son after the six-year-old was hit by a drugged-up driver who mounted a pavement at twice the speed limit.

Noah Herring can be heard screaming in pain in the distressing footage, shot on dad James’ helmet-mounted GoPro camera.

The youngster was mown down by a Mercedes driven by Harry Summersgill.

The 24-year-old was high on ketamine, cannabis and cocaine when he came off the road at 60mph in a 30mph limit, hitting the little one and a bus stop.

Chilling footage of the crash in Stockton, Co. Durham, has now been released by cops.

It shows James frantically scrolling through his phone as he tries to call emergency services while shouting: “Noah, Noah.”

As he looks up, the camera catches a scene of devastation, with shattered glass lining the road and one of Noah’s riding gloves lying beside his upturned bike.

James can be heard shouting “Noah, sit down, don’t move”, before his son begins groaning on the ground.

He then begs for an ambulance, telling the operator: “Please, ambulance, please – he’s in a lot of pain, he’s in a really bad way.

“A car’s crashed into us. Just stay with me, Noah.”

Throughout the upsetting video, Noah can be heard crying in agony.

The video then shows the moment Summersgill was arrested.

The driver, who sits in the back of a police van with his arms crossed, grinds his teeth together before nodding blearily.

Please, ambulance, please – he’s in a lot of pain, he’s in a bad way

A court later heard he “didn’t care if he was alive or dead” when he got behind the wheel.

Noah was left with a bleed on the brain, as well as fractures to his lower left leg and his collarbone.

But despite the horror he caused, Summersgill did nothing to help at the scene, simply turning his back on the schoolboy.

He later admitted still having cocaine in his nose at the time of the crash.

The vile driver, of Long Newton in Stockton, admitted causing serious injury by dangerous driving and was sentenced to three years in jail, as well as a six-and-a-half year driving ban.

MORON DRIVER HAD COKE IN HIS NOSE

Releasing the footage to support a national campaign on drug driving, Inspector Dave Williams of the Cleveland and Durham Specialist Operations Unit said: “Noah and James were out riding their bikes and having a pleasant morning when Harry Summersgill, knowingly under the influence of a cocktail of drugs, drove his car and struck Noah at high speed.

“Noah’s family know how lucky they were that day – the outcome could have been much worse and we’re all thankful that it wasn’t.

“To anyone who may get into their car with the intention of driving while under the influence, I would urge you to watch this footage and see the horrendous circumstances for yourself.

“No driver should ever take risks like these. It is unacceptable and we won’t tolerate anyone who takes drugs or drinks alcohol and gets behind the wheel of their vehicle.

“Our message is simple. Don’t do it.”