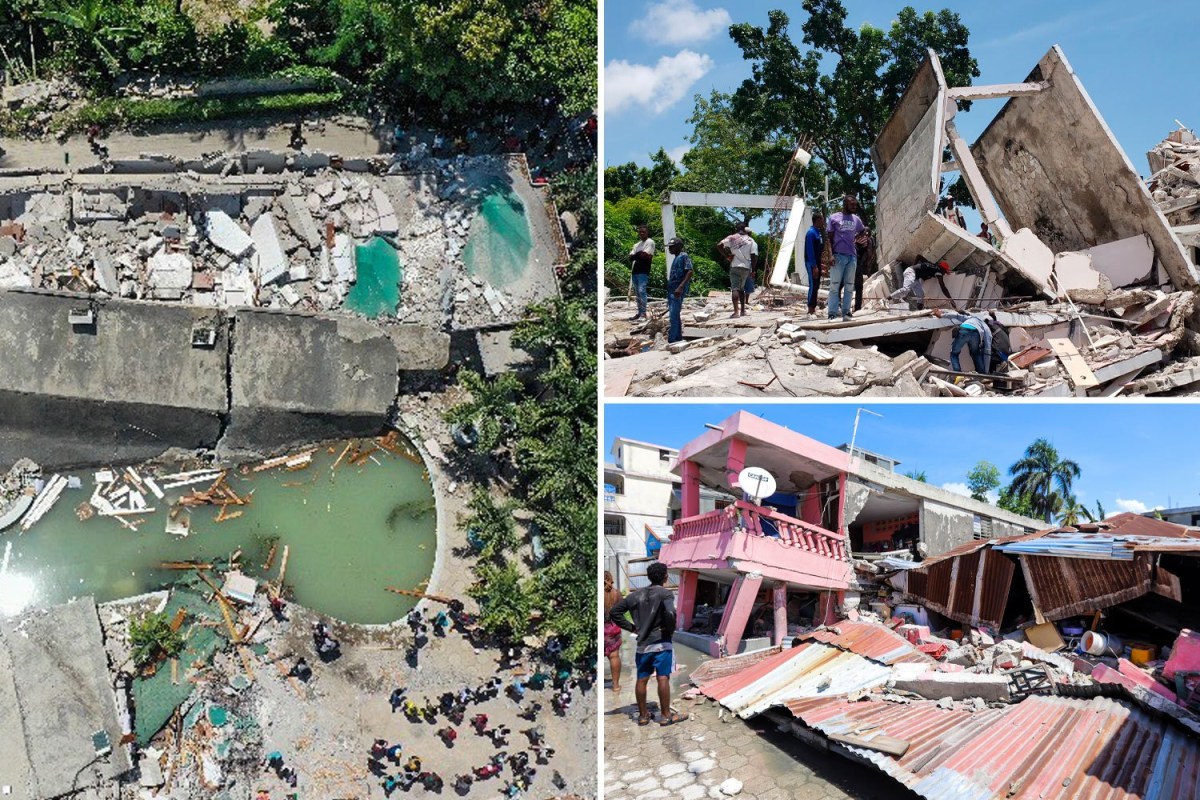 
AT least 227 people have been killed and many more are feared dead after a major earthquake struck western Haiti on Saturday, leveling homes and buildings to rubble.

The magnitude 7.2 earthquake struck 8 km from the town of Petit Trou de Nippes, about 150 km west of the capital Port-au-Prince, at a depth of 10 km, the US Geological Survey (USGS) said.

At least 227 people have died, according to a tweet from the Civil Protection Service.

“The death toll from the earthquake has risen to 227, including 158 in the South hundreds of wounded and missing,” it said.

“The first response, carried out by both professional rescuers and members of the public, made it possible to extract many people from the rubble. Hospitals continue to receive injuries.”

“High casualties are probable and the disaster is likely widespread,” a statement from the agency released around an hour after the quake said.

“Past events with this alert level have required a national or international level response.”

Jerry Chandler, Haiti’s director of civil protection, confirmed deaths had occurred but said he doesn’t “yet have an exact toll”, adding that officials are “still collecting information.”

Images posted to social media showed significant damage to buildings including collapsed homes and rubble splayed across the road.

French-language newspaper Le Nouvelliste reported on Saturday that “The majority of hotels and churches on the south coast of Haiti, which are often the most important buildings in cities, have collapsed or suffered significant damage.”

Economic losses could range in the tens of millions, USGS reports.

A church reportedly collapsed under the strain of the quake in the southwestern town of Les Anglais while a ceremony was apparently underway.

One clip uploaded to Twitter on Saturday afternoon showed a young girl and boy being hauled from the wreck of a collapsed building by a group of good Samaritans welding tools.

The children looked traumatized and fatigued, with the girl unable to stand on her own.

President Joe Biden has authorized an immediate US response to the earthquake on Saturday afternoon and named US AID Administrator Samantha Power as coordinator of the effort.

He confirmed the motion in a tweet, writing: “We will make the necessary arrangements to assist people affected by the earthquake in the Southern Peninsula.

“We must show a lot of solidarity with regard to the emergency. The government will declare a state of emergency. We will act quickly.”

Henry also said the ″violent quake″ had caused loss of life and damage in various parts of the country, and also appealed to Haitians to unify as they ″confront this dramatic situation in which we’re living right now.”

His state of emergency declaration will be in place for at least the next month.

At a press conference, he said he would not ask for international help until the extent of the damages is known.

Biden later said in a statement: “In what is already a challenging time for the people of Haiti, I am saddened by the devastating earthquake that occurred in Saint-Louis du Sud, Haiti this morning.

“We send our deepest condolences to all those who lost a loved one or saw their homes and businesses destroyed. I have authorized an immediate US response and named USAID Administrator Samantha Power as the senior US official to coordinate this effort.

“Through USAID, we are supporting efforts to assess the damage and assist efforts to recover those who were injured and those who must now rebuild.

“The United States remains a close and enduring friend to the people of Haiti, and we will be there in the aftermath of this tragedy.”

Haiti is still recovering from a magnitude 7 earthquake from 11 years ago that struck closer to the capital and killed at least 250,000 people, injured 300,000, and displaced more than 1.5 million.

“Everyone is really afraid. It’s been years since such a big earthquake,” Daniel Ross, a resident in the eastern Cuban city of Guantanamo, told Reuters, adding that his home stood firm but the furniture shook.

Naomi Verneus, a 34-year-old resident of Port-au-Prince, told the AP she was jolted awake by the earthquake and that her bed was shaking.

“I woke up and didn’t have time to put my shoes on. We lived the 2010 earthquake and all I could do was run,” she said.

“I later remembered my two kids and my mother were still inside. My neighbor went in and told them to get out. We ran to the street.”

A video posted to social media depicted a chaotic and frightening scene in Les Cayes, where a building had collapsed onto a street and panic-stricken residents are heard crying out in the background.

The earthquake was also felt across the Caribbean, including in Jamaica and Cuba.

#NEW: Images reveal mass destruction following the 7.2 earthquake in #Haiti. Similar in strength to the catastrophic earthquake that killed more than 160,000 people in the Caribbean country in 2010, according to a study. pic.twitter.com/1RYFlv31af

The US Tsunami Warning System said “hazardous tsunami waves are forecast” with waves reaching one to three meters above the tide level possible along the coast of Haiti. The warning was lifted just over an hour later.

A series of smaller aftershocks continued to shake the island after the original quake, USGS reported.

One registering a magnitude of 5.2 occurred 17 km (10 miles) from Chantal earlier this morning.

Haiti is one of the poorest nations in the world, with 60 percent of its population living below the poverty line.

The disaster-stricken nation is still reeling from the assassination of its president, Jovenel Moïse, on July 7.

Haiti is still also still feeling the effects of the devastating earthquake that decimated the nation in January 2010.

To make matters worse, the region may be impacted by Tropical Storm Grace early next week.

Formerly a tropical depression, Grace strengthened to tropical storm status about 400 miles east of the Leeward Islands in the Atlantic Ocean, according to the National Hurricane Center.

The storm is expected to bring heavy rain and flooding and could hit Haiti as soon as Monday, forecasts show.

“We’re concerned that this earthquake is just one more crisis on top of what the country is already facing – including the worsening political stalemate after the president’s assassination, COVID and food insecurity,” said Jean-Wickens Merone, spokesman for World Vision Haiti.

Earlier Saturday, a 6.9 earthquake hit the southeast of Alaska. So far no injuries have been reported.

For the latest news on this story keep checking back at Sun Online.

The Sun is your go to destination for the best celebrity news, football news, real-life stories, jaw-dropping pictures and must-see video.