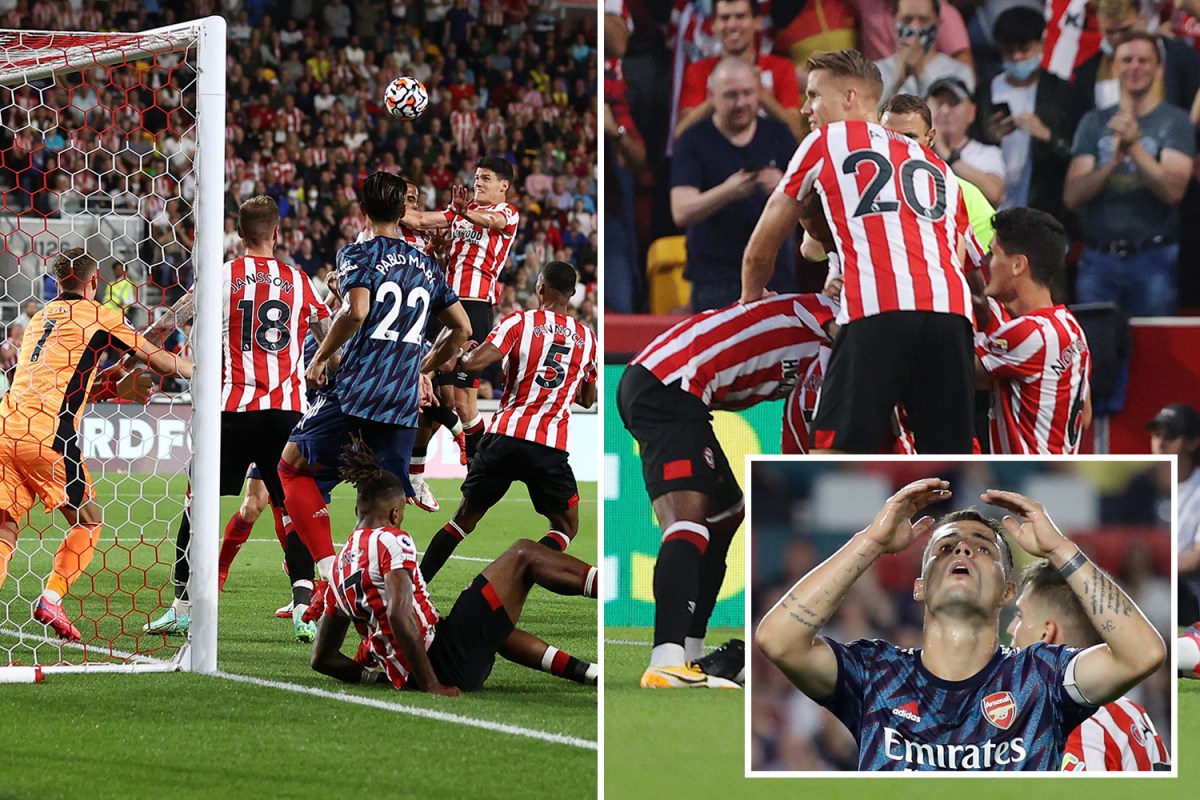 
MIKEL ARTETA won’t be getting sacked in the morning as the gloating Brentford fans predicted.

But the Arsenal boss is treading on increasingly thin ice after a disastrous start to this make-or-break season.

And the bad news for the shell-shocked Spaniard is that things could be about to get a  whole lot worse.

Because if he thought that losing to a Brentford team making their first top-flight appearance since 1947 was as bad as it could get, he ain’t seen nothing yet.

For with Chelsea and Manchester City next up for the gormless Gunners, there is every chance that they could go into next month’s international break bottom of the Premier League.

And that really would be testing the patience of the club’s absent owners as they face up to yet another year of mediocrity.

Stan Kroenke is determined to give Arteta every possible chance to turn things around but you do wonder just how much more of this he can take.

Not that Arsenal’s shortcomings should take anything away from newly promoted Brentford as they sit proudly at the top of the table.

OK, so they are the only team to have any points on the board until this afternoon, but that still won’t take the gloss off this dream start to life in the big time for Thomas Frank’s team.

Goals from Sergi Canos and Christian Norgaard were more than enough to secure the points as Brentford lived up to Frank’s bold promise that they would not die wondering.

The new season was only seven minutes old before Bernd Leno and Pablo Mari were at each other’s throats after they were closed down trying to play out from the back.

The Spanish centre-back was struggling to cope with Brentford’s relentless pressing game and was caught out again by Ivan Toney’s first-time ball over the top.

Fortunately for Arsenal, Bryan Mbuema’s powerful rising shot struck the outside of the near post and flew behind for a goal-kick.

The Gunners might have added £50million Ben White to their defence but they still look like an accident waiting to happen every time the ball comes near their penalty area.

And White must already be wondering just what he has let himself in for after getting the run-around from his former Peterborough team-mate Toney.

Arteta was a picture of misery as he watched his players repeating all the basic errors which cost them so dearly last season.

And his worst fears were confirmed when they fell behind to a 22nd minute goal all of their own making.

Toney’s flick allowed wing-back Kieran Henry to deliver a cross which Vitaly Janet was only  able to head against White.

But in his desperation to prevent the ball going out for a corner, Calum Chambers cleared straight to the lurking Canos.

It looked for all the world as though the ball had already gone out of play, but Canos was not complaining as he drilled a low shot through Chambers’ legs and inside Leno’s near post.

The little Spaniard was one of only two Brentford players with any previous Premier League experience, even if it was just nine minutes of action for Liverpool back in 2016.

So he probably never dared dream that he would become the man to score his club’s first top flight goal since football was played in black and white.

But if it was a moment to remember for this new stadium’s first capacity crowd, it was yet another one for the long-suffering Arsenal fans to forget.

They had feared the worst as soon as it emerged that star strikers Pierre-Emerick Aubameyang and Alex Lacazette were going to be ruled out by a mystery illness.

That left Arteta with little option other than to hand a Premier League debut to Folarin Balogun alongside fellow rookie Gabriel Martinelli up front.

With Thomas Partey, Gabriel and Eddie Nketiah also ruled out by injury and Bukayo Saka not yet ready to start, it was quite possibly the youngest team Arsenal had ever fielded in the Premier League.

They briefly rallied after the break, with Emile Smith Rowe, Kieran Tierney and Gabriel Martinelli all going close to cancelling out Canos’ strike.

But just when it looked as though Brentford might struggle to cling on, they were gifted another goal by the suicidal visitors.

Mads Bech’s 74th minute throw into the six-yard box should have been dealt with by Mari, but when he missed his header the ball bounced right over White to leave Norgaard free to nod in from two yards out.

Arteta was so busy arguing with fourth official Mike Dean at the time that he didn’t even notice his team shooting themselves in the foot yet again.

It was probably just as well. He has already seen more than enough to know how much of a job he has on his hands.