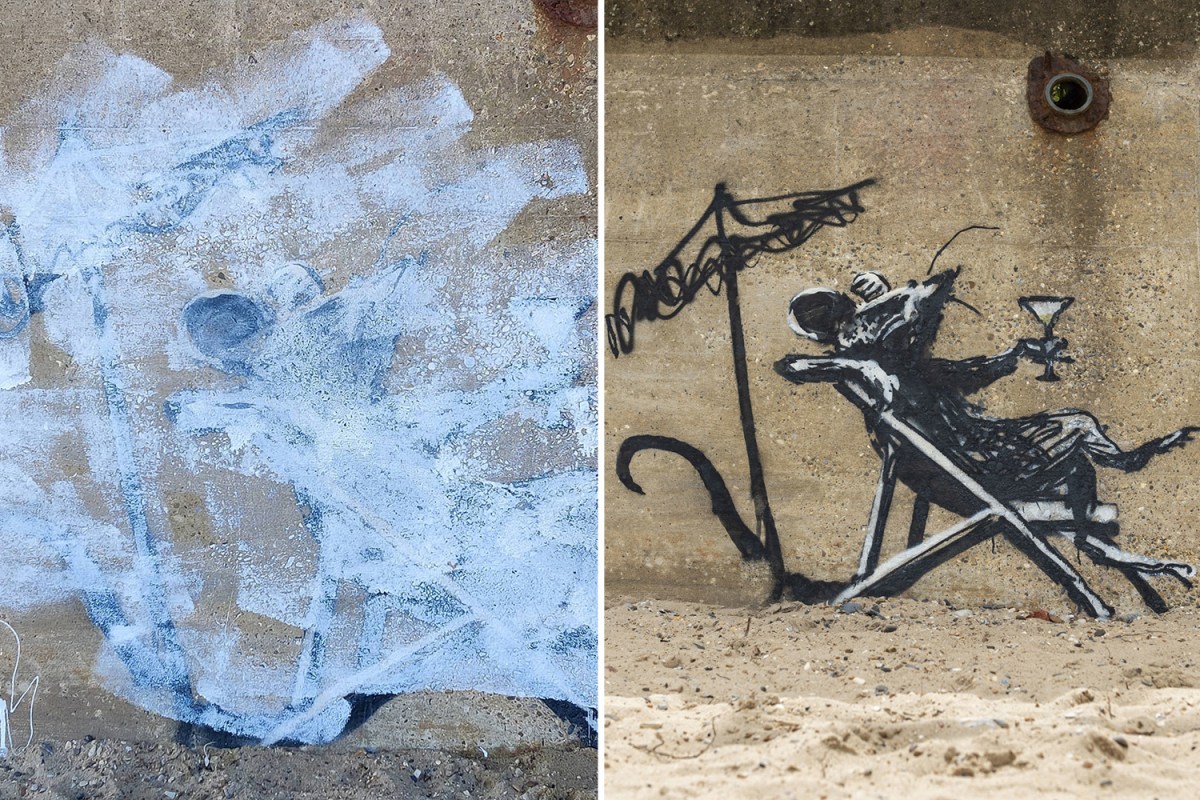 
A BANKSY artwork has been defaced, with vandals painting over the elusive artist’s new piece of a rat sitting on a deckchair.

Residents in the seaside town of Lowestoft are furious after the painting, which was part of Banksy’s ‘Great British Spraycation’ was destroyed.

The artist famed for his street art recently paid a visit to the area, as part of a new series of paintings he dubbed ‘The Great British Staycation’.

He confirmed his work in an Instagram video showing him travel to each location in a campervan armed with a cool box filled with spray paint.

Crowds have flocked to see the murals that seem to have been inspired by Brits opting to holiday at home this year.

But residents in the Suffolk town awoke on Sunday to the news that the new attraction had been daubed with white paint.

“We went for a walk down at the beach yesterday evening, walking the dog around 6.30pm and it was still intact.

“The vandalism must have happened some time between then and midnight when it went up on social media.

“It just looks like it has been daubed over with roller paint and paint was still dripping down the piece.

“We decided to come and look this morning and there are already people down there trying to get rid of the paint so the community spirit is strong in Lowestoft.”

In a statement, East Suffolk Council said: “We are naturally appalled that someone has chosen to behave in such a selfish and mindless way given how excited we all are by the appearance of these works here on the east coast.

“We are, however, hopeful that this particular work can be restored, and are engaging with specialists.”

The council said that prior to the rat art being confirmed as a genuine Banksy it had placed an order for protective materials to safeguard the piece.

It added: “In the interim, we have also employed security patrols to visit each site and on this occasion, our patrols actually interrupted the individual defacing this work and prevented any further damage occurring.

“We are very grateful for the huge goodwill of local people who are proud of these artworks, but we would kindly ask people not to try and repair the works themselves and to please leave this to professional restorers.”

The Spraycation series has been applauded by locals, with some suspecting it could have been Banky’s way of helping the areas secure their City of Culture bids.

The councils of the Great Yarmouth borough and East Suffolk submitted a joint proposal in July to become the 2025 UK City of Culture.

Banksy confirms he was behind streetwork in Suffolk and Norfolk