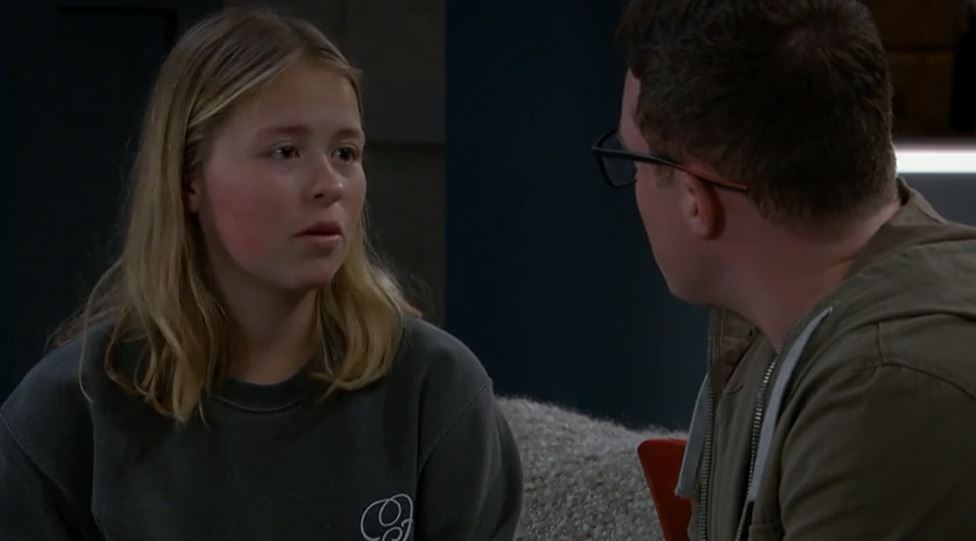 
EMMERDALE fans were left in tears over Vinny Dingle’s declaration of love to his ex Liv Flaherty tonight.

Mandy blocked alcoholic Liv’s number on Vinny Dingle’s phone earlier this week in an attempt to stop them getting back together.

She cruelly told Liv that her asexuality meant she and Vinny could never work – and that he’d moved on with Belle Dingle.

Fans were devastated as the alcoholic hit rock bottom last night after almost choking on her own vomit in the cemetery.

Tonight’s episode saw Vinny call round to check on Liv and apologise for Mandy’s harsh words.

Liv also apologised for the last few months and told Vinny she was seeking professional help.

Vinny was understanding when she confessed to trying to sleep with Jacob.

“After what mum said to you, it’s no wonder you were in a dark place. She made you feel as though there’s something wrong with you. There isn’t. You’re perfect,” he told her.

“I don’t expect to be perfect. I just don’t want to be in this mess anymore,” she said.

Liv realised she’d overstepped the mark when Vinny looked startled, and told him to forget what she’d just said.

Vinny ran off but turned up later in the episode with a bunch of flowers.

“Us getting back together you kind of sprung it on me. I wasn’t ready. I just need to get my head around things,” he explained.

“The truth is, I’m scared. What if you do start drinking again?” He continued.

“Whenever you’re away from me, you’re all I think about.

“So what is the point in walking away when you’re always going to be in here.

“What if I hurt you, or I let you down again. If things get too much, you’ve got to say,” Liv cried.

“Okay but we’re both fighting. And we’ll fight as hard as we can,” Vinny told her.

Emmerdale fans were left in tears at the emotional scenes.

One said: “Omg Vinny with the flowers. Vinny and Liv are too cute.”

A third penned: “I’m equal parts happy and nervous that Liv and Vinny are back together. I think they are a lovely couple but like Liv says, there are lots of uncertainty’s. I don’t want them to end up ruined!”