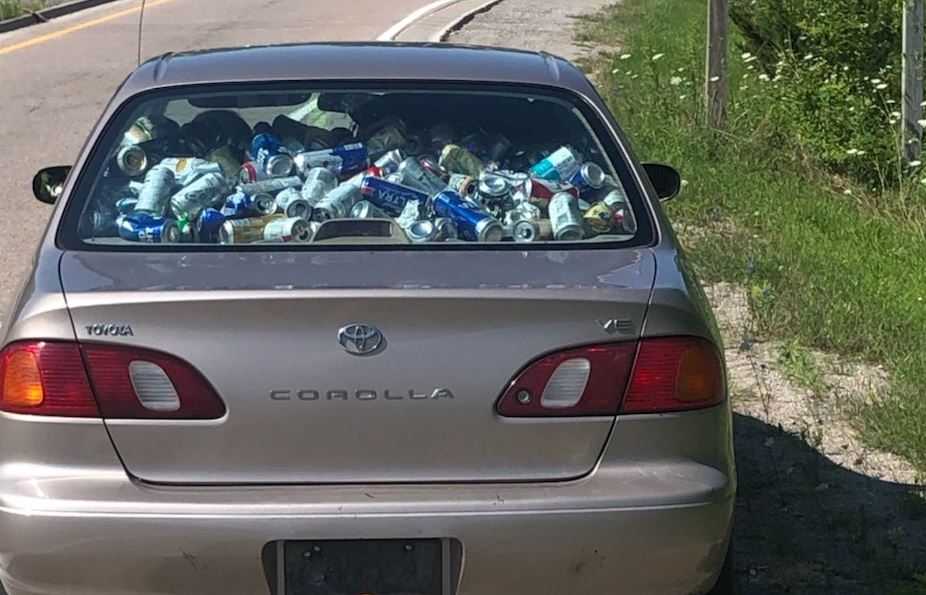 
A DRIVER whose car was filled to the brim with beer cans told cops that they were going to be RECYCLED.

The Toyota car was pulled over by officers during a routine drink driving check in a small town in Ontario, Canada, last week.

The car was pulled over as part of the RIDE check program which is where officers explicitly look for signs that someone has been drinking before getting into their car.

It was then that officers noticed the overloaded backseat.

Hundreds of empty beer cans were stacked almost to the roof of the inside of the car.

The driver was charged with having an insecure load and with driving while under suspicion, police said.

The penalty for driving with an “insecure load” is £74 but the latter charge can come with a minimum fine of £576 and up to six months in jail.

Posting a picture of the vehicle to Twitter, Ontario Provisional Police wrote: “Recycling is good, but driving with an insecure load is dangerous.”

Police said that the load was secured before departure and that there was another passenger in the vehicle.

Officers urged other drivers to stay safe and to secure their load before hitting the road.

The pictures sparked outrage online with plenty of people disgusted by the number of empty cans.

“Wow, the smell from all those empties should have been enough for them to blow over 0.08,” one said.

“What the heck is wrong with people… geesh!”

Another said: “Just when you think you’ve seen it all….”

“The stench!” wrote another.

Driver calls 911 on himself and tells police he’s ‘too drunk’ in Florida, US