Don’t worry if you fail A Levels, we all peak at different ages 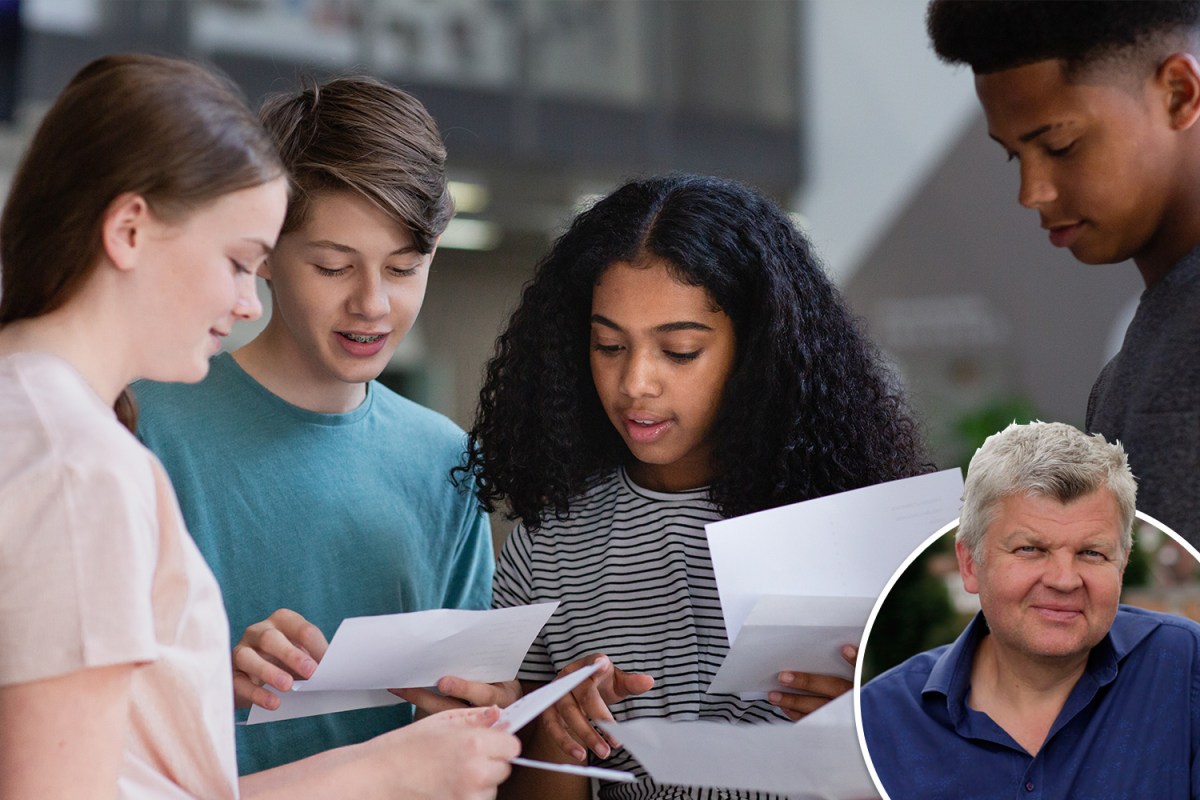 
THIS is an unusual A-level results day, with grades awarded based on the assessment of the students’ own teachers, rather than external examiners.

I feel rather sorry for all concerned.

Those who do really well will for ever have to deal with exchanges like this:

“What A-level grades did you get?”

“Brilliant! What year was that then?”

And imagine being a kid who hasn’t done very well today.

In the news the story will likely be about unusually high grades achieved across the board.

How humiliating for the students whose grades are poor to have to listen to all of that.

Then there are the teachers.

In normal times, students who felt they’d been unfairly graded could only rail against faceless examiners. Not this year.

They and, more likely, their parents will have specific teachers and schools to be furious with.

My strongest advice to teachers everywhere is to go into hiding for at least two weeks, to give the first waves of fury about A level and GCSE grades a chance to pass.

As ever, the less privileged will get a raw deal.

The most involved parents — call them caring or call them pushy, it’s your choice — will already have exerted their influence on teachers, especially if they’ve shelled out eye-watering sums to private schools.

Imagine being a teacher in an expensive school today, waiting for the screech of Bentley tyres outside as the first and most furious parents turn up to register their dissatisfaction.

Yes, it’s going to be interesting, but the speech I give every year at exam results time remains the same.

These results are important, but not the be all and end all.

Lives don’t need to be defined by them.

They’re not the end of something, but the beginning.

It’s like waiting for a baby to be born.

You think that when it comes, all your problems will be over when in fact, in the nicest possible way, they’re only just beginning.

ALL TO PLAY FOR

It’s still all to play for.

At the end of the day, A-level grades are merely a measure of how clever you happened to be in your mid to late teens.

Many factors will have been in play here.

Your school and your home life will have been important and that will have fed into how much time and effort you’ve put into your schoolwork.

Or perhaps you’ve done next to no work yet still, annoyingly for the rest of us, ace everything.

In that case you will doubtless have concluded that you’re just naturally brilliant and the rest of your life will be as much of a breeze as your school days.

I’ve got news for you — it doesn’t work like that. I believe we all peak at different ages.

My peak was at the age of eight, when I was the cleverest, most desirable to girls and, to cap it all, captain of the football team. I was the boss.

After every playtime, breathing heavily from another brilliant football performance and having been relentlessly pursued in kiss chase, I’d return to class and have most of the answers to everything.

Those were the days.

I assumed they would last for ever. They didn’t.

It was all downhill from there.

By the time I was 18 I could barely get in the football team, girls had apparently lost all interest in me and I wasn’t even that clever any more.

Even though I did loads of work, the only decent grade I got was an A in English.

Otherwise, it was a C in history, and an effing fail in religious education.

I also got a B in general studies which, possibly as a result of a clerical error, the University of London accepted as counting towards my offer.

It’s 36 years since I went to my school to read those results, posted up on a window for all to see.

I can remember the sight, smell and feel of it like it was yesterday.

I was with two friends, Ed and Martyn. Ed got his grades and went on to become a doctor.

Martyn, however, to our horror almost as much as his, messed his up. His dream of studying dentistry was in tatters.

We walked him home not having the faintest idea what to say to him.

What I would have said, if I’d only known, was that his academic peak was still to come.

He retook his A levels, did well, went off to university and is now a professor at Guy’s Hospital in London and eminent in his field.

So let’s congratulate those who’ve done well today, but remind them there’s still an awful lot of work to do

And put an arm around the shoulder of those who haven’t done so well, to tell them they’re only at life’s real starting line

There’s a long race yet to be run and an awful lot more chances to shine.

Sport at its best

THE build-up to an Olympics is always a great time for miseries, never more so than for this summer’s in Tokyo.

Why are we bothering? What’s the point?

The whole thing is an expensive disgrace, and no one could care less anyway.

But then it starts, and the miseries start getting picked off, one by one, as this event or that draws us all in.

Team GB doing so well is a great help, of course.

Time after time, heroes we’d never heard of, in sports we don’t understand, or in some cases didn’t even know existed, really began to matter to us.

The Olympic “movement”, as we often hear it referred to, is more like a business, and a big one at that.

The irony is that, relentlessly corporate as it is, with its megabrand sponsors and expensive broadcast rights, at its heart is something simple, sincere and innocent – sporting endeavour undertaken for the mere joy and passion of it.

In terms of the athletes’ motivation, money doesn’t really come into it.

And that’s a rare thing indeed elsewhere in the world of sport.

NO matter who you are, player or fan, football will always find a way of breaking your heart in the end.

Just consider the sight of Lionel Messi sobbing like a baby at that press conference announcing his time at Barcelona was up.

You’d need ice in your veins not to feel sorry for the lad.

He looked like a little boy who’d accidentally kicked his favourite ball into the road and seen it squashed by a lorry.

It is surely some comfort to him that he could go home and carry on crying into the loving lap of his wife Antonela Roccuzzo, a woman so beautiful that Helen Of Troy would avoid walking into a party next to her.

Let it all out Lionel, would be my advice.

KIT HARINGTON, of Game Of Thrones finds it demeaning to be referred to as “incredibly sexy, or a hunk or anything”.

I understand where he’s coming from.

It must be awful to deal with the implication that you’ve only got to where you’ve got to because of your looks.

I would suggest to him that it’s no less awful to hear it said that you’ve got to where you’ve got to despite your looks, rather than because of them.

Writing in this very newspaper, Jeremy Clarkson once remarked, not unkindly, how I’d carved out a career in television despite having a funny, squished-up face.

I believe those were his exact words.

Was I bothered? Not really.

Whenever I read stuff like that I’d recall one of the first fan letters I ever had, written in the wibbly-wobbly hand of an old lady from South Shields.

“I want to rip all your clothes off, you big teddy bear,” she wrote.

Was I demeaned? Nah, not at all.

I love a bear

THE Sun on Sunday told how one in three men in London sleep with a teddy bear.

I’m one of them. He’s called Gerald. If my partner is away, Gerald takes her place.

He was a gift to me from my daughter, who got sick of me borrowing her soft toy – who goes by the name of Bonnie – to cuddle up to.

The first time I embraced Bonnie in bed the effect on me was profound.

I was transported back to my cot and able to access long-lost feelings of comfort and security.

This is surely hard-wired in us all.

To the two thirds of men who aren’t sleeping with teddy I say this: You don’t know what you’re missing.