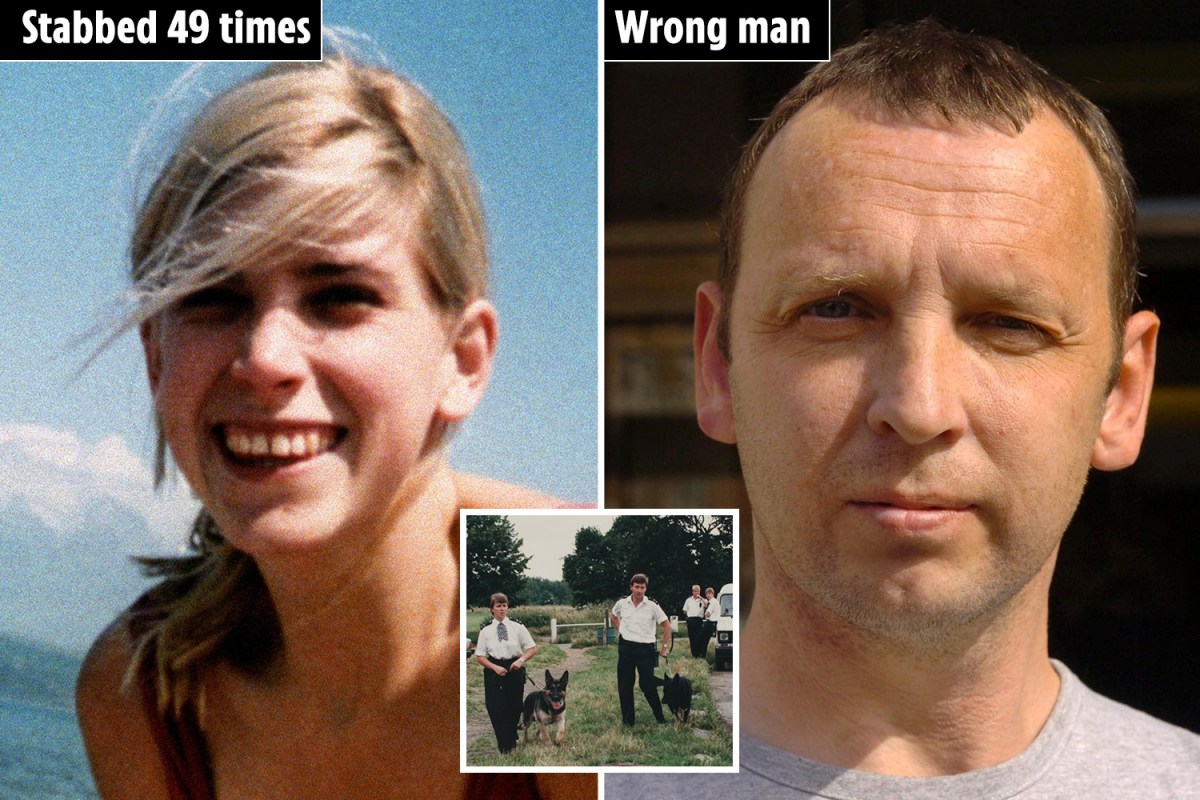 
FOR seven months, undercover police officer ‘Lizzie James’ had been seducing a man believed to be behind the brutal killing of a young mum.

After Rachel Nickell, 23, was stabbed 49 times and sexually assaulted in front of her two-year-old son, Alex, on Wimbledon Common in 1992, police had just one suspect.

Loner Colin Stagg – who was eventually cleared of all wrongdoing – was targeted by an officer, known only as ‘Lizzie James’, in the hope of eliciting a confession.

After months of saucy letters, phone calls and the promise of a relationship, police had nothing resembling an admission – so to try to make him feel more comfortable Lizzie detailed a fictional savage crime to coax him into confessing.

She claimed to have had the best sex of her life after taking part in a satanic ritual where the throat of a mother and her baby had been slit.

Stagg was repulsed by the story but she gave him an ultimatum – confess to killing Rachel or she would stop talking to him.

The man, who the officers believed had an “extreme sexual personality” and was a Satan worshipper, flatly said: “I’m terribly sorry but I haven’t.”

Despite his protests, Stagg was charged due to fitting a sketch of the killer and having been at Wimbledon Common on the day of the murder.

In 1994, the case was thrown out of court and 14 years later Robert Napper, a serial rapist and murderer, was finally unmasked as the real killer.

The honey trap operation, known as Operation Edzell, has been dramatised in the four-part Channel 4 show Deceit, starting tonight. We review the twists and turns of the case.

Toddler pleaded, ‘Get up mummy!’

The mutilated corpse of Rachel Nickell was discovered under a tree in Wimbledon Common, London, on 15 July 1992.

The 23-year-old model had taken her son Alex, then two, and their labrador for a walk and was found 200 yards away from her car one hour later.

When Rachel’s body was discovered, the toddler clung to her and repeated the heartbreaking words: “Get up mummy!”

There was widespread panic because the victim was a young mother with her child, during daylight hours in a popular park.

Detective Superintendent John Bassett was put in charge of the case and conducted the biggest manhunt London had witnessed in years.

The police were under pressure to catch their killer – and after ruling out 548 suspects and arresting 32 men, there was one man they believed had done it.

Stagg, who was in his late twenties, matched a facial composite that was circulated on Crimewatch and he lived in nearby Roehampton.

Stagg also regularly walked his dog on Wimbledon Common and had a sibling who had been jailed for the rape of a 19-year-old girl.

When interviewed by police over a three day period in September 1992, he denied all wrongdoing but officers remained suspicious.

After raiding his home, they found a black sheath knife, black leather studded belt, a pair of black gloves and his bedroom was painted black.

They also found a pentagram – a symbol often linked with devil worship – along with two rows of stones in a circle and several books of cults and the occult.

By December, a woman who thought she recognised Stagg from the Crimewatch appeal told police she used to write love letters him after an appeal in a Lonely Hearts column.

She corresponded with him for more than a year before breaking things off when the messages allegedly turned “sexually explicit”.

Police consulted Paul Britton, a forensic psychologist who believed Rachel’s killer would have attacked women as a way to exercise sexual control.

With little evidence against Stagg, the police devised a plan to send a woman undercover to charm and convince him to admit to the murders.

It was believed a blonde 30-year-old officer – referred to as ‘Lizzie James’ – would be undercover for between two weeks and four months.

But seven months into the operation, they were yet to find anything damning.

Lizzie pretended to be a friend of the woman Stagg wrote “obscene” and “sexually explicit” letters to – and said she found his sexual desires interesting.

I sometimes long for company, the company that only a man can give

Stagg was suspicious because he believed police were trying to “fit him up” for Rachel’s murder but decided to respond.

In the letter, he claimed to do a lot of naked sunbathing at Wimbledon Common in secluded spots.

Lizzie tried to encourage more of a sexual tone to their letters, saying: “I’ve not had a relationship with a man for a long time.

“I sometimes long for company, the company that only a man can give.”

Stagg admitted to never having a sex life but went on to detail a fantasy of them hooking up in a garden and that he had an open mind.

After receiving a Valentine’s Day card from Lizzie, he wrote about the two of them having intercourse and told her more of his fantasies.

By April, after writing to each other for several months, Stagg wasn’t matching the profile described by Britton.

Lizzie, who was under increasing pressure, tried to get more out of the suspect by talking to him on the phone.

The following month they met for a picnic in Hyde Park, where she continued to make him believe she liked unusual sexual practices.

It was there that Lizzie claimed to have been involved in a satanic ritual killing, but Stagg – who was a pagan – thought it was repugnant as all human and animal life was sacred.

If only you had killed her, it would be all right

In a recording that was eventually released by the police, the suspect was shocked after being told that his ‘love interest’ enjoyed hurting people.

Stagg told her: “If I have disappointed you, please don’t dump me. Nothing like this has happened to me before.”

Lizzie told the suspect that she could only date someone who had experienced similar things to her, which led Stagg to invent committing a murder in the New Forest.

In his bid to woo her, he tried to take Lizzie to where Rachel was killed – only he went to the wrong location and said she had been raped when she had not.

In July, Lizzie delivered a final ultimatum – confess to killing Rachel or she would end their ‘relationship’.

‘Deceptive conduct of the grossest kind’

Despite being described as “obsessed” with the undercover cop, Stagg maintained his innocence and told her he didn’t do it.

A month later, Stagg was arrested and taken to court but by September 1994, his case was thrown out due to limited evidence against him and the case was dropped.

Justice Ognall ruled that “excessive zeal” had been used to incriminate the suspect and branded police efforts “deceptive conduct of the grossest kind”.

I truly don’t feel bitter towards the police anymore

In 2008, Stagg was awarded a then-record sum of £706,000 compensation by the Home Office, which he later compared to “like winning the lottery”.

This year, it was reported that the wronged man was working at Tesco on the tills and in the warehouse.

He said: “I truly don’t feel bitter towards the police anymore.

“I recognise now Lizzie and [Det Insp Keith] Pedder [who led the investigation] were only doing their job. I just happened to be in the wrong place at the time.”

Rachel’s murderer was finally named as Robert Napper and in 2008, he pleaded guilty to the killing in court.

Napper was a triple killer and serial rapist suspected of 70 rapes and sexual assaults over a four-year period over the Nineties.

He had been in Broadmoor psychiatric hospital since 1995 after a judge incarcerated him indefinitely for his crimes – which included killing Samantha Bisset, 27, and her four-year-old daughter Jazmine.

He was arrested after a fingerprint linked him to the Bisset killings and 16 years after Rachel Nickell’s murder was finally recognised as the killer.

During his court case at the Old Bailey, Mr Justice Griffiths told Napper: “You are on any view a very dangerous man.”

As for ‘Lizzie James’, there is a lifelong anonymity order that prevents her true identity from being revealed.

Deceit is a four-part drama that starts at 9pm, Friday 13th August, on Channel 4.

Deceit – Trailer for the Channel 4 drama