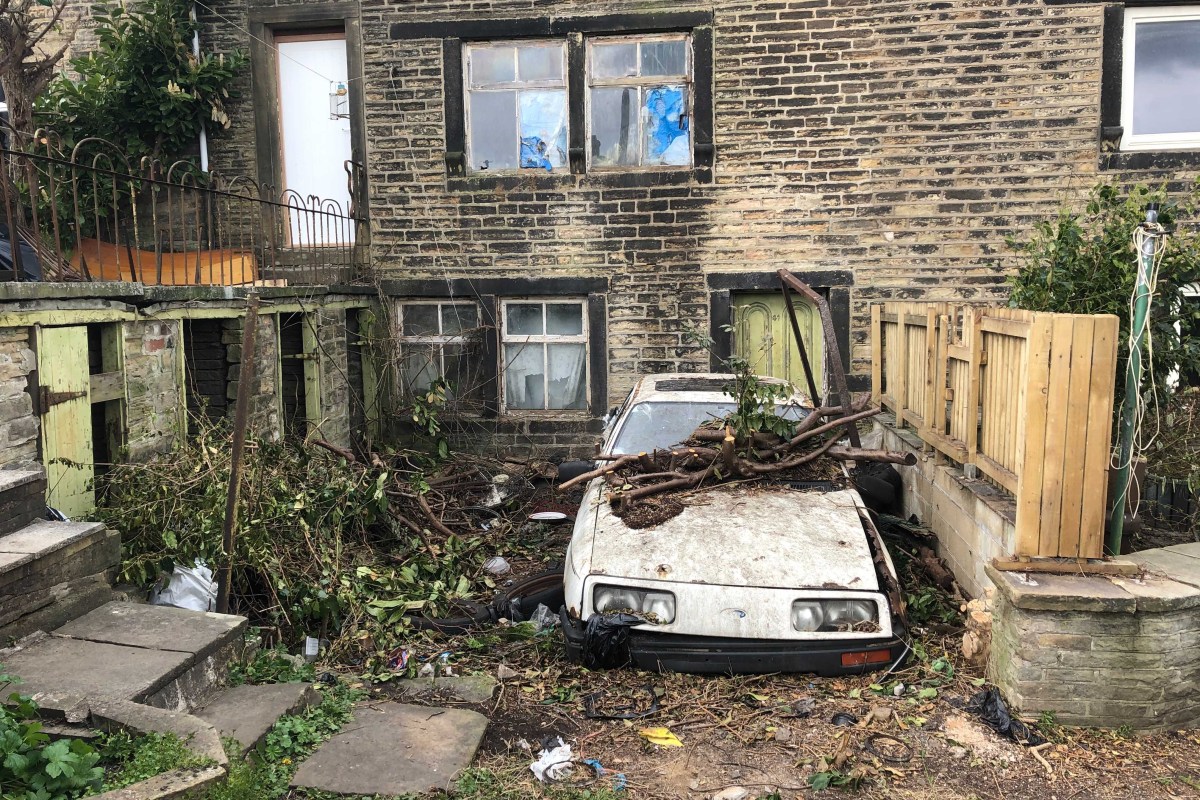 
A DAD’S ‘mummified’ body was found next to a sofa after a neighbour spotted a bird trapped in the house and a tree growing through the car.

Concerned Pauline Blake, 76, had tried to get John Noble’s attention by knocking on his door because she was concerned for the bird’s welfare.

The neighbour of recluse Mr Noble, 75, raised the alarm after spotting a jackdaw trapped in his dilapidated three storey home.

After a few days of getting no response from her neighbour – who she had rarely ever seen outside for nine years – Mrs Blake dialled 101 for non-emergencies and police arrived within 15 minutes.

They broke down the door of his Huddersfield home and eventually made the grisly discovery of his mummified corpse.

Today, Mrs Blake, who was walking her two and a half-year-old Chi-Poo Sidney, recalled the macabre events.

She said: “The house was in a really bad state, with broken windows, an overgrown yard with a tree growing up through his abandoned car.

“I had seen the poor jackdaw at the top window for a couple of days and it looked trapped inside.

“I was knocking on his door and calling out to him to ask if he would please go up to the bedroom and let the bird free.

“This went on for a number of days, but I obviously got no response.

“In the end, I called the non-emergency number and the police said they would come to see if everything was okay.

“After knocking on the door and getting no response the police broke in.

“It was a while before they found Mr Noble because there was a lot of clutter in his house.

“In the nine years I have lived here I had never seen him take any rubbish out.

“I never spoke to him and only ever saw him three times in all. He just didn’t come out of his house – that was his choice.

“I would sometimes hear him coughing, but that’s about the only sound I ever heard from that house.”

She said his sons had recently tidied up the yard and taken away a lot of rubbish from inside the house.

John Noble became a recluse after splitting with his partner and had not seen his son for nearly 30 years.

A paramedic estimated that Mr Noble may have been dead for more than a year when he was found due to the “mummified” state of his body.

An inquest heard that the front door of his home in Huddersfield was blocked by a large pole that formed a makeshift barricade.

A police officer found Mr Noble’s body next to a settee.

The officer said: “John was in a state of what I can only describe as mummification.

“I conducted a search of the property to find many rooms full of items of food, beer and videotapes.

“I went through the house where there were several containers with urine in them. These were all downstairs around the house.

“At the front door, he had placed a long wooden pole inside the property to block the door shut.

Mr Noble’s brother, Roy, who attended the house after his brother’s body was found, told police he had seen his brother a year ago and he would not answer the door to anyone.

Roy said he had to talk to his brother through the letterbox. He said his brother had problems with local youths who had often damaged the windows which had then been boarded up.

Roy said his brother had split up with his partner 30 years ago and had then become a recluse and isolated himself more.

In a statement, Mr Noble’s son Gary said he was estranged from his father.

“I had not seen him for 29 years. My father sadly pushed people away due to his drinking and also his mental health issues.”

The coroner, Martin Fleming, recorded a narrative conclusion. He said a post mortem examination was unable to establish the cause of death because of the advanced state of decomposition.

Mr Fleming said: “Very sadly in this case, after the split with his wife some 30 years ago John became something of a recluse, shunning family, friends and neighbours, along with any possible help from doctors and social services.

“I’ve heard it was extremely uncommon for his neighbours to see him as he very rarely, if ever, left his home address.”

Mr Fleming added: “There is clear evidence that John was not looking after himself and self-neglecting.”

The coroner added: “This is such a sad case. It’s clear that John needed help. It’s clear he was self-neglecting but it remains unknown if this caused or contributed to his death.”