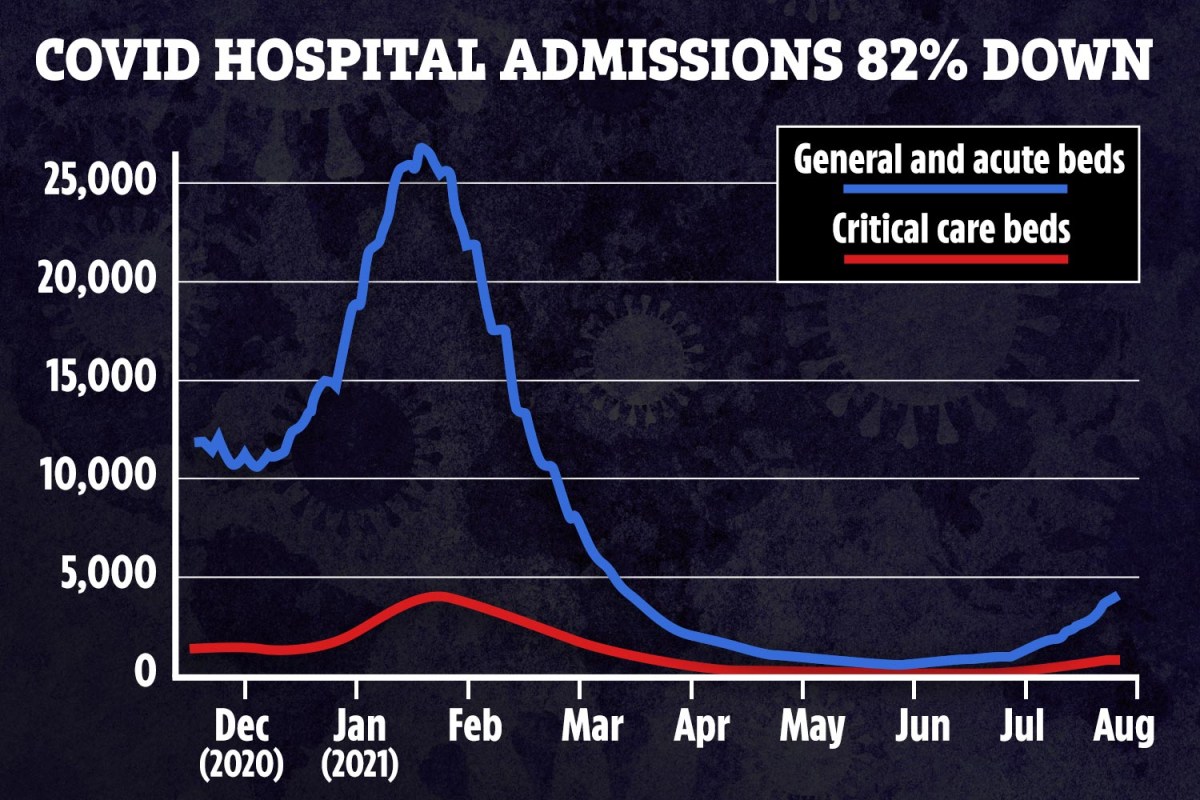 
COVID hospital admissions in England have plunged by 82 per cent from the winter peak – raising hopes Brits may soon be able to put the pandemic behind them.

Despite doomsday predictions of soaring cases and hospitalisations over the summer, infections appear to have stabilised at around 30,000 a day.

And with 86million jabs doled out, the UK may well be turning the tide on the virus.

On January 22, 4,096 people were in critical care beds suffering with Covid, while 1,041 deaths were recorded.

As of the end of July, 817 people were in ICU battling the virus. There were 131 fatalities reported on the same day.

Meanwhile, in England, 747 people were admitted to hospital with Covid on August 4.

That’s almost 82 per cent down from the peak on January 12, when 4,134 people were hospitalised.

Boris Johnson was reportedly one of those most surprised after cases levelled out after Freedom Day last month.

The PM is said to be “the most pessimistic in the room” when it comes to talks on the UK’s Covid response.

Just weeks ago, Brits were warned by new Health Secretary Sajid Javid that there’ll be 100,000 cases a day by the end of the summer.

He made the grim prediction after the Government’s scientific advisers said ending rules on mask-wearing and social distancing would lead to a significant spike in both cases and hospitalisations.

But the situation is much more positive than predicted.

And there was even more good news this week after it was revealed that the epidemic is shrinking faster in Britain than almost anywhere else in the world.

Public Health England said the crucial R rate — a measure of how virulent it is — has plummeted as low as 0.8 for the first time since lockdown.

The current R rate means every ten people infected are now passing it on to just eight others.

As long as the rate remains below one, the outbreak is shrinking. The further below one it gets, the faster it will shrink.

R rates are much higher across Europe and the world.

Some experts are now predicting there’ll be no more lockdowns in the UK, even if cases rise when schools return.

Sir John Bell, regius professor of medicine at Oxford University, told the Times that autumn was “going to be fine”, adding: “We’re past the need for lockdowns because of the vaccine.”

“We’re almost living with it now, we’re getting back to business as usual,” they said.

However, others cautioned that the situation is “uncannily like last summer”, after which infections spiralled, reaching a peak in January.

One expert said: “It just shows you we don’t have a clue what we’re doing.”

And epidemiologist Professor Mark Woolhouse has urged the Government to “leave the door open” for future restrictions.