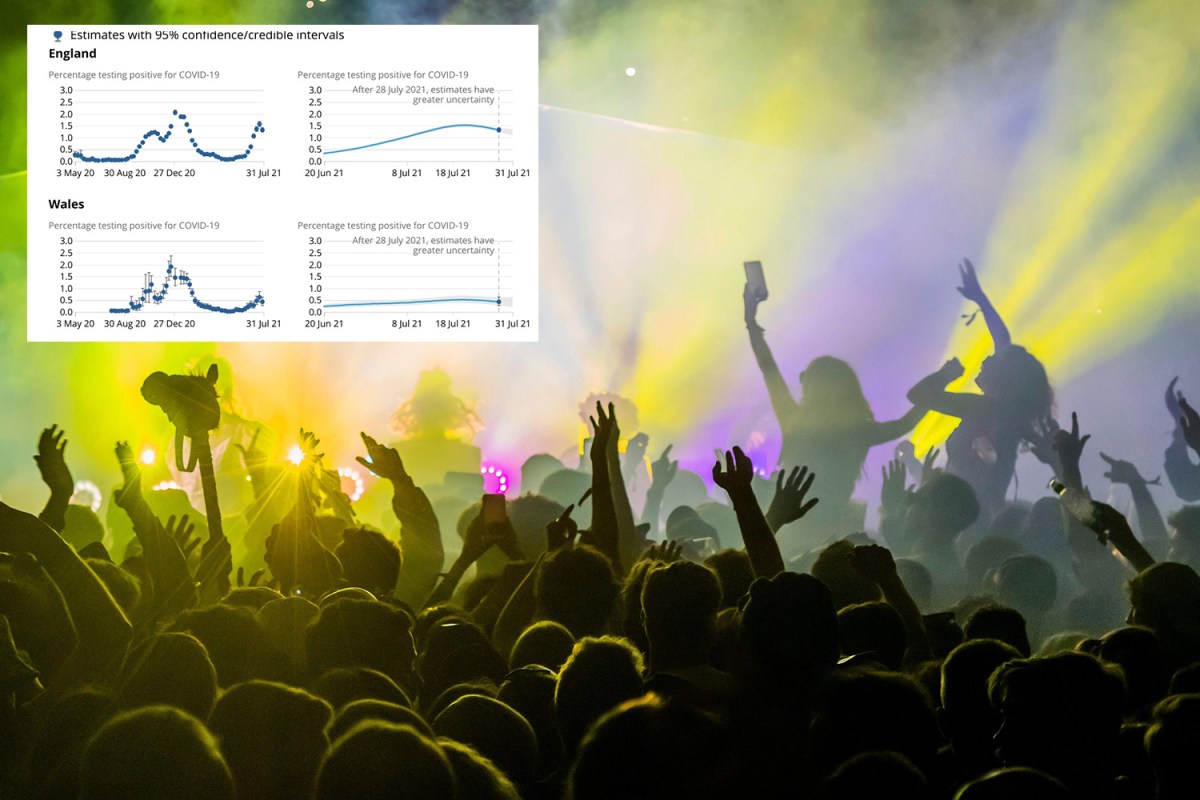 The largest infection survey also revealed that cases are down for the first time in months, other than in Northern Ireland.

Data shows that the R rate could be as low as 0.7 in the North West and the North East.

The R rate – how many people an infected person spreads the virus to – needs to stay below 1 in order for the outbreak to get smaller.

The Office for National Statistics (ONS) said the number of people with the virus in England has come down in its first set of data reflecting “Freedom Day”.

In the week to July 31, one in 75 people in England had the virus, which is down for the first time since mid-May.

The estimation for Wales is one in 230, and for Scotland one in 120. But in Northern Ireland, it has soared to one in 55 people.

North-east England had the highest proportion of people of any region in England likely to test positive last week – around one in 40.

South-eastern England had the lowest estimates – around one in 120.

Fresh data from the UK Health Security Agency (UKHSA) however showed that the North East had one of the lowest R rates in the country.

Both the North East and Yorkshire as well as the North West have an R rate between 0.7 and 1 – despite previously having been Delta hotspots.

The East of England, London and the South East all have the highest R rates in the country between 0.9 and 1.2.

The UKHSA also stated that the growth rate in England is currently between -3 per cent and 1 per cent.

They explained: “A growth rate of between -3 per cent and 1 per cent means that the number of new infections could be broadly flat, shrinking by up to 3 per cent every day, or growing by up to 1% every day.

“These estimates represent the transmission of Covid-19 2 to 3 weeks ago, due to the time delay between someone being infected, developing symptoms, and needing healthcare.”

The data comes as a huge relief after scientists feared the declining daily case numbers reported by the Government were a fluke.

ONS data, published every week, did not match up to the sudden drops in case numbers on the dashboard.

It left experts wondering if the change was due to fewer people getting tested for Covid, or because kids were no longer being swabbed in school.

But now, the trends mirror the Government figures, suggesting cases really are falling.

The survey captures people who do and do not have symptoms of the virus, which is different to the Government data which is only those diagnosed with a test (likely because they had symptoms).

Commenting on the data, Prof Rowland Kao, the Sir Timothy O’Shea Professor of Veterinary Epidemiology and Data Science, University of Edinburgh, said: “As the ONS survey is intended to be a random and therefore unbiased sample of the population, it is a more robust source of information than the case data.

“And so this decline in numbers (with appropriate statistical uncertainty) is reassuring.”

“Whether or not they do again, will depend on a set of transient, complex factors that have been influencing the various data streams.

“These include school holidays, weather impacts, changes in restrictions, the end of the Euro 2020 tournament, the ‘pingdemic’ and possible shifts in human behaviour.”

Growing evidence of a shrinking outbreak

The Government data on case numbers shows the number of people testing positive has come down 10 per cent in the past week.

An initial drastic decline was seen from mid-July. But the pace has now slowed down.

Another large outbreak-tracking study has suggested that the third wave peak is already over.

The ZOE Covid Study app reported yesterday around 46,905 people were getting sick with Covid symptoms each day – a drop from 60,271 the week prior.

Dr Claire Steves, lead scientist and Reader at King’s College London, said: “According to the latest ZOE incidence figures, the number of new daily cases in the UK has finally begun to fall, with a UK R value around 0.9.

“This is the good news the UK has been waiting for but, we mustn’t get ahead of ourselves, this pandemic definitely isn’t over yet as cases remain very high.”

With the virus in high circulation, Brits have been urged to keep coming forwards for their Covid vaccines.

Around three in ten young adults (18 to 29) in England still have not had their first dose.

It means some 2.6 million 18 to 29-year-olds remain unvaccinated.

At the same time, this age bracket make up around 20 per cent of Covid hospital admissions, the new NHS Chief Executive Amanda Pritchard revealed this week.

Public Health England warned today that vaccines are the best way to prevent hospital admission or death from Covid disease.

The agency also warned jabs cannot prevent vaccinated people who are carrying the Delta strain from passing it onto others.

PHE said initial findings “indicate that levels of virus in those who become infected with Delta having already been vaccinated may be similar to levels found in unvaccinated people”.

It continued: “This may have implications for people’s infectiousness, whether they have been vaccinated or not. However, this is early exploratory analysis and further targeted studies are needed to confirm whether this is the case.”

Dr Jenny Harries, Chief Executive of the UK Health Security Agency, said: “Vaccination is the best tool we have in keeping ourselves and our loved ones safe from the serious disease risk Covid can pose.

“However, we must also remember that the vaccines do not eliminate all risk: it is still possible to become unwell with Covid and infect others.

“It is still vital that we exercise caution, particularly while cases are high.”