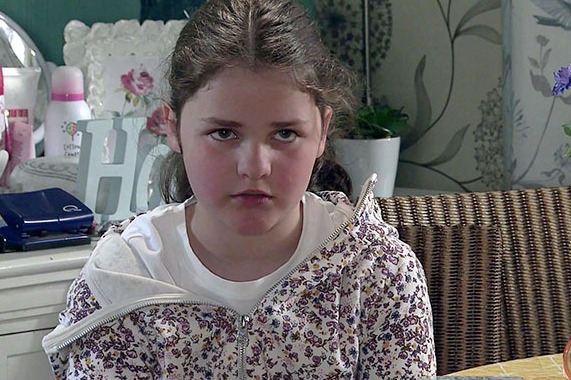 
CORONATION Street fans were thrilled as Tyrone Dobbs and Fiz Stape FINALLY come clean to the police about arsonist Hope.

After admitting to Alina that Fiz has decided to take the rap, Tyrone buckles under the pressure and tells the police that Hope started the fire.

Fiz was left distraught when she isn’t charged and was told that new information had come to light.

When the police tell Fiz they know Hope started the fire, she tries to deny it but ends up breaking down.

Fiz is released with a caution and raged at Tyrone for betraying Hope when she finds him waiting for her.

Evelyn forces Tyrone and Fiz to make peace and focus on helping Hope as they prepare her ahead of her arrest.

Fiz tells her troubled daughter: “The police will want to talk to you about it tomorrow.”

Hope replied: “I’m going to holiday camp, we’re having a treasure hunt, there will be chocolate coins and everything.”

“Hope, for goodness sake, just forget about that for now,” Fiz angrily said.

Tyrone added: “When the police ask you about the fire, you need to tell them you’re really really sorry.”

The youngster replied: “It was an accident.”

Tyrone then explained that it was a dangerous thing to do as it put Alina in hospital.

Hope cruelly responded: “She’s fine and anyway it doesn’t matter about the cot now because there’s no baby to put in it.”

The terrified parents were left horrified at Hope’s comment, Fiz sternly told her: “You’re going to have to tell the police you are very sorry and you won’t ever do it again.”

Before storming off, she replied: “Sorry…not sorry,” leaving Fiz and Tyrone gobsmacked at her lack of remorse.

ITV viewers were happy that Tyrone and Fiz stopped covering for their troubled daughter and came clean.

One fan wrote: “That was a outstanding episode of #Corrie and I glad Tyrone reports evil Hope to the police.”

Another shared: “See Fiz, Hope needs help. She knew exactly what she was doing, I doubt she wanted to actually kill Alina but didn’t care with the outcome.”

A third added: “At least Fiz is actually sticking around long enough for Hope to talk to the Police this time & not just tryna make a desperate run for it again.”