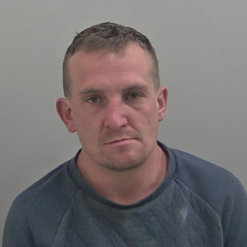 
POLICE are hunting a hit-and-run driver after a man and his dog were mowed down and killed.

The 63-year-old man – who has not been named – was run over and left for dead while walking his pet in Alvechurch, Worcestershire.

Police believe 28-year-old James Bullock was the driver – as they release a picture of the suspect in a bid to track him down.

A man and a woman, both 27, have also been arrested on suspicion of causing death by dangerous driving.

Cops rushed to the scene shortly before 6pm on Sunday to reports of a crash.

Tragically, both the man and the dog were dead when they arrived.

West Mercia Police sergeant Liam Bennett said: “We believe that Bullock is the driver of the vehicle that was involved in the fatal collision on Redditch Road in Alvechurch last Sunday and we would ask that if anyone has information regarding his whereabouts to please contact us as soon as possible.

“Bullock has links to Malvern, Kidderminster and Hollywood.”

The car – which sustained front end damage – was found abandoned nearby.

Police have urged anyone with information on where James Bullock is to call 999 immediately.

Alternatively, Crimestoppers can be contacted anonymously on 0800 555 111.