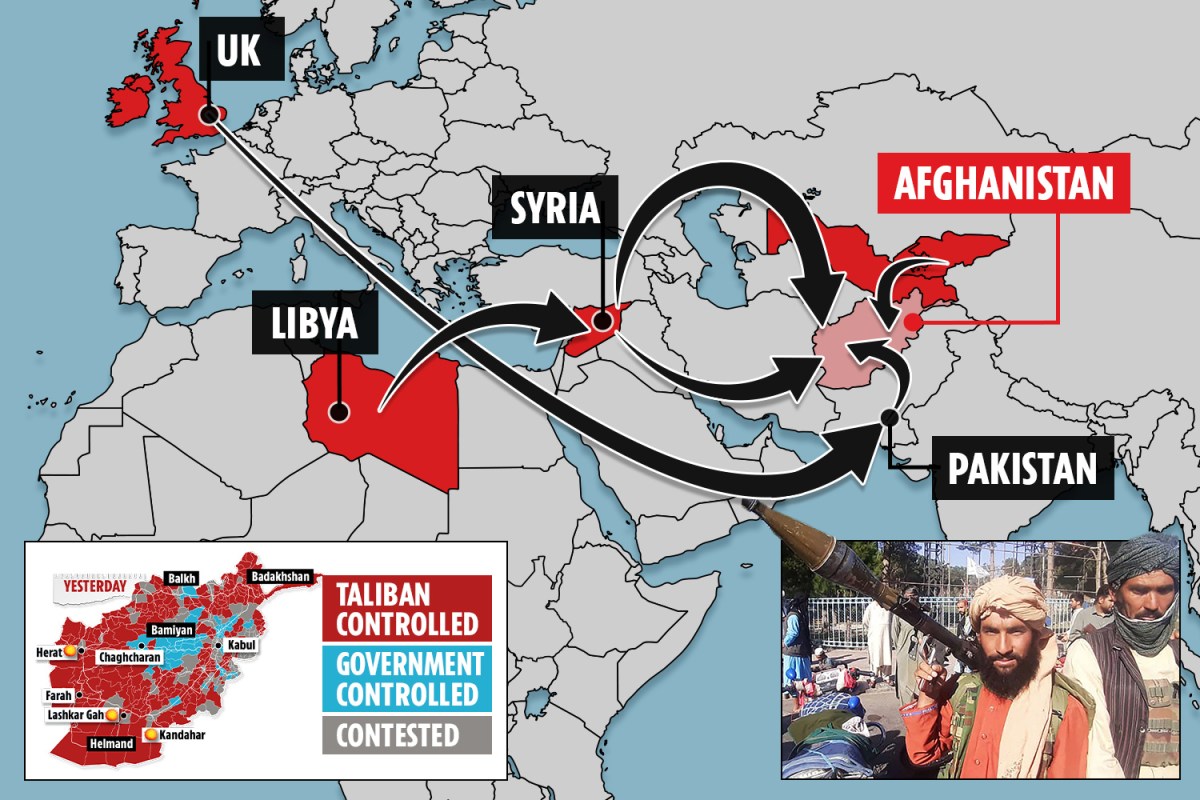 
FOREIGN fighters are flocking to Afghanistan to launch a new terror war on the West as the Taliban tears through the country.

Jihadis from the UK, Syria, Libya and central Asia have been heading to the war-torn country to take advantage of the Taliban’s open door to global terror.

Their lightning advance has taken the fanatics to within striking distance of the capital Kabul and disturbing stories have emerged of young Brit jihadis travelling there.

The British security services have already intercepted phone calls of militants with British accents as they openly talked on their mobiles.

“One had a London accent, what you might call a street accent,” a military intelligence source said.

Now experts are warning that ISIS fighters are flocking to Afghanistan in a chilling echo of the Islamic State Caliphate the maniacs once controlled Syria and Iraq.

They include hardened ISIS fighters from Syria, while terrorists from central Asian nations north to the country have already used the country as a base for a terror plot.

There have warnings from Russia that even terrorists from the ISIS branch in Libya, made up of many African jihadis, could also be making their way to the war-torn country.

Professor Anthony Glees, from Centre for Security and Intelligence Studies at the University of Buckingham, predicted Afghanistan will soon become a “crucible of Islamist terror”.

The Taliban previously hosted Al-Qaeda and according to terrorism expert Rafaello Pantucci, they operate a policy that welcomes anyone who shares their warped views.

Should the Taliban take over Afghanistan once again, it’s likely jihadis from around the world – including ISIS – will set up bases there, says Pantucci from the defence think-tank RUSI.

ISIS will then start to use Afghanistan as a safe haven for coordinating attacks on the west – with even a 9/11 scale attack possible.

“There have been ISIS people who have gone from Syria to Afghanistan and these are pretty committed fighters,” he said.

“At present they could use and develop a base there to be used for talking to people and inspiring them to do stuff abroad and sending money to them.

“At present I don’t there will attack on the scale of the 9/11 attack – but in the future I wouldn’t want to discount that.”

Pantucci said that Pakistan is a likely route for many young Brits looking to get to Afghanistan to join ISIS.

“Sadly we’ve seen that story before and there’s little reason to think that wouldn’t happen again,” he said.

“If you are of Pakistani heritage and have links to that country then it would be fairly easy for you to have access to Afghanistan.”

Pantucci said a suspected terror plot in Germany, in which four men from Tajikistan were accused of plotting to attack US and Nato military bases, could be a template for ISIS operations.

One of the suspects is accused of carrying out instructions from high-ranking ISIS leaders in Afghanistan.

Around 800 Brits travelled to Syria and Iraq at the height of the rule of ISIS and hundreds are still unaccounted for.

Prof Glees said if ISIS and other groups set up bases in Afghanistan they will serve as a draw for those “beguiled” by jihadi propaganda.

“For jihadis it’s important to have a physical entity to defend and that’s why the Islamic State was so important – it wasn’t just and idea it was a reality,” he said.

“There is every reason to fear that people from Europe, including from the UK, will be drawn to Afghanistan.

“Islamists are drawn towards something that they can fight for and Afghanistan will become a play where they will to become trained in the art of war.

“It will become the crucible of terror once again.”