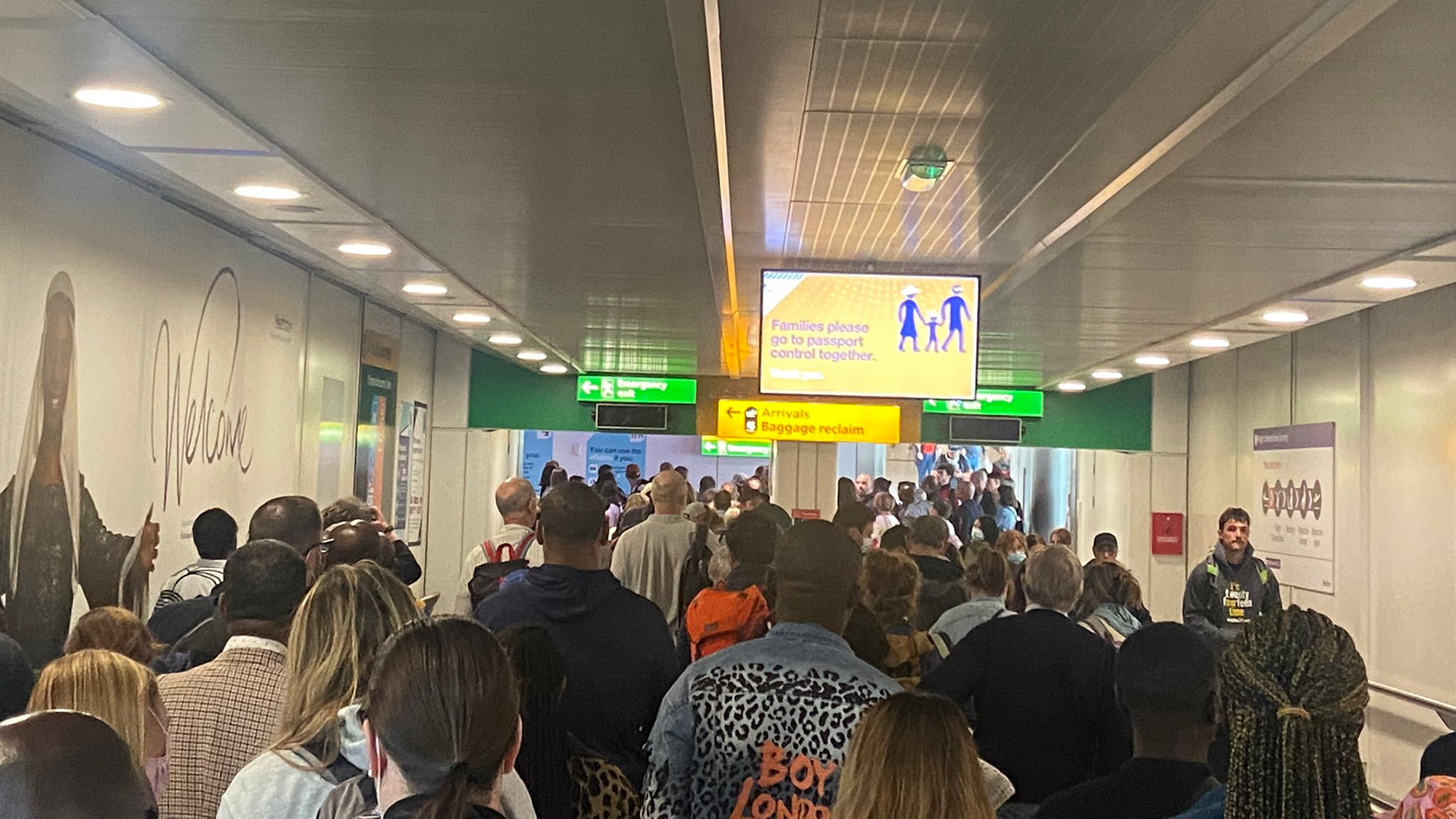 
FUMING Brits have been forced to sleep on airport floors and wait in huge queues at airports across the UK as travel disruptions continue across the country.

Passengers at both Heathrow and Gatwick complained that they had to wait hours to get through the airport in the early hours of the morning.

One woman said: “Never seen such a long queue for security at @Gatwick_Airport. Good job I’ve still got a few years on my passport or it would expire before I get through.”

Another man wrote: “@Gatwick_Airport hey, I’m going to miss my flight I was two and a half hours early for, because you’ve got over a thousand people queuing for security and no staff. Any advice?”

Another traveller shared a picture of huge queues at 3:30am just for people looking to drop their bags off which snaked around the terminal.

Passenger Vicky Murphy wrote: “Absolute disgrace this morning at North terminal baggage drop. Not one member of staff directing a queue of people and now the queue for security is this….. It’s a joke!”

A Gatwick Airport spokesperson confirmed that the large queues were due to issues processing passengers, but that queues were still less than an hour.

They told Sun Online Travel: “EasyJet are having some issues processing passengers in our North Terminal this morning.

“We are working with the airline to help get people moving through the airport and on to their flights as fast as we can.

“A queue for airport security has also formed in our North Terminal.  The queue is moving however and current wait time is approx 35 minutes.”

It’s not just airports causing problems either – some travellers said they had to sleep on the floor after a number of flight cancellations.

One man said his family had their flight cancelled at Manchester, only to travel by coach to Gatwick for five hours – then had to sleep on the floor with “no food, drinks or explanation”.

On Monday, Gatwick Airport passengers were affected by a number of easyJet cancellations, which affected flights in and out of the airport.

One mum said her daughter was left “in tears” while others had to sleep on the floor.

And more flights have been cancelled by easyJet today – passenger Peter Kendall wrote: “Furious passengers at Gatwick have flight to Belfast cancelled at the last minute. Now we can’t get out of the airport and some passengers faced the same experience yesterday!”

Another man said: “Have just cancelled my flight to Belfast from Gatwick half an hour before it was supposed to take off. No information for passengers. Ridiculous.”

A third wrote: “Stranded at Gatwick this morning after my flight to Belfast city was cancelled right as the gate was meant to be announced no help apart from being escorted out and told we had to arrange an alternative flight ourselves.”

Travellers have been affected by long airport queues and cancelled flights for months since many travel bans were lifted around the world.

There are now fears the travel mayhem could continue for the next year due to staff shortages hitting the industry.

Kully Sandhu, managing director of the Aviation Recruitment Network, warned it could take “at least the next 12 months for the industry, vacancy wise, to settle down”.

He said it wasn’t just Covid causing problems in hiring new staff, of which he said there were more than 300 vacancies across UK airports, but also Brexit.