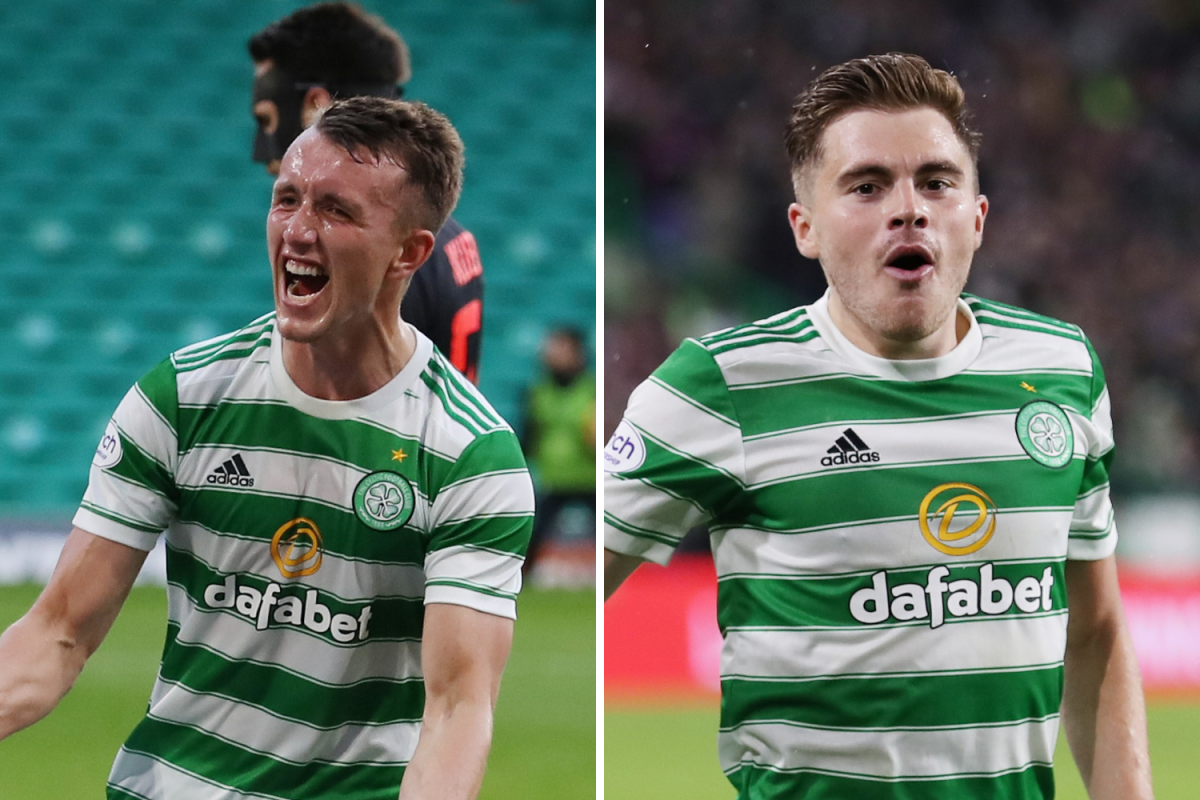 Postecoglou’s sixth game in charge brought the best performance yet from a fast developing Celtic side who booked a Europa League play-off against AZ Alkmaar.

They swept aside Jablonec with an often exhilarating attacking performance.

A double from man of the match David Turnbull and a late third from James Forrest failed to give the Celts full reward for their almost total control.

And all on the day the club announced a complete sell-out of season tickets, around 55,000.

The absence of Liel Abada was a surprise with Postecoglou stating 24-hours earlier there were no squad issues.

Forrest – excellent in the first leg in the Czech Republic – wasn’t exactly a bad replacement in a starting line-up otherwise unchanged from the thrashing of Dundee.

Momentum’s everything for Celtic after last season’s shocking campaign – and they’re now building up a head of steam.

Jablonec are currently seventh in the Czech First League after three games and that’s a pretty accurate reflection of their quality.

They were here to avoid a hiding. To play for pride.

Boss Petr Rada had talked the night before of anything being possible in football.

But deep down he knew the tie was over.

Moments before kick-off there was a deeply poignant ‘pause and applause’ to remember all those lost during the pandemic.

Thereafter the atmosphere was electric.

Celtic had permission for a capacity crowd but there weren’t 60,000 fans inside, with the main stand especially full of empty seats.

But the noise level was still spine-tingling for the Hoops players.

And before even 35 seconds had passed there was action at both ends.

Dominik Plestil showed stunning pace to burst down the right and get past Carl Starfelt for the byeline.

But his cross lacked direction and Joe Hart held it comfortably.

Moments later Kyogo Furuhashi was put clean through by a Tom Rogic pass and he had all the time in the world as he drew out Jablonec No1 Jan Hanus.

But he probably had too long to think about it and the well off his line Hanus guessed right as the Japanese striker tried to go round him, sticking his leg out to clear.

Furuhashi – four goals in two games – was disgusted with himself.

The pace of Celtic’s play from the start was impressive – and play was frequently started by the composed Hart, happy to clip a pass wide or even through the middle.

The ball was a blur at times as the Hoops didn’t mess about going forward, always looking for the fleet-footed Furuhashi to break through.

It happened in the sixth minute as Turnbull – playing with real confidence and liking a pass with the outside of his right foot – – sent in the £4.5 million new darling of the Celts support.

But his pass was slightly over-hit, allowing the alert Hanus to race out and kick clear.

Furuhashi put the ball in the net with his right foot at close range after 13 minutes.

But before it reached there the flag of main stand assistant Jan Seidel had already been raised for offside following Forrest’s pass.

Shame that because it was a fine, clinical finish.

But it was no problem for midfield technicians Callum McGregor, Rogic, Turnbull and Ryan Christie – spraying the ball about for fun and full of flicks.

Jablonec’s first moment of threat came in the 18th minute; David Houska’s right foot half volley from 20-yards well over.

Then Milos Kratochvil did likewise in a brief, decent period for the visitors.

But the belief coursed through Celtic – and Turnbull tested Hanus with a powerful right foot shot from the edge of the box.

A goal was on the cards.

And it was Turnbull who delivered it in the 25th minute with effortless style.

Determined work by high-up left-back Greg Taylor left him with the chance to stab the ball into the box for the playmaker who deftly stroked the ball past Hanus.

It was Turnbull’s first goal of the season and you can’t imagine it will be his last.

That was the tie well and truly done.

Three minutes later Taylor coasted down the left and tried to find Furuhashi – superb at getting into place – with a low cross.

But Hanus was sharp to smother it down to his left.

That Celtic started slowing up approaching half time was no surprise – and Jablonec came back into it.

Hart had an easy 39th minute save from Houska.

Jablonec had to be happy, though, being just one down at the interval.

They started the second half well, with Jakub Povazanec shooting over, seconds after Carl Starfelt came perilously close to conceding a penalty with a rash challenge.

But Celtic soon stepped it up again – and went two ahead in the 55th minute.

Taylor and McGregor combined before the latter’s square pass to Turnbull was promptly dealt with – a magnificent right foot shot from 25-yards flying past Hanus.

Furuhashi was clattered by Hanus on the hour in a 50-50 and it wasn’t long after he was subbed.

A slack pass-back from McGregor let in striker Martin Dolezal but his point-blank right foot shot was magnificently parried wide by Hart – to huge acclaim.

And just seconds later the former England No1 did it again to deny Kratochvil.

The Hoops completed an excellent night with a 73rd minute third from Forrest after Hanus saved from sub Odsonne Edouard.