Celebrity MasterChef… for once it is the Bez thing on TV 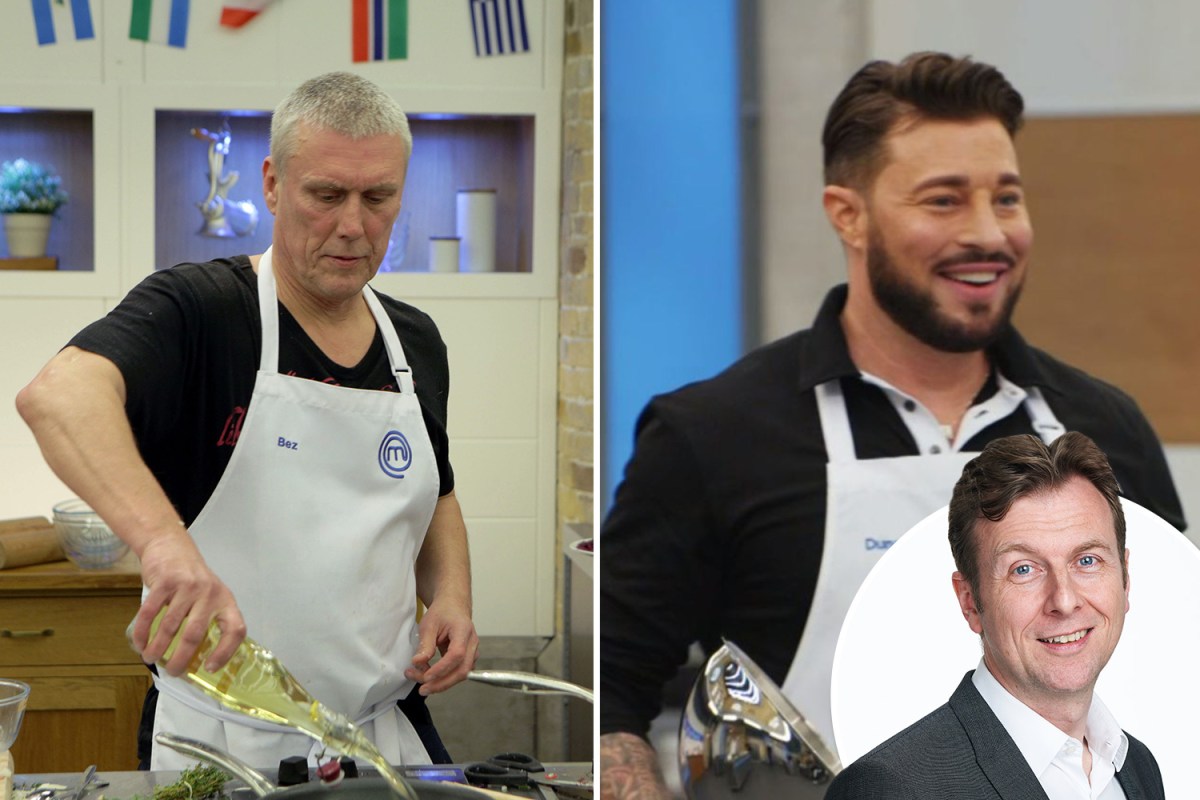 
STRANGE but true, there’s no mainstream British television show that’s too stale and run-of-the-mill to be turned into a bit of an event by the simple addition of one or more of the Happy Mondays.

You don’t believe me? Watch Bez and Shaun Ryder’s hypnotic appearance every week on Celebrity Gogglebox, or band members cheat their way to victory, against Pulp, on a Bargain Hunt Britpop special.

Or better still, just savour Bez’s turn on the new series of Celebrity MasterChef, a show that always seems to hang around far too long yet is still fairly obviously doing its two hosts, John Torode and Gregg Wallace, all the favours, rather than the other way round.

It’s fortunate, of course, to be up against a copycat show as bad as ITV’s Cooking With The Stars.

The line-up, though, remains everything. A quirky one can lure you in for the duration and, on this score, MasterChef surpassed itself in week one. To such an extent, Bez wasn’t even the weirdest-looking member of the original five.

Oddest was definitely the Dolmio puppet, smirking away at the back of the kitchen, who turned out to be Duncan James from Blue, a martyr to hair dye now that he’s entered the “genie of the lamp” phase of his career.

Duncan had fairly stiff competition, however, from ex-EastEnder Rita Simons (a handful) and Hi-de-Hi! actress Su Pollard, who still hasn’t found her internal “off button”, even after 71 years.

Fifth wheel in this BBC1 arrangement was an “online sensation” called Munya Chawawa, who was completely lost on me but has clearly understood that talent, material and timing do not enter the equation these days. All you really need to call yourself “a comedian” is a brass neck.

I can put up with one or two MasterChef passengers, though, if the more famous contestants bring the laughs and lend themselves to innuendo as easily as Duncan James, who was handed a large purple vegetable for the first task, but confessed: “I’ve never cooked with an aubergine in my life.”

He’s eaten a few and texted a lot, obviously, but Duncan’s no more comfortable cooking an aubergine than he was being asked to: “Do a chutney two ways.”

If that dish watered the eyes it was nothing compared to the mental somersault of Su’s “juicy pear” or Rita’s “spicy jerk”.

For all the production team’s mischief-making, though, the star of the show, by simple virtue of being himself, remained Bez.

Food, it’s very clear, has not played the most significant role in his life. From the late 1980s onwards, Bez seems to have survived entirely on crisps and tomato ketchup, which may explain why he’s a human landfill site in the kitchen and stirs pasta with a rolling pin.

Bez, though, certainly doesn’t lack ambition, as he made crystal clear before his “dinner party menu”.

Gregg and John, though, put him through twice because they “see something in Bez”. And it could be, as they claim, his use of seasoning, but I’m more prepared to believe it’s down to the fact he’s a sweet-natured, likeable guy who brings a magic ingredient to every hit-and-miss filler show.

By its repetitive, thieving nature, television will eventually overdo the joke, if it’s not very careful.

But, in a schedule filled with nothing but dross and repeats elsewhere, Bez once again gave entertainment and rhythm to the television week: Happy Monday, thrilled Tuesday, probably f*** it up Friday (BBC1, 9pm).

CELEBRITY MasterChef, Su Pollard: “I’m having a flipping orgasm about pasta. What’s the matter with me?”

ANY minute now, I thought, watching Love Island’s “fight night”, ITV will start telling us just how much it cares about mental health, “the welfare of its contestants” and blah blah blah.

They had a dud series on their hands, which meant someone had to be thrown to the wolves to raise the show’s profile.

So ITV2’s production team created the “Mad Movies” game, then set about taunting the Islanders with incriminating footage from Casa Amor and plying them with alcohol to the point someone exploded.

No real surprise the obliging fool in question was Faye Winter, the gobby girl with the novelty sofa lips, who’d seen Teddy doing something her insecurities couldn’t handle and certainly wasn’t going to pass up the opportunity to get on her high horse.

What was a bit of a shock was the duration Faye’s foul-mouthed tirade and the fact she wouldn’t let up until she’d told every single part of Teddy to “F*** off”, including his sandals.

Indeed, so prolonged and righteous was Friday’s hissy fit, Faye didn’t even calm down and offer grovelling apologies until Tuesday’s episode. By which time, ITV had put on its mental health mask and got Monday’s Good Morning Britain to read out a statement dripping with corporate compassion.

“ITV has promised to increase mental health support this series. We take the emotional well-being of all the Islanders extremely seriously.”

Yeah, of course they do. Just not as seriously as they take the financial well-being of all their advertisers.

Unexpected morons in the bagging area

TENABLE, Warwick Davis: “We’re looking for the ten most populated cities in France?”

Tipping Point, Ben Shephard: “In which decade was the NHS founded?” Roy: “The 19th.”

BBC2’s dangerously skewed documentary The Riots 2011 taking an hour and 25 minutes to admit gangster Mark Duggan was armed when the police shot him.

The once funny and cheerful Love Island manipulating itself into Big Brother territory. And Iain Stirling’s Buffering becoming the first sitcom I’ve ever seen to conclude with a miscarriage and an offer of helpline advice. An entirely necessary move, just not for the reasons ITV2 thought.

Unfinished sentence of the week

This Morning, pet taxidermy, Ruth Langsford: “Eamonn and I disagree on this. He says he’d love to have our dog Maggie stuffed, but . . . ”

But what? You’d rather have the pan-fried sea bass?

Incidentally, in case anyone thought it was only BBC Olympic commentators, like Leon Taylor and Shanaze Reade, who confused themselves with cheerleaders, here’s Eurosport’s team failing to describe the men’s quadruple sculls.

Jonathan Harris-Bass: “What happened to the Italians there?”

Gillian Lindsay: “No idea. I’m only focused on Great Britain.”

Then maybe give your job to someone who does.

GREAT TV lies and delusions of the week. Cooking With The Stars, Rosemary Shrager: “This is not the last you’ve seen of Johnny Vegas, believe me.”

Love Island, Liberty: “Someone will be lucky to have you as a girlfriend, Faye.”

You’ve got Su Pollard and Duncan James and “world famous” is really pushing it.

SAM Quek: “Tom Daley’s story is something short of remarkable.”

Ed Leigh: “Samoa is a ‘did not finish’ because he did not start.”

Lutalo Muhammad: “You can’t ask for more than a bronze.”

Mark Pougatch: “I’m not saying he’s the most popular owner in the league but there’s no one more popular.”

THE incredibly touching footage of a tapir giving birth on C4’s The Secret Life Of The Zoo.

Celebrity MasterChef’s Rita, Su and Bez too line-up. And BBC1’s Olympic coverage pairing the outstanding Hazel Irvine with Chris Hoy, who are one of the main reasons why, despite the often repetitive, fawning, sub-standard and Balding-obsessed coverage, I’m still really missing the Games.

Lookalike of the week

THIS week’s winner is Love Island’s Chloe Burrows and Lois Griffin, from Family Guy. Sent in by Ricky Emerson.