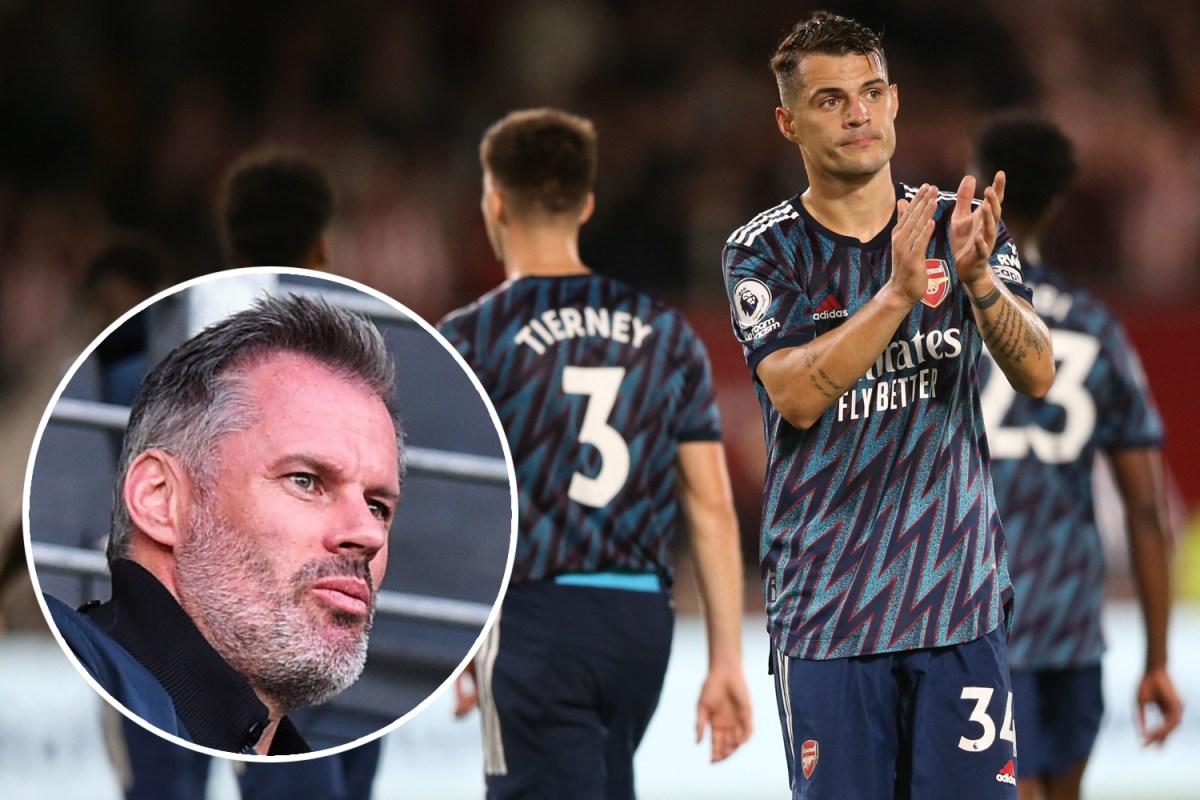 
JAMIE CARRAGHER slammed Arsenal’s defending against Brentford as the Gunners lost 2-0 in their Premier League opener.

The Sky Sports commentator claimed Mikel Arteta’s side were ‘weak’ after they conceded their second goal against the Bees on Friday evening.

Ivan Toney wins the flick ahead of Ben White and Christian Norgaard heads home for Brentford to double the lead! ?

Brentford doubled their lead in the 73rd minute after launching a long throw into Arsenal’s six-yard area.

Striker Ivan Toney got the better of both Pablo Mari and Calum Chambers to flick the ball into a dangerous area.

Arsenal goalkeeper Bernd Leno was nowhere to be seen as the ball bounced in his six-yard box before Christian Norgaard headed home.

Analysing the play on commentary, Liverpool legend Carragher said: “If you’re playing Arsenal, get it in the box.

“Two Brentford players [say] ‘get out of the way’… goalkeeper can’t do nothing. Mari, Ben White, Calum Chambers – nowhere to be seen.”

Carragher then brought up the phrase ‘Spursy’ – suggesting it’s now Arsenal that collapse in the face of pressure rather than arch-rivals Tottenham.

The Gunners failed to lay a glove on Brentford as the Premier League’s newest team eased to their first top-flight win in SEVENTY-FOUR YEARS.

The hosts took the lead at the Brentford Community Stadium in the first-half after a mistake from Arsenal defender Calum Chambers.

The three-cap England international tried to clear the ball instead of letting it go out for a corner, gifting Brentford possession in a dangerous position.

We knew what Brentford were going to be. It was as if Arsenal didn’t.

Spaniard Sergi Canos then punished the visitors by unleashing a powerful shot, beating Leno at his near post.

Speaking to BBC Sport after the game Arsenal boss Arteta said: “I’m disappointed. We started the season against a good opponent.

“I don’t think we deserved anything different. They scored from a long throw-in and we didn’t have enough presence in the box.

“The first goal gave them some hope. We wanted to play better in the second half but we need many more shots on target, then we conceded on a set-piece.

“A lot of young boys were doing everything they can. For some of them it was the first experience in the league – that says a lot.”