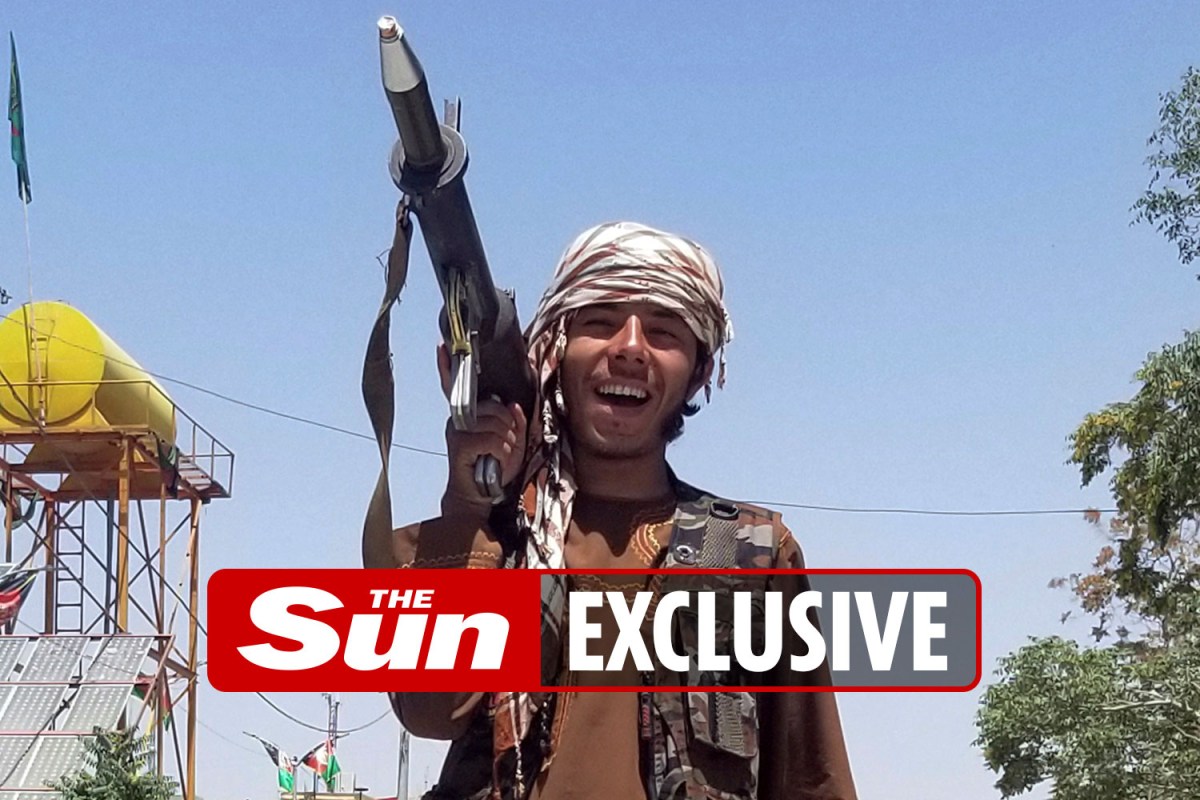 
BRITISH jihadis have secretly joined the Taliban in their terrifying power grab in Afghanistan — amid fears that a takeover would make the country a haven for terrorists.

The phone calls of militants with British accents have been intercepted by spooks. The fighters smuggled themselves into the war-torn country after the US pulled out.

The militants are now reported to have seized the Kandahar, Afghanistan’s second largest city and Lashkar Gah, where UK forces based during their mission in the country.

It comes after they overran Herat — the largest city in western Afghanistan — in a crushing new blow to its government.

As Afghan forces crumble in the wake of the Taliban’s lightning advance, 600 UK troops are due to swoop into Kabul to evacuate our embassy and up to 4,000 Brit workers.

They are joining 3000 US soldiers who have been deployed by President Joe Biden to evacuate Americans from Kabul.

The zealots now hold a third of the nation’s provincial capitals and two-thirds of the countryside.

And there are increasing worries that the capital Kabul could fall “any day”.

The British jihadis secretly smuggled themselves into Afghanistan and joined the Taliban after the Americans pulled out of the country.

Yesterday, a senior military intelligence source told The Sun: “We have received some intercepts of two British men, probably below 30, talking openly on mobiles.

“One had a London accent, what you might call a street accent.”

One security source said there was “intermittent intelligence” showing Brits had taken up arms against the Afghan government, but added: “We have no idea who they are. It’s difficult to put a number on it.”

Defence Secretary Ben Wallace said Afghanistan was spiralling into a failed state that will revert to being a safe haven for terrorists.

“Of course Al Qaeda will probably come back,” he said.

“Failed states around the world lead to instability, lead to a security threat to us and our interests.

“For 20 years we effectively bought a peace on our streets because our Al-Qaeda was unable to launch plots from Afghanistan.”

In a rare criticism of the US, Defence Secretary, Mr Wallace said the deal brokered by Donald Trump with the Taliban was a “mistake”‘.

“That deal that was done in Doha was a rotten deal because it told the Taliban that wasn’t winning that they were winning,” he said.

Of course Al Qaeda will probably come back

“It undermined the government of Afghanistan and now we’re in this position where the Taliban clearly have the momentum across the country.

“We’ll all as an international community pay the consequences of that.”

Rob Clark, Defence Policy Associate at the Henry Jackson Society, told The Sun Online the Taliban advance was so rapid “they could be at the gates of Kabul any day now”.

“There’s very little stopping them actually getting to Kabul. But reaching Kabul is one thing but taking it and holding are two completely different issues.”

General Sir Nick Carter, the Chief of the Defence Staff, last night said: “I think we have already got a humanitarian tragedy. The question now is whether it gets worse.

“If we end up with a scenario where the state fractures, and you end up essentially with a security vacuum, then there are absolutely ideal conditions for international terrorism and extremism to prosper yet again.

Around 800 Brits travelled to Syria and Iraq at the height of the rule of IS and hundreds are still unaccounted for.

Security chiefs believe the British jihadis travelled through Pakistan’s lawless tribal areas in a bid to reach the frontlines.

We have already got a humanitarian tragedy. The question now is whether it gets worse.

The developments come days after General Mubeen, a notorious Taliban commander, made cryptic jokes in a Facebook video about attending Birmingham University.

Ex-Colonel Richard Kemp, who led our forces in Afghanistan, said: “Many British and other foreign jihadists travelled to Afghanistan before and after 9/11 to fight there and, in many cases train, organise and then travel elsewhere for jihad.”

He chillingly warned: “The more gains the Taliban makes, the more it will encourage jihadists to carry out attacks at home and also head for Afghanistan.

“If the country, or a large part of it, is permanently controlled by the Taliban it will again become a safe haven for terrorists as it was before 9/11.

“We are on the verge of a threat no less than that from IS at its height.”

Osama Bin Laden was based in Afghanistan when he plotted the 9/11 attacks.

The Taliban are led by 60-year-old Hibatullah Akhundzada. Afghan sources insisted most of his foreign fighters came from Pakistan.

One said: “We have heard these reports of the British, they have come here before. But we do not distinguish between Pakistani or British Pakistani. If they come here, they will die here.”

Afghans have already had a taste of Taliban brutality with reports emerging that they “going to door to door” to round up young girls to be “sex slaves” for the terror group.

Officials have pleaded with US President Joe Biden to launch air strikes to protect Kabul following his decision to withdraw American ground troops.

The assault came after the militants seized their tenth provincial capital Ghazni, where they broke into a jail and freed 400 inmates.

Thousands of people displaced by the fighting have fled to Kabul and are living in open fields and parks.

Militants were also laying siege to Lashkar Gah in Helmand province, where British forces were based. Women are being rounded up and raped, then being held prisoner.

Officials at the US embassy in Kabul tweeted: “Deeply disturbing & could constitute war crimes.”

Hundreds of thousands of people have fled their homes in Afghanistan, sparking fears of a migrant crisis on a par with Syria in 2015.

Thousands are being smuggled out each day to neighbouring Iran.

Greek migration minister Notis Mitarachi warned the EU is “not ready” for another migrant crisis.

“Those who do return must expect to be investigated by the police.”

‘So, was being blown up worth it? Not at all’

I SERVED three tours in Afghanistan, including the disastrous Kajaki Dam operation in 2006.

On my third tour, in March 2009, I was blown 50ft and left in tatters when the Jackal vehicle I was in in South Helmand hit an IED. I suffered multiple injuries and was medically discharged in 2012 after 11 years in the Army.

My injuries healed, but I was left with mental issues and my life became a roller-coaster. If it hadn’t been for the help I got from the charity Forgotten Veterans UK, I’d be dead now.

In Helmand, I fought alongside the Afghan Army who were some of the bravest soldiers I’ve ever met.

But we all knew that if we left, the Taliban would overrun the country. Watching the news with a friend of mine who was also there, I turned to him and said: “What was the point?”

More than 450 British lives lost and ten times that number of men and women injured or suffering mentally because of their service in Afghanistan.

‘Biden has washed hands of Afghans’

WE have all become used to washing our hands during the Pandemic, but President Joe Biden has taken that to new level – washing his hands of the Afghan people.

And although we have invested £40 billion into Afghanistan and sacrificed the lives of 457 members of our Armed Forces, we had no real choice other than to follow the US troops to the exit.

The Sun newspaper has been brilliant in supporting our brave men and women in uniform in Afghanistan over the last 20 years, but how has it all come to this tragic moment?

With the Taliban controlling two thirds of the rural territory in Afghanistan and now knocking on the doors of the 34 provincial capitals and even Kabul itself, we have to ask the question of what has gone wrong?

After US-led coalition forces drove out the Taliban in 2001-2002, it was the British who formed the core of the very successful International Security Assistant Force that protected Kabul and allowed President Hamid Khazi to form a government.

We should have invested in that success to start to put Afghanistan back on its feet and move into the 21st  century.

But the Americans said that they did not do “nation building” and instead turned their attention to unfinished business in Iraq.

The distraction of the poorly planned campaign in Iraq began to allow the Taliban in Afghanistan the time and space to begin to regroup.

By the time that the UK led a new NATO mission back into southern Afghanistan in 2006, the Taliban were ready and waiting.

Our Army found itself fighting in two campaigns at the same time in both Iraq and Afghanistan – another strategic error.

Even if the strategy was wrong, there is no denying that our soldiers, sailors, airmen and marines – both men and women – did everything that could have been asked of them and more.

As we know, 457 of our comrades paid the ultimate sacrifice and hundreds more have suffered life changing physical and mental injuries, and for them and their families their battles go on.

But until the heartless decision by President Joe Biden was taken to pull US troops out of what they called their “forever” war, much had been achieved in Afghanistan.

An elected government had been put in place, the economy was strengthening and civil life was being transformed.

In contrast to the harsh Sharia regime of the Taliban, the people were being given opportunities about which they could only previously have dreamt.

Women were given a proper place in society and girls – the future mothers of Afghanistan – were allowed to go to school and be educated.

Our investment of blood and treasure in Afghanistan was offering the people the chance to have a better life. That achievement is something of which we should be proud.

Even though the international troops are leaving, and the Taliban are taking full advantage of that disastrous decision, we must go on supporting the Afghan government and the Afghan people.

One thing that our government could do is reverse the cuts in our foreign aid to Afghanistan. This would be a major boost to Afghan morale. The Americans may have cut and run but the UK must do better than that.