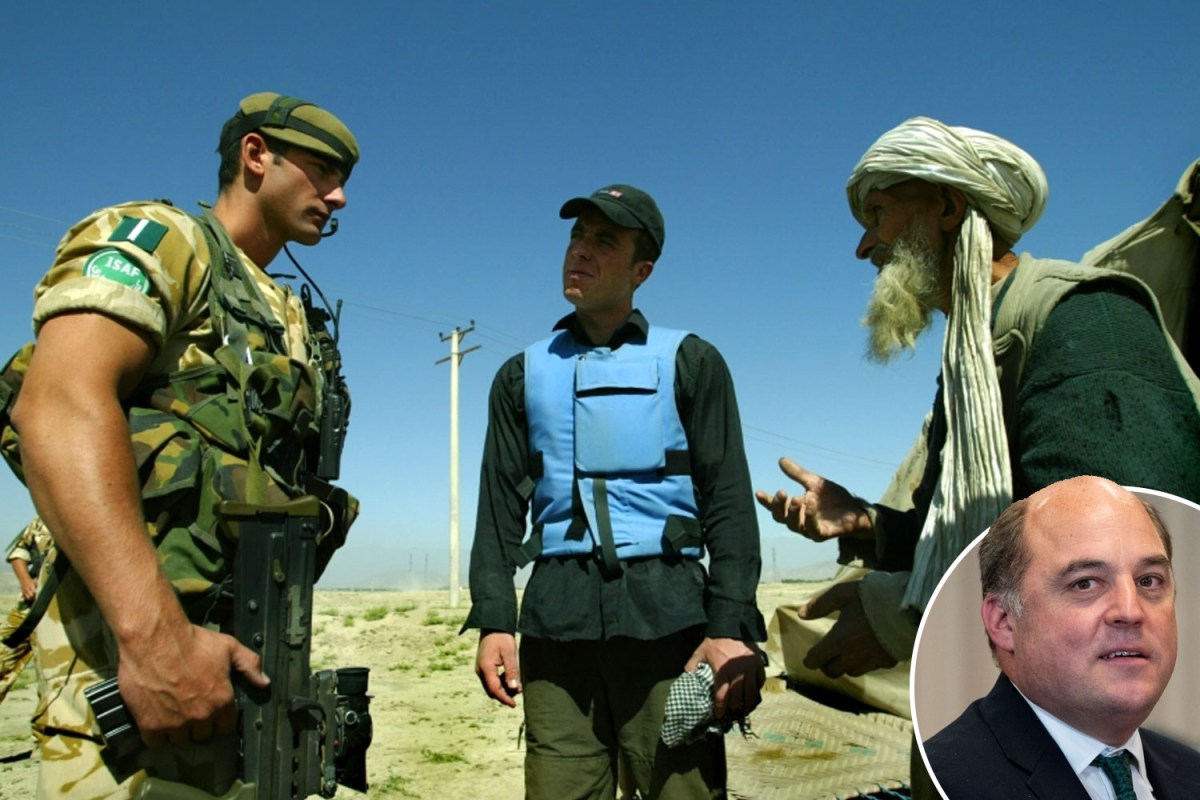 Below, he insists countless British and Afghan lives were saved thanks to our Armed Forces’ sacrifice.

But Mr Wallace, a former Scots Guards captain who served in Northern Ireland, has also previously hit out at the US for hastily quitting Afghanistan.

He has blamed Donald Trump’s “rotten deal” with the Taliban for leading to the Afghan government’s rapid fall and the chaos now gripping the country.

Mr Wallace tried to get allies to stay after US President Joe Biden decided to cut and run.

But with other nations unwilling, he decided it was impossible for Britain to go it alone.

Mr Wallace says we will stand by the Afghans who bravely worked with our troops over the past 20 years and get as many to safety as possible.

EVERY soldier has their conflict. Their shared experience, horrors and bonds. It is what shapes us as veterans.

Each conflict gives rise to stories and shared memories. Whose experience was worse? Who “dropped the ball”?

These discussions go on for years after operations.

They are an immense source of pride and they bind us inevitably to the lands we were posted to.

My tours were in Northern Ireland and, to this day, I remember the people and places. The smell of peat burning in the hearths and the sound of helicopters overhead.

In the early 1990s, it wasn’t the armoured battles of Iraq — and it certainly wasn’t the intensive guerrilla warfare of Afghanistan. But it was my conflict.

So whenever I see a name on a war memorial, I think not just of the tragedy behind it but the experience and story behind the sacrifice.

In Afghanistan, 457 British souls perished. From across the services and a myriad of regiments, my own included, brave men and women were killed by the Taliban. So was it worth it?

For some, the loss of someone you love never is. The conflicts change but the loss is felt the same way every time. But those of us who have served do so knowing any sacrifice is for a greater purpose.

So before people write off the years and sacrifices in Afghanistan as worthless, let me say they were not.

For three years as Security Minister, I saw every day the terror plots directed at us here at home. I saw the consequences of our intervention.

By the end of 2005 al-Qaeda was weak, dispersed and unable to direct, plan or deliver attacks on our streets. Our brave Armed Forces took on al-Qaeda and, alongside Nato, drove them to ground.

Eventually its leader Osama bin Laden was hunted down by US forces and killed. We were safer here because of what our lads were doing over there.

Once a new government was in place, schools flourished while roads, bridges and power generators were built in one of the world’s poorest countries.

Three million women were given an education each year — and this cannot be undone.

You cannot unlearn what has been learnt. You cannot revisit a life saved from a plot foiled. I know these hard-won victories will make the scenes we are seeing now even harder.

What was agreed by US President Trump in 2020 is done. And so we are on our way home. I was always taught in the Army that how you leave something is as important as how you take something over.

CANNOT UNLEARN WHAT HAS BEEN LEARNT

So we must do our very best, to the very end, to get out all those who helped us when we were there.

That is why my team of military and MoD civil servants are risking their lives in Kabul to bring back as many people as we can who risked their lives for us.

Last year, myself and Home Secretary Priti Patel started a process to accelerate the resettlement of former UK staff. As things worsened, we expanded the scheme further.

The sheer speed of the Afghan government’s collapse caught the whole international community by surprise. But that isn’t going to stop us.

To date we have brought back over 3,400 Afghan staff and their families.

And we will bring back thousands more. We shall keep on going until we can’t.

And after we have left, we shall keep the scheme open from abroad.

We owe a debt to those brave Afghans who risked their lives to support our military. I intend to honour that debt.