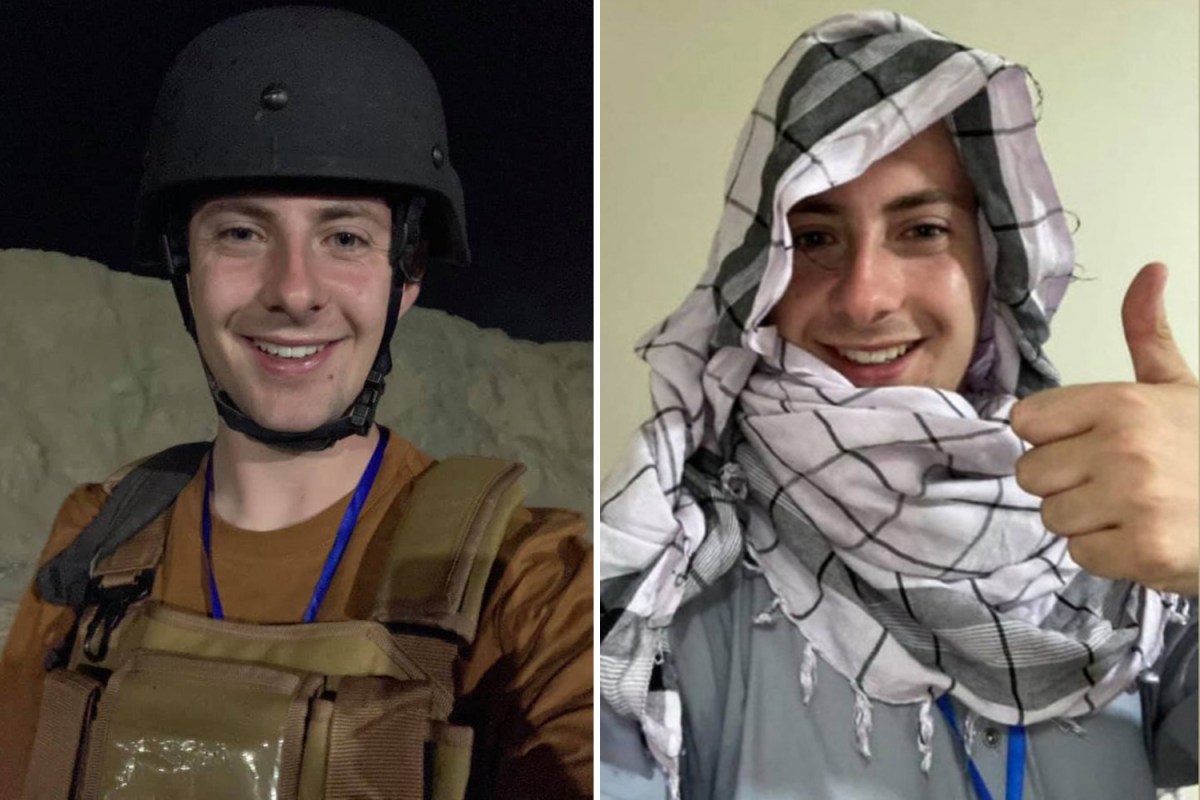 
A BRIT who claimed he was stuck in Kabul after going to Afghanistan on a holiday has been “evacuated”.

Miles Routledge, 24, said he picked the bizarre holiday destination after googling “the most dangerous cities to visit” – but it soon “got way out of hand.”

Yesterday he was hiding out in a UN safehouse after trying to flee the war-torn city several times.

But now he has said he finally been rescued from the Taliban territory.

The Loughborough physics student from Birmingham documented his alleged escape on Facebook, alongside a smiling photo of himself in army gear.

“Couldn’t message as there were cars emitting signals that would set off bombs.

“It blocked my airpods from connecting so I think it blocked all wifi/data.

“The Taliban let us go through the airport and we met many of them.

“Very long transition period but everyone was smiling and waving at one another, some took selfies with them.

“I slept on a dirt/gravel road and woke up as cars went by.

“We’re in a new safe house and we’re all hydrated, happy and ready for a few hours of sleep.”

Miles had been documenting his odd trip on Twitch, the live streaming platform, and on 4chan, the message board site linked to viral memes and pranks.

As thousands of desperate Afghans try get out of the country after the Taliban victory, Miles had said he believes he will be safe because of a £15 joke purchase which gives him the right to use the title “Lord” – which is seen on his American Express card.

Despite Miles’ optimistic outlook, Miles’ mum, Susan, was too distraught to speak at the family home in Sutton Coldfield about her son’s situation.

She told The Sun Online she was urgently waiting for a call from the Foreign Office to find out whether Miles will be kept safe as Kabul residents woke up on Monday to their first day under Taliban rule.

And a pal at Loughborough University has now revealed Miles had wanted to do “something weird during summer to show off about” in September.

The meme-loving student had posted about his plans for the “insane” trip on online university forums before setting off on his holiday, his friend said.

“Miles is definitely in Afghanistan – 100 per cent. He’s genuinely there. People might think it’s an elaborate hoax but it’s true,” he told The Sun Online.

“But I think it just spurred him on. He’s a joker – he just wanted to do something weird during summer to show off about.

“This seems like an elaborate real-life meme gone way too far.”

He added: “This is a joke that’s just gone way out of hand. He wanted to come back in September with a story to tell about how he went to Kabul.

“The madness and the danger doesn’t appear to have crossed his mind.

“He posted on Reddit saying he’d bought a knife to protect himself. He said, ‘If I go down, I want to go down guns blazing’. It’s ridiculous.

“He’s definitely not a fighter. He couldn’t handle himself against a uni student – let alone the Taliban.”

Miles was planning to spend a few weeks in Kabul before going to Albania and flying back to England to avoid the UK’s red list, his pal said yesterday.

“This was just his weird summer holiday. It’s not like he’s going there because he’s got an interest in what’s happening – he’s only gone there for a joke,” he said.

“It’s insane. Now he’s trapped and he can’t get back.

“I can understand going somewhere for a joke. But going to Kabul while it’s falling it’s just madness.

“He’s literally stuck there and he can’t get back. They’ve pulled out all the troops. It’s just crazy.”

On Sunday, Miles told his online viewers he was “fully prepared for death” and “accepted it”.

“This trip has been a test of God. I’m very religious so I believe I’ll be looked after,” he said.

He added: “I was under the impression that the country wouldn’t fall for another month, so I thought it was going to be fine.

The fanatics have released 5,000 prisoners and taken control of Kabul as the government dramatically collapsed.

It came hours after the Taliban took control of Jalalabad and means they now have seized every city in the war-torn country.