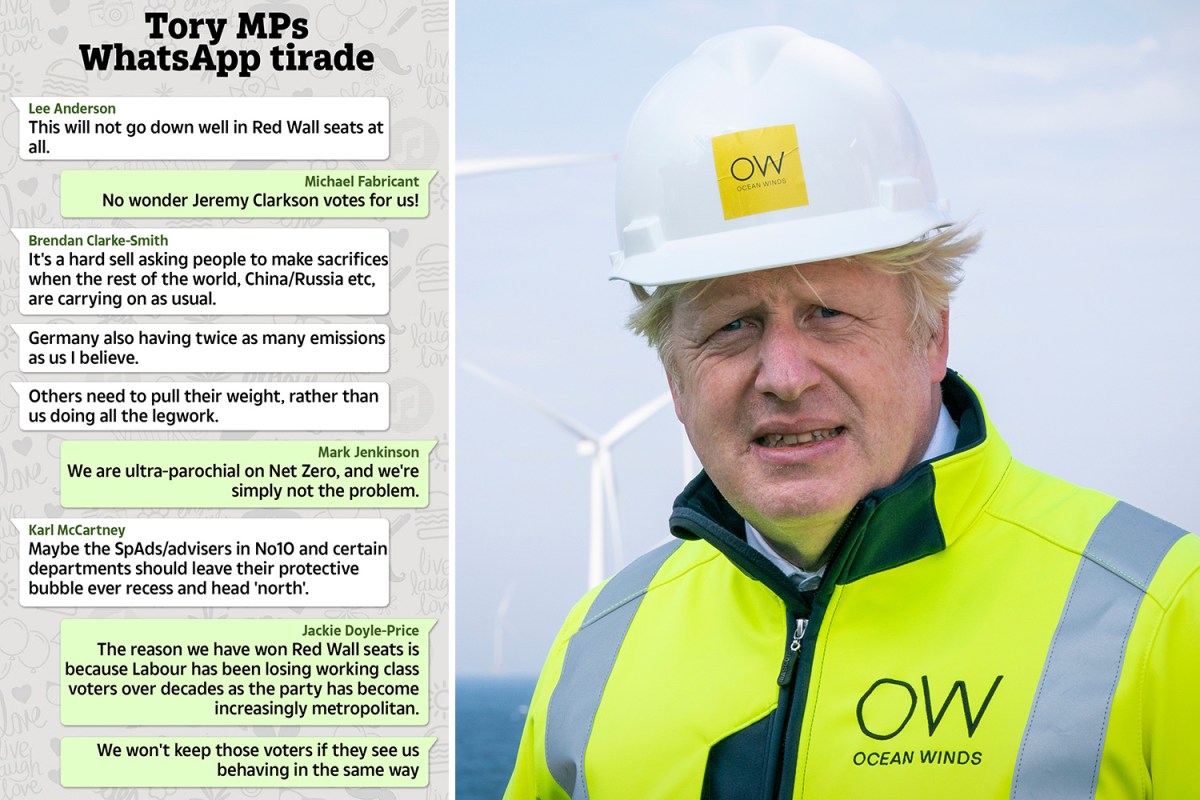 The PM’s Northern troops launched a blistering private assault on the Climate Change Minister in a fiery WhatsApp tirade seen by The Sun.

Stark polling shared in a private text chat for Tory MPs revealed that 44 per cent of all car owners backed the Conservative voters, rising to 47 per cent of all petrol drivers.

Just one in five hybrid-owners backed the party, and nearly seven in ten electric car drivers opted for Labour instead.

With Ministers urging Brits to switch as soon as possible away from combustible engines – tensions boiled over with claims the Tories would be hit hardest by the government diktat.

And they pleaded it would be MPs not ministers who had to sell the plans on the doorstep or risk losing thousands of voters – and even the next Election.

The angry Tories expressed their deep concern over the electoral cost of pursuing green policies, with just three months to go before Mr Johnson hosts a crucial COP26 climate change summit in November.

This will not go down well in Red Wall seats at all.

Ministers are yet to lay out their plans for how Brits will have to rip out their boilers and make their homes more environmentally friendly to meet Net Zero goals by 2050 – over internal wrangling about the price tag.

But Ashfield MP Lee Anderson fumed: “This will not go down well in Red Wall seats at all.”

Former minister Jackie Doyle-Price added: “The reason we have won Red Wall seats is because Labour lost working class voters over decades as the party has become increasingly metropolitan.

We won’t keep those voters if they see us behaving in the same way. We do need to get our approach to net zero right.”

Lincoln’s Karl McCartney added: “All the builders, mechanics, petrol-heads and even EV lovers across the country will be rolling their eyes at this ‘idealism’.

Others need to pull their weight, rather than us doing all the legwork.

“Maybe the SpAds/advisers in No10 and certain departments should leave their protective bubble ever recess and head ‘north’.”

And Bassetlaw’s Brendan Clarke-Smith hit out at the international approach too, adding: “It’s a hard sell asking people to make sacrifices when the rest of the world, China/Russia etc, are carrying on as usual.

“It can’t happen overnight – and others need to pull their weight, rather than us doing all the legwork.”

Workington MP Mark Jenkinson, who has rallied against the decision to hit pause on a new coal mine in Cumbria, warned of the risks of shutting them all down to simply buy it all in from China and Russia to make steel.

And he warned that developing countries benefiting from coal at the moment were never going to get on side ahead of COP26.

He stressed: “We are ultra-parochial on Net Zero, and we’re simply not the problem.

“We’re pulling up the drawbridge and expecting others to leapfrog the path we took to prosperity. It hasn’t happened in any developed country.”

Another added: “You cannot make steel without burning coal – fact.

“Of course we have to reduce emissions, but chasing after headlines without the proper consideration of the economic impact is idiocy.

“We have been trying to save our steel industry for the last ten years – on the basis of this, we shouldn’t have bothered.”

However, Lichfield MP Michael Fabricant joked: “No wonder Jeremy Clarkson votes for us!”