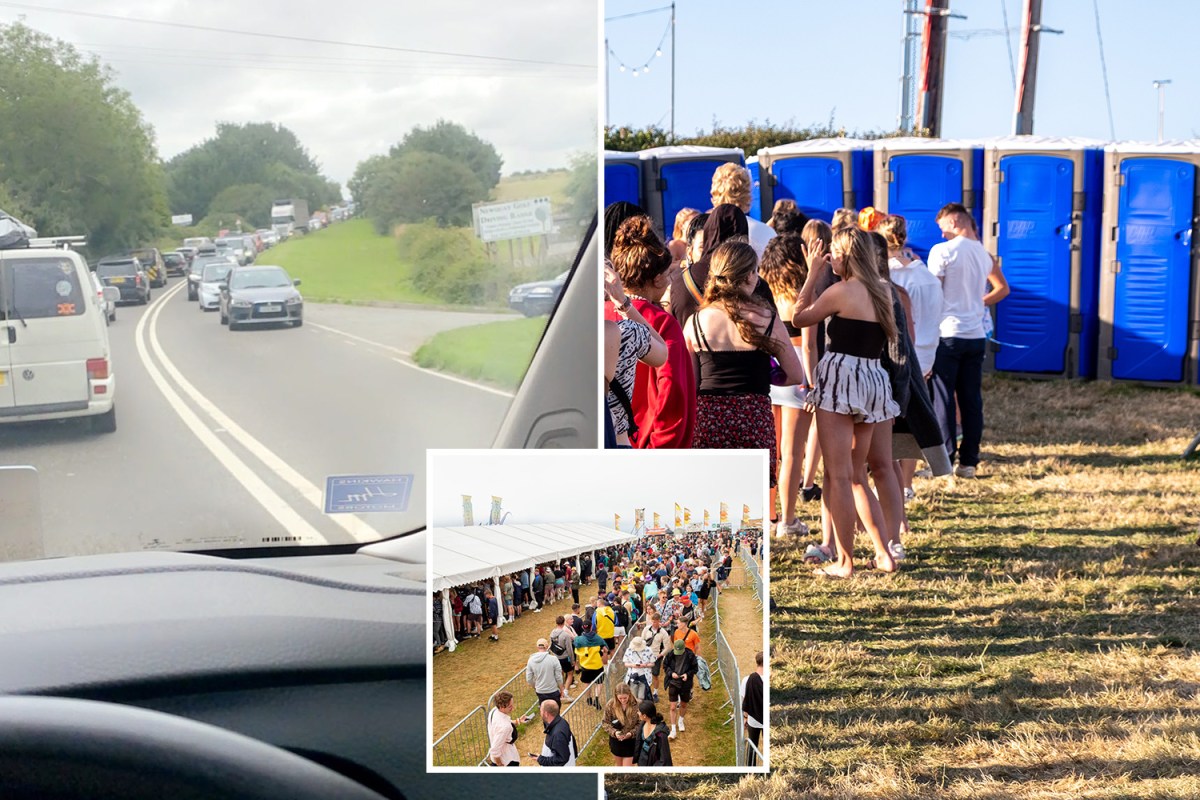 
FESTIVAL revellers were trapped in 16-HOUR traffic jams during a day of chaos on Cornwall’s roads – as hundreds blast event organisers over delays and “disgusting” toilets.

Party-goers who visited Boardmasters at the weekend say they were stuck in huge queues at the festival site in Newquay without water, food or the use of a toilet.

And others have hit out after portaloos on the site overflowed, with one visitor claiming there were just four toilets for every 10,000 people.

Thousands of people were trapped in the car park yesterday as they attempted to leave Watergate Bay.

Festival organisers blamed roadworks on the A30 after a campervan burst into flames on Saturday.

But tempers quickly frayed, with visitors claiming they’d been “abandoned” by stewards.

And tensions only worsened when Boardmasters promised in a tweet the site would be clear by 1.30pm – when cars were still stuck at 6.30pm.

Meanwhile, those who had travelled the farthest abandoned their attempts to leave the county during the evening, instead opting to stay at hotels overnight rather than battle more delays.

One attendee said she’d left the campsite at 11am – and finally returned home at 3.30am.

A row has now broken out over who is responsible for the mayhem.

Boardmasters officials say the A30 delays are to blame – but Highways England said queues stretched for just 15 minutes at their worst point.

Finn Caddy Lee, who lives in Somerset, said he and two friends had been stuck for nine hours with “two bottles of water, no toilets and no food”.

He told the BBC: “We’ve got a six-hour journey back and we’ve been abandoned here.

“It’s just disappointing. We spent all the money on the tickets and they just leave us to fend for ourselves in a car park.”

And his pal Amy Cracknell said they had moved just 10 metres since beginning their journey, before finally beginning to make progress at 5.20pm.

She said: “We were just at a loss. There was no one to help.”

Will Thomas, from Twickenham, was trapped for six hours and said it was “absolute chaos”.

He said: “They opened up a section of fence to let people out and everybody just went for it.

“We saw a lot of close calls between cars trying to get out. It was a proper free-for-all.”

Three friends from Darby attempted to leave the site at 7.50am – but eventually gave up altogether.

Alex, Sammi and Niamh told Radio 1 they’d sat in the car park for hours before abandoning the site and getting a hotel.

The friends left Cornwall at 4am, finally returning home after 9am.

We were at a loss. There was no one to help

Others have taken to social media to blast the organisers.

One said: “Sick festival but you should be ashamed charging £7 for a can of beer yet not even cleaning the four portaloos you provide for 10,000 people.

“And that car park was a nightmare. The organisation was non-existent.”

Another said: “The toilet situation was pretty bad, they kept closing any we tried to use by 10pm on Friday, and none had any sanitiser, just one long sink with soap for each toilet area.”

The festival went ahead for the first time since 2018.

It was unable to take place because of Covid last year, and in 2019 was called off hours before gates were due to open over storm warnings.

Organisers apologised for the toilets – admitting “at times” facilities were “not up to the high standard festival-goers have rightly come to expect”.

A spokesperson said: “On Thursday morning we were let down by a significant number of toilet cleaning staff who became unavailable to work at very short notice which, alongside a faulty tanker, caused a delay to the cleaning schedule.

“The staffing issue was not related to Covid-19.”