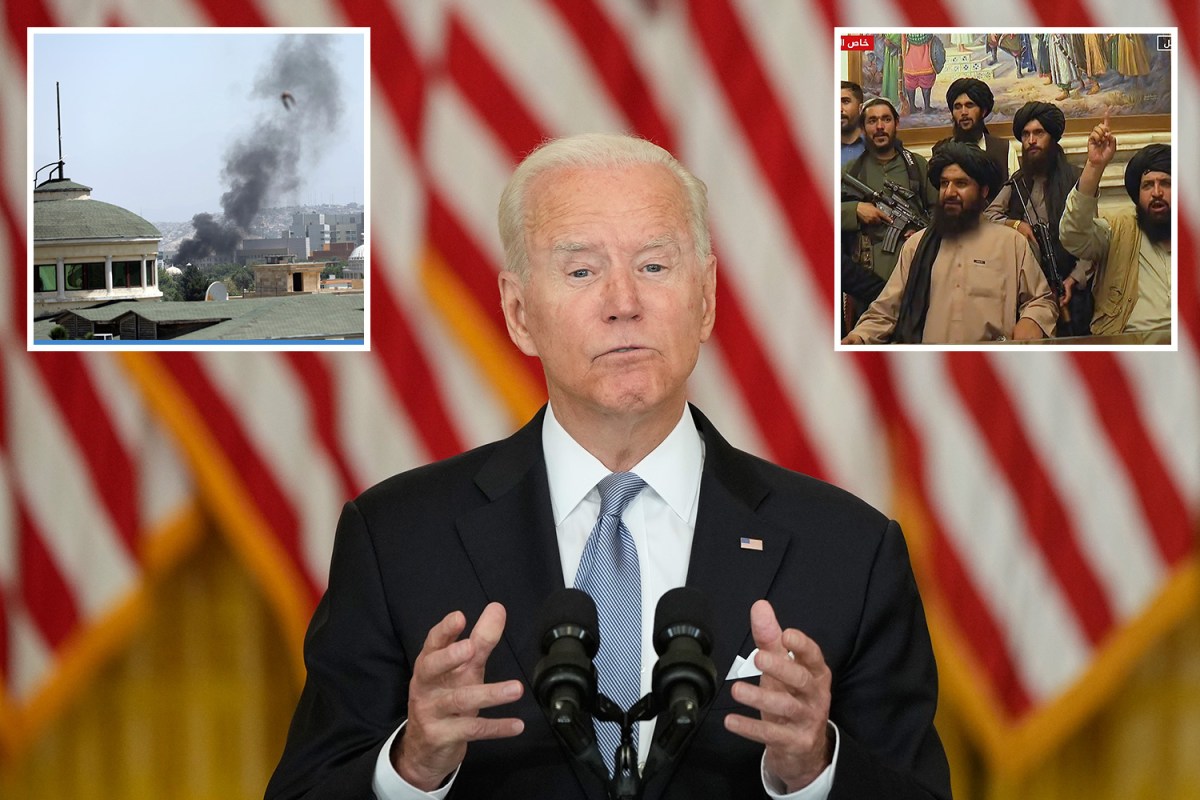 
JOE Biden’s statement about the crisis in Afghanistan was branded “one of the most shameful” in American history as he was accused of “washing his hands” of desperate Afghans.

The president doubled down on the decision to withdraw troops ahead of the 20th anniversary of 9/11 as he slammed the Afghan government for “giving up” in the face of Taliban militants.

Biden’s handling of the crisis has been compared to the “Fall of Saigon” – a humiliating US retreat that effectively marked the end of the Vietnam War.

Media outlets in both the US and UK condemned Biden’s address to the American people.

The Sun said: “There has to be a better way to exit than this shambolic headlong retreat that sold millions of ordinary Afghans down the river and will haunt the West for decades, if not centuries, to come.”

Fox News presenter Will Cain called for Biden to resign as he described the address as a “masterclass in doublespeak”.

Biden continues to receive a barrage of criticism from politicians across the divide.

Democratic Rep. and former Air Force veteran Chrissy Houlahan told CNN: “These past few days have been difficult to process, and not because the Taliban’s progress was surprising.

“In fact, the opposite. We sounded the alarm, and our dire warnings fell on deaf ears.”

Lawmakers accused Biden of trying to “blame others” as the president explained the decision to withdraw troops stemmed from a deal Trump negotiated with the Taliban.

Biden claimed he had two options – either to honor the agreement or to deploy American soldiers.

Rep. Elise Stefanik quipped: “Joe Biden tries to pass the buck. The American people will see him for what he is.

“A weak, feckless leader UNFIT to serve as the President of the United States.”

The Republican congresswoman called for Biden’s “speech-writers” to be fired.

Senator Lindsey Graham said: “The Biden speech was a pathetic attempt to shift blame and an unnerving analysis of the situation he – and he alone created.”

Joe Biden’s address was beyond disappointing.”

Meanwhile, Ted Cruz said: “Joe Biden’s address was beyond disappointing. Instead of blaming others, Joe Biden owes the American people a real explanation of what went so wrong so fast in Afghanistan.”

The backlash came after Biden admitted that he was surprised by the speed of the Afghan government’s collapse.

He told Americans that “he stands squarely” behind his decision to withdraw troops and has no regrets.

He blamed the outgoing Afghan administration, accusing leaders of “giving up without a fight”.

The president reiterated that American troops shouldn’t be fighting in a war “that Afghan forces are not willing to fight themselves”.

It comes as the president was accused of being “oblivious” to the terrorist threats the Taliban poses to the US.

Senator Graham told Newsweek: “It’s only a matter of time until al-Qaeda re-emerges in Afghanistan and presents a threat to the American homeland and western world.”

Department of Homeland Security officials fears that foreign terrorist organizations could be motivated by the 20th anniversary of 9/11.

Former President Donald Trump called on Biden to “resign in disgrace” following the Taliban’s advances as they took control of Afghanistan.

In a statement, he said: “It is time for Joe Biden to resign in disgrace for what he allowed to happen in Afghanistan, along with the tremendous surge in Covid, the border catastrophe, the destruction of energy independence, and our crippled economy.”

Boris Johnson appeared to blame the US for the advancement of the Taliban in the country.

He said the “difficult” situation had been exacerbated by Biden’s decision to withdraw troops from the war-torn country.

Video footage appears to show two people “falling to their deaths” after being thrown from a C-17 aircraft that had just taken off from Kabul airport.

And, a stampede on the airfield left at least seven people dead.

It’s feared that the Taliban government could mean a repressive regime, particularly for women and girls.

They were brutalized and oppressed – with cruel tortures and public executions – when the militant group ruled Afghanistan in the 90s.