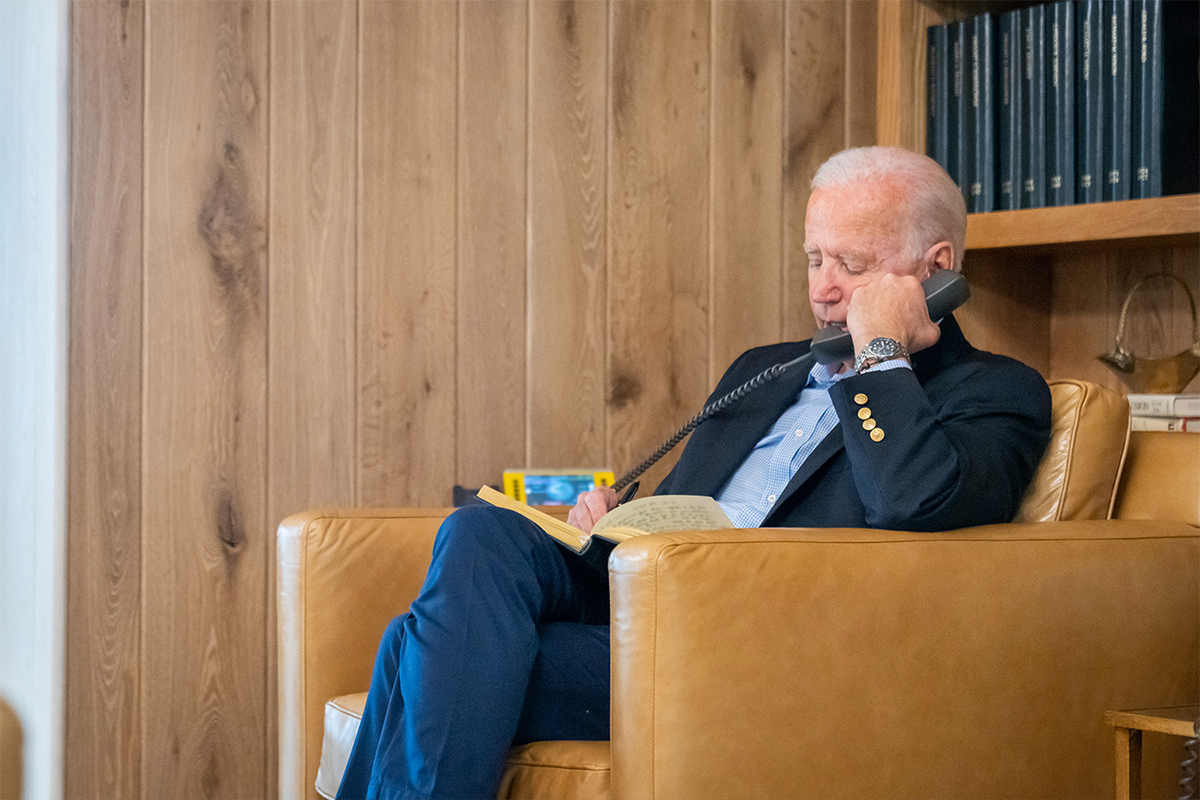 
REPUBLICAN leaders have criticized President Joe Biden for taking a long weekend out of the spotlight while major cities across Afghanistan fall to the Taliban.

According to the White House, Biden will remain at Camp David through Wednesday, August 18, and there are no public events scheduled.

Biden took no questions when he left the White House for his Wilmington, Delaware, home on Thursday, before making the trip to Camp David on Friday.

The President – who was accompanied by his wife, Jill, who walked with a crutch following foot surgery – did not speak to reporters en route to Camp David, either.

On Friday afternoon, the White House said in a statement: “Earlier today, the President was briefed by members of his national security team on the ongoing efforts to safely drawdown the civilian footprint in Afghanistan. He will get further briefings later today.”

A later tweet from the White House account showed Biden sitting in a leather chair on the phone.

But the president’s absence form public view during such an intense time overseas has riled some Republicans.

House Minority Leader Kevin McCarthy of California said Friday that Biden “must immediately focus all efforts on making sure there is a plan to safely extract all American service members and civilians still remaining in Afghanistan.”

McCarthy added: “He also owes the American public an answer on what he plans to do to make sure the region doesn’t turn into a breeding ground for more violent extremism that will lead to large-scale global attacks of terrorism.”

Reschenthaler, an Iraq War veteran, told the New York Post, “this strategy of putting your head in the sand and not taking questions is a way to not get associated with his military debacle.

The Afghan military, built up by the U.S. during its 20 year presence in the country, has collapsed to the Taliban forces at rapid speed over recent days.

Since May, 15 cities have seen Afghan security forces fall under Taliban pressure – despite the U.S. spending more than $83 billion in supporting the Afghan military over the past 20 years.

The most recent round of Taliban attacks had been swift and effective, resulting in mass surrenders and millions of dollars of America-supplied equipment being seized.

The crisis comes as the U.S. prepares to remove most troops by August 31.

On Friday, Biden ordered the “temporary” deployment of 3,000 troops to Afghanistan to help evacuate Americans from the US embassy in Kabul.

Pulling out of the country after 20 years of war received both bipartisan support and opposition.

Former President Donald Trump, who began the withdrawal process, also slammed Biden for his handling of the situation.

Trump said Friday: “I personally had discussions with top Taliban leaders whereby they understood what they are doing now would not have been acceptable.”