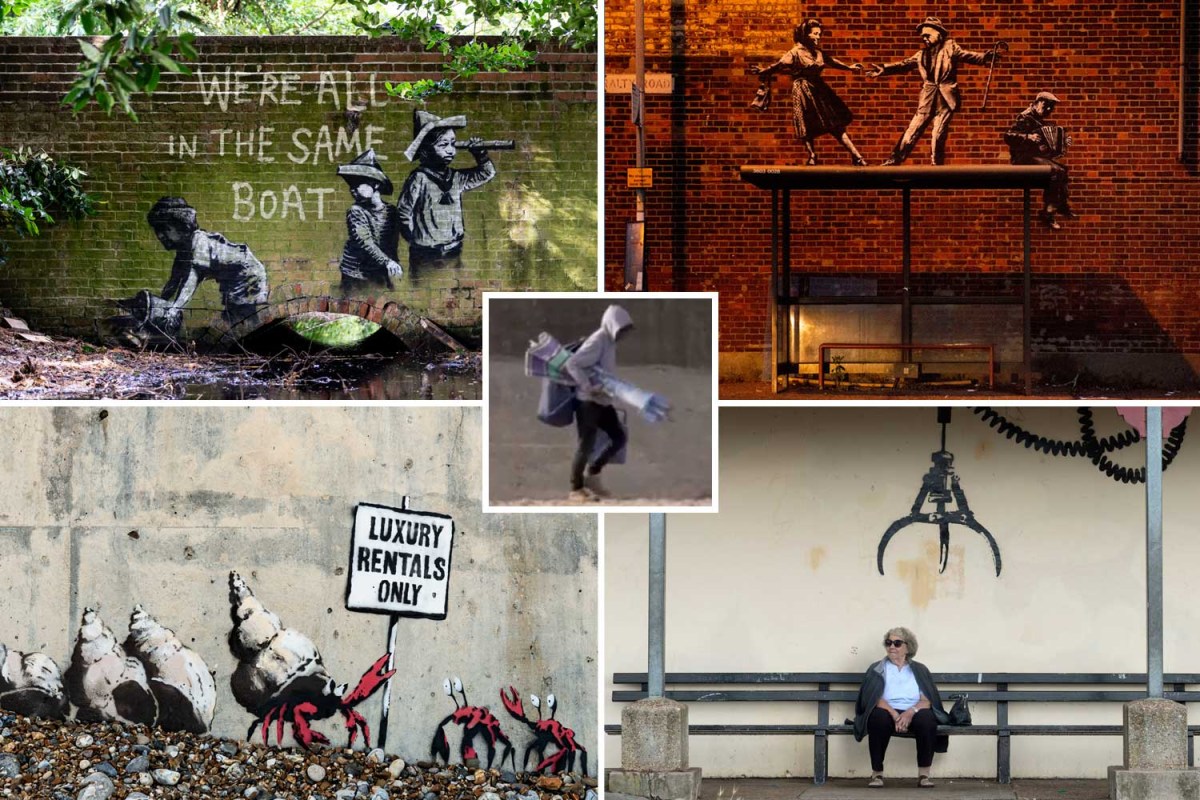 
BANKSY has confirmed he was behind a series of spectacular street artworks that surfaced in Suffolk and Norfolk.

The elusive spray painter took ownership of the pieces that began appearing a week ago and even filmed himself in the act.

He confirmed his work in an Instagram video that he titled, “A Great British Spraycation”, showing him travel to each location in a campervan armed with a cool box filled with spray paint.

Crowds have flocked to see the murals that seem to have been inspired by Brits opting to holiday at home this year.

The first magnificent mural of a couple appearing to dance on top of a bus top shelter, with a man playing the accordion perched on the edge, popped up in Admiralty Road, Great Yarmouth.

Another genius graffiti work was spotted soon after in Gorleston, of an arcade-style grabber machine claw descending from a shelter.

At the area’s model boat pond, he also painted a scene showing two children in an inflatable boat being launched in the air as a man pumps it up while swigging from a bottle.

Banksy’s revealing video also showed the work he put in behind the scenes to create his eye-catching grey and white piece of a child holding a crowbar.

The artwork that appeared in Lowestoft seemed to show the child gripping the tool in front of a pile of sand – and he completed the look with a sandcastle on top.

The concealed creator, famed for his clever designs, even made a brief cameo in the clip – but remained masked by a grey hoodie.

The video even included reactions from the public – with one woman describing it as “mindless vandalism” – but others were left in awe of the art.

Banksy bore further inspiration from the British seaside in Lowestoft and produced a piece showing a giant seagull stealing “chips” from a skip.

His other brilliant work in the coastal town included a cocktail-sipping rat relaxing in a deckchair on the sand.

In Oulton Broad, another mural showed three children sat in a boat alongside the words “We’re all in the same boat,”.

The boat was even constructed out of scrap metal – but has since been removed.

Another comical piece was seen in Cromer of a gang of hermit crabs, much to local’s delight.

The prankster even put an ice cream in the hand of a statue in King’s Lynn and amusingly stuck a tongue out of its mouth.

Banksy then proved no job is too big – or too small – for his abilities by adding some artwork to the Merrivale Model Village in Great Yarmouth.

He daubed the slogan “Go big or go home” alongside a stencilled rat, before signing it with his signature tag.

The Spraycation series has been applauded by locals, with some suspecting it could have been Banky’s way of helping the areas secure their City of Culture bids.

The councils of the Great Yarmouth borough and East Suffolk submitted a joint proposal in July to become the 2025 UK City of Culture.