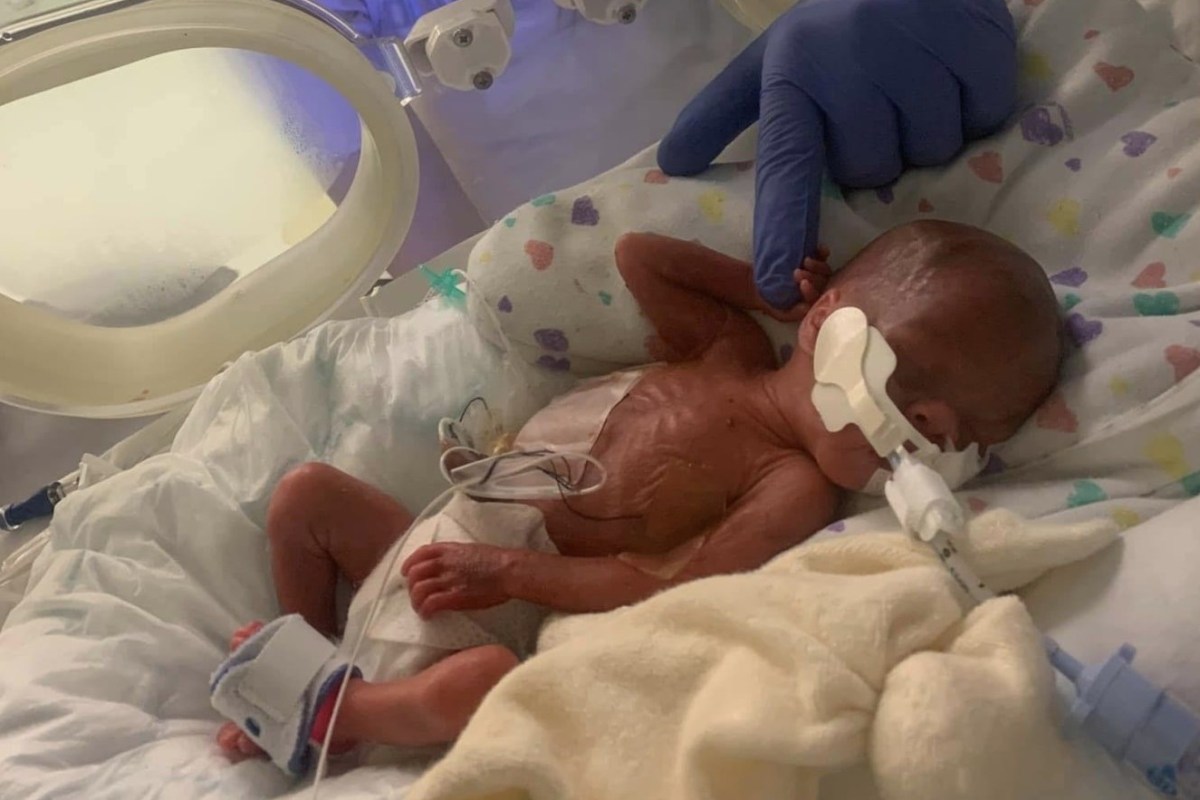 
A TINY baby boy died in his mum’s arms aged just seven weeks – as his parents have praised him as their “little fighter” for battling a devastating condition.

Missy and Nicole Kennedy, from Darlington, Country Durham, were left heartbroken when their son Harley Robert Kennedy died after being diagnosed with necrotising enterocolitis (NEC).

The tot was born 16 weeks early, weighing 1lb and 6oz, and spent seven weeks of his life defying the odds – and even survived three operations at Newcastle’s Royal Victoria Infirmary.

He  was diagnosed with NEC, a serious condition that can affect newborn babies where tissue in the bowel, small and large intestines becomes inflamed.

Harleys heart stopped moments after he was born on January 31, but doctors were able to revive him and rushed him to intensive care.

He was placed in an incubator before being put on a CPAP machine, with his parents waiting 12 days before they could even hold him.

Because of the pandemic and Covid restrictions they were only allowed to see him for two hours every day.

Harley was born at 24 weeks, after doctors missed that his mum’s water had broken three weeks earlier.

This meant that the tot didn’t have extra time for his organs to develop, with the “little warrior” falling even more ill when his kidneys started to fail and he developed an infection in his stomach.

Speaking to TeesideLive his mum Missy, 22, said: “We were told he wouldn’t be able to open his eyes but he did and they stayed open through everything.

WHAT IS NECROTIZING ENTEROCOLITIS (NEC)?

NEC is a serious illness in which tissues in the intestine become inflamed and start to die.

This can lead to a hole developing, which allows the contents of the intestine to leak into the tummy. This can cause a very dangerous infection.

NEC can be difficult to diagnose, but the symptoms tend to include general signs of illness, problems feeding or vomiting, and a swollen and tender abdomen.

NEC is the most common surgical emergency in newborn babies and tends to affect more babies born prematurely than those born full-term.

Doctors believe it appears to be becoming more common, but it is likely that this is because more premature babies are surviving.

“He went through so much and he really was a little fighter. He brought our whole family together.

“The day after we held him for the first time he got really poorly, the feeding tube had moved and caused a bleed on his lung.

“Doctors were trying to correct that and a stomach infection he was fighting.

“His kidneys were failing and he hadn’t had a wee in almost 22 hours so he was put on an oscillator. At this point, he had suspected NEC but they didn’t think he would recover from the stomach infection.

“They really didn’t think he was going to make it so we had him christened and our families were allowed in for the first time to meet him.

“It was heartbreaking to think that was the first and last time our family would meet our little boy. But he kept fighting and he was well enough to be transferred to Newcastle’s RVI.”

Harley was diagnosed with NEC at the Newcastle hospital at just four weeks old, and had his first operation where doctors removed his small intestines and three-quarters of his bowel and gave him a stoma.

But a week later scans showed  further leaks in his bowel and Harley needed a second surgery, with surgeons disconnecting his whole bowel due to nine leaks.

Further scans detailed that he had brain damage, and then his entire body began to “swell like a balloon” because of a fluid build up.

Nicole, 20, added: “He was put on adrenaline for extra time but the consultant said, and I’ll never forget those words, ‘we’re not helping him anymore we’re killing him’.”

The tot passed away at seven weeks old on March 25, with his mum’s friends and family hosting a balloon release in his memory.

Missy and Nicole say they have been overwhelmed with the support, with more than £600 was raised to support the couple following their tragic loss.

His parents now want to tell Harley’s story to raise awareness of NEC – a condition that doctors still don’t know the cause of.

Missy said: “We wish we’d known more about NEC beforehand, it affects 10% of premature babies but doctors still don’t know a lot about it.

“It’s almost as if Harley’s still here, there’s not a day that we don’t speak about him, he is and will always be so important to us.

“They all loved him at the hospital. They gave him the nickname of little warrior on the ward. He was the baby who just kept on fighting.”

Nicole, 20, added: “He really did the best he could. We were always looking forward to bringing him home and getting out of the hospital but if I could go back to the hospital for one day despite all the heartbreak I 100% would if I could.

“It was hard being just 19 and 21 but I feel like we did everything we could with him for seven weeks.

“Through everything, he still brought so much joy.”