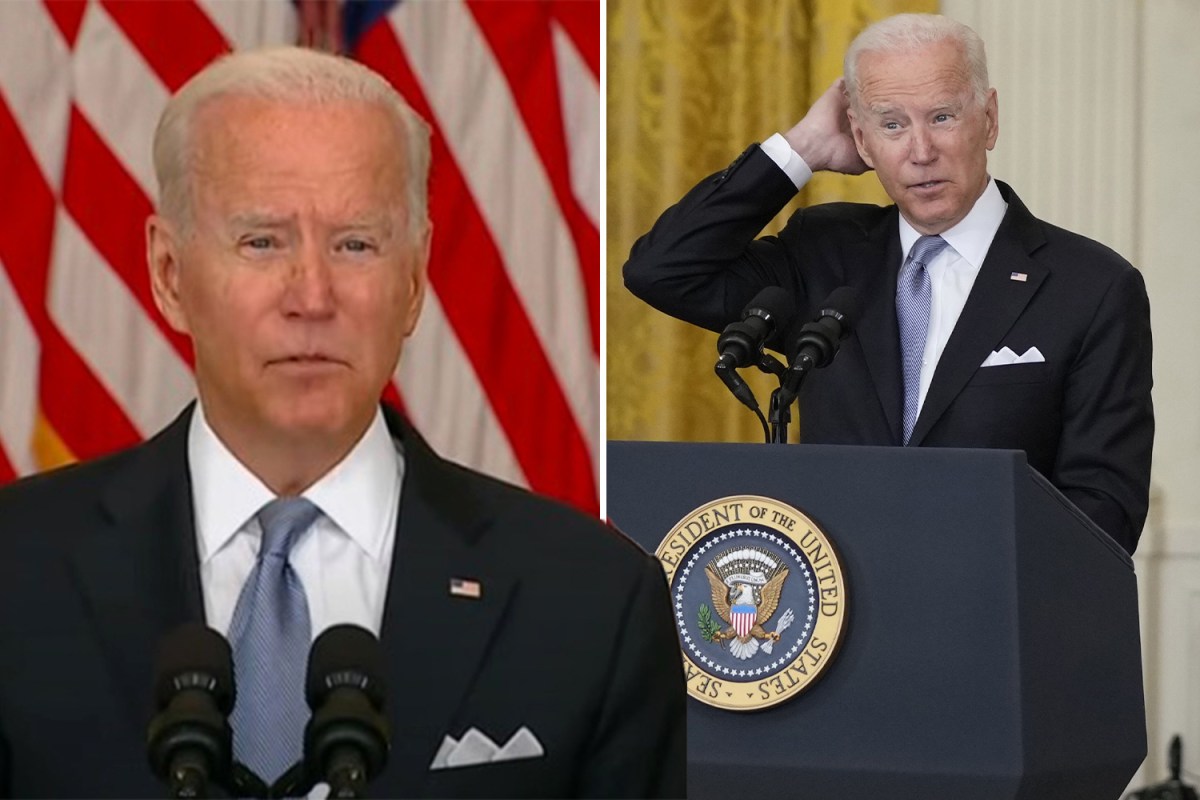 
JOE Biden was “so weak” during last night’s speech that he “couldn’t even look at the audience” as he blamed Afghans for the Taliban rout, a body language expert says.

President Biden took the airtime to heap blame on the outgoing Afghan administration and army, which he said had “collapsed, sometimes without trying to fight”.

“It is wrong to order American troops to step up when Afghan forces would not,” he said.

“American forces cannot and should not be fighting in a war and dying in a war that Afghan forces are not willing to fight for themselves.”

‘HE LOOKED WEAK AS BEST’

James said Biden’s body language as he made his address “looked weak at best and over-compensatory at worst”.

She says a tell-tail sign is when he raises his right index finger when talking about hunting down Osama bin Laden.

“These hand gestures are weakly performed though”, she says, adding there is “no strength or tension in his hands or fingers to suggest a strong will or decisiveness”.

“When he says the words ‘I’m adamant’ he performs a very weak version of what should be a powerful thumb-clamp gesture.”

Biden revs up when he blames the Trump administration for the current chaos but changes tone when he talks about the “escalating conflict”.

There, the President reverts to a soft, move creative-looking lidding rather than the kind of strong precision gestures that might reassure American public watching at home.

When he starts talking about standing “squarely behind” his decision to withdraw US troops, he raises two fists in a bid to exude strength and commitment but, as James explains, “the fists appear after the words have begun, making them look like performed add-ons”.

James says that when we’re being genuinely emotional or emphatic that our gestures usually precede our words.

But when words come first it “will look like more like a desire to convince the audience of something we have no real belief in”.

‘LITTLE OWNERSHIP OVER HIS WORDS’

As bumbling Biden tries to level with the US public and promises to “be straight with you”, he’s fixed on his autocue rather than looking straight at his audience.

Eye contact is crucial at this point, James explains, because without it Biden “looks as though he had little ownership over the words he was reading”.

“This constant reading word for word suggested anxiety rather than calm control,” she explained.

“He was glued to the script with no apparent confidence to address the world more personally.

“This suggestion of inner anxiety or nerves also appeared in the way he swept out of the room without answering any questions.”

Biden has been slammed for the pull-out of US troops from Afghanistan, which many say has lead to people desperately clinging on UK aircraft leaving Kabul and dying.

Senior military officials say the chaos at the Kabul airport on Monday left seven people dead, including some who fell from a departing American military transport jet.

“It is time for Joe Biden to resign in disgrace for what he allowed to happen in Afghanistan, along with the tremendous surge in Covid, the border catastrophe, the destruction of energy independence, and our crippled economy,” a statement by the former President statement said.

Biden also suffered a ratings slump as a result.