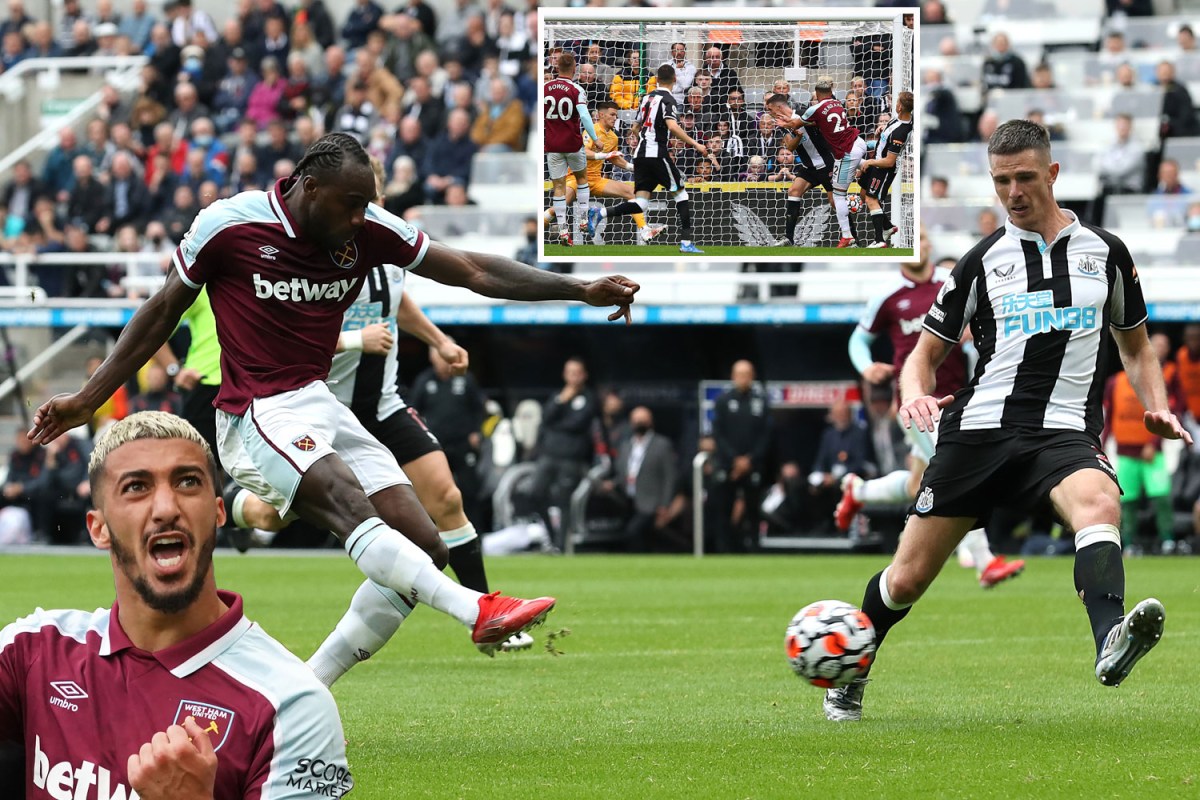 
SO much for an underwhelming summer in East London.

With not a penny spent and Jesse Lingard still at Manchester United, Hammers fans were angsty.

David Moyes was hardly chipper himself on the eve of the season at having a weaker squad than the one that ended last year’s brilliant campaign.

Well, on this evidence, after a thrilling 4-2 win at Newcastle, things are looking very rosy indeed.

Up in the gods at St James’ Park, Irons fans implored owners David Gold and Sullivan to ‘spend some f*****g money’ early on.

By the end they were in dreamland, singing of European tours and winning the league.

And while the squad certainly needs strengthening to compete on two fronts, this was some statement.

Under the pump at the beginning, they twice came from behind through Aaron Cresswell and Said Benrahma.

Not the greatest start, but once they found their groove they left the strong impression that finishing sixth is not out of the equation again.

Whereas the Magpies grew wearier the longer the game went on, the opposite was true for the Hammers.

Tomas Soucek slammed home the rebound after Michail Antonio’s missed penalty 63 minutes in, with the striker getting his goal to make it four moments later.

In the sodden north east, the atmosphere grew steadily as the Geordie hordes descended on their place of worship after so long.

And St James’ Park was at fever pitch when Joe Willock appeared before kick-off to salute the Toon Army after sealing a £25million from Arsenal.

The midfielder was not registered in time to play, and it was almost the worst start possible for Newcastle when Soucek’s header was cleared off the line.

But the roof came off after five minutes when Wilson got on the end of Saint-Maximin’s cross.

Put on a plate for the new No 9, the French magician deserves all the credit.

Making mincemeat of Declan Rice down the right, Saint-Maximin shimmied right, left and right again before whipping in an inch-perfect near-post cross.

Briefly silenced, the packed out away end were giving it large again when VAR overturned a disallowed goal.

Creswell’s low fizzer across goal went through Soucek and looked to have been turned in by Jarrod Bowen at the back post before he was flagged for offside.

Bowen then wasted a great chance after dancing through two challenges before Wilson’s cheeky back-heel was well saved.

Miguel Almiron had one deflected off the bar, and the Mags were pushing again towards the end of a pulsating half.

The reward came in the 40th minute as the Hammers were made to pay for not clearing their lines.

Almiron and Matt Ritchie worked it neatly down the left and the Scot put a teasing ball to the back post.

From one wing-back to another, boyhood Newcastle fan Murphy popped up to catch everyone off guard and nodded back across goal past the rooted Lukasz Fabianski.

Half-time did nothing to dampen this topsy-turvy clash and the East Londoners were back level 53 minutes in.

Rice got his own back on Saint-Maximin, dispossessing him in Newcastle’s half and playing forward to Bowen.

Worked out to Antonio, the striker was forced wide but dug out a cross for the unmarked Benrahama to nod home from six yards.

Two-two, and it was far from over yet.

Now was the time for Moyes’ side to turn the screw, and they were awarded a penalty for Murphy’s foul on Pablo Fornals after Antonio headed a sitter off the woodwork.

Making his league debut for the Toon, Freddie Woodman got down superbly to his left to deny Antonio, only for Soucek to bury the rebound as the Magpies daydreamed.

Just 178 seconds later and Antonio finally found his range as the Irons unleashed a deadly counter to make it four.

Benrahma lead the charge and played the striker in, who got the ball out of his feet before belting a cracker low into the bottom corner.

Newcastle, so promising earlier on, were now a shambles – with West Ham breaking at will.

In the end they were lucky the visitors took their foot off the gas, with a smattering of boos for Steve Bruce’s side on a day that promised so much.

Instead, Moyes’ boys ramped things up when it mattered to lay down an early marker that they mean business again – signings or no signings.