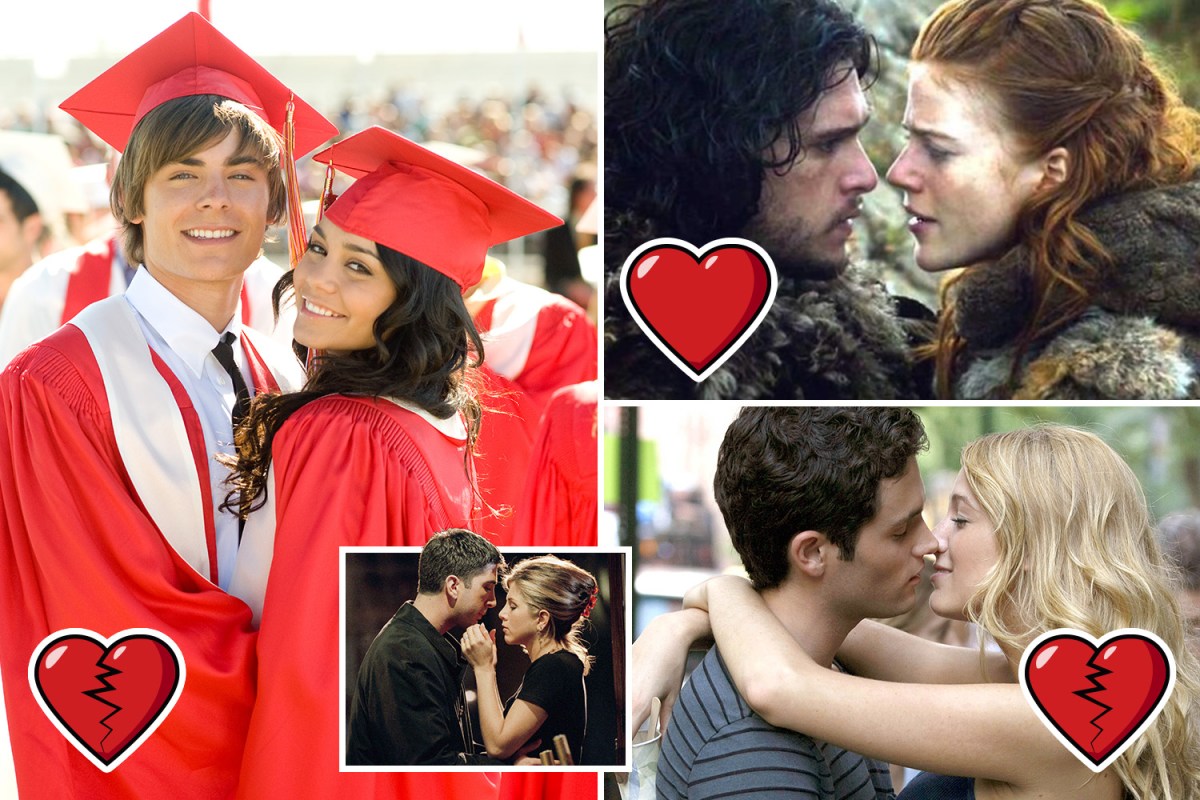 
HAVING to spend hours at work kissing is always going to bring people closer together, so it’s unsurprising that many TV couples end up dating off-screen too.

And Friends fans were momentarily elated when rumours swirled that Ross and Rachel – or Jennifer Aniston and David Schwimmer – were dating in real-life, although David has now denied it.

But plenty of our favourite on-screen couples did also date each other in real life.

We look at whether they lived happily ever after…

And the actors dated for a short time too, getting together when they first started filming – even before their characters started dating.

Katie even called Joshua her “first love” in an interview with Rolling Stone in 1998.

“I’m just going to say that I met somebody last year,” she said. “I fell in love, I had my first love, and it was something so incredible and indescribable that I will treasure it always.”

However, it wasn’t meant to be and they split up a year later.

Game of Thrones definitely didn’t have a happy ending, but Kit Harington and Rose Leslie – who played on-screen couple Jon Snow and Ygritte – seem to have got their happily ever after.

They had their first child in February of this year.

Vanessa Hudgens and Zac Efron were the ultimate teen couple when they shot to fame as Gabriella and Troy in High School Musical in 2006.

Off-screen Zac and Vanessa had been secretly dating since 2005, having had a “connection right off the bat” when they met in auditions.

The pair stayed together until 2010, and Zac even stuck by Vanessa when nude photos of her – then 18 – were leaked online in 2007.

While both have confirmed they’re no longer in touch, Vanessa has said: “I think because I was so young, I think that relationship stabilised me.”

Tom Hardy and Charlotte Riley met on the set of ITV’s Wuthering Heights in 2009, when he played the Heathcliff to her Catherine Earnshaw.

The couple tied the knot in 2014, reportedly in the south of France, and have two children together, a six-year-old daughter and two-year-old son, Forrest.

Adam Brody and Rachel Bilson played couple Seth Cohen and Summer Roberts in The OC from 2003 to 2007, and were dating off-screen for the majority of that time.

They broke up in 2006, but have remained friends.

Rachel recently said she’s “grateful” for the relationship as it was “super helpful and supportive” as a young actor in her first job.

Adam went on to marry Leighton Meester – who played Blair in Gossip Girl – in 2014, making them everyone’s favourite US teen drama crossover couple.

Gossip Girl ran from 2007 to 2012 – and one of the show’s hottest couples was Serena and Dan, who eventually got married.

In reality, Blake Lively and Penn Badgley, who played the couple, were dating too from 2007 to 2010 – although they never spoke about it publicly, and even denied it when asked.

In 2017, Blake said the reason for the secrecy was due to the fear of “ how our personal lives overlapping our work life could be perceived by our bosses”.

And, in 2013, Penn told Elle that the relationship was “good and bad” and a “learning experience”.

Blake is now married to Ryan Reynolds, and Penn to Domino Kirke.